Doughnut? Apple? Bagel? The central image of Robert Rauschenberg’s 3-83-B-25A (1983)—a humble piece of food, pictured at an oblique angle and enlarged to billboard size—remains ambiguous. Although the precise circumstances of this unusual photograph are unclear, knowledge of Rauschenberg’s whereabouts when it was taken suggests a possible context. In March 1983 the artist was traveling in Thailand, Sri Lanka, and Japan; he captured this image while in Tokyo. The following year, his long-standing international interests would find expression in the Rauschenberg Overseas Culture Interchange (ROCI), a major project of 1984–91 intended to spur artistic and cultural exchange. Central to this initiative was an exhibition of his work that brought Rauschenberg and his assistants to a number of politically sensitive areas generally considered outside the mainstream international art circuit. As the show traveled, Rauschenberg worked with local artists to create new pieces for each presentation, and he took photographs to record his impressions and experiences.

3-83-B-25A (a title referring to the artist’s organization of images by date, folio, and negative number) is one of three black-and-white photographs from his 1983 trip to Japan that are known to have been printed, either as stand-alone pictures or for use in other artworks. Rauschenberg was likely drawn to the massively large scale of the image on the billboard, which resembles a giant projection screen. The concentric organization of the composition builds from a round or hollow central form to the ring of food, the pale rectangle of the billboard, the smooth charcoal-toned facade of an anonymous building, and, finally, the cloudless sky. This pairing of competing textures, patterns, and forms evokes the unexpected union of disparate materials that Rauschenberg sought to cultivate throughout his work. At the same time, when considered in the context of his travels, the photograph offers a glimpse into Rauschenberg’s early impressions of Asia, a region to which he would return as part of the ROCI tour. 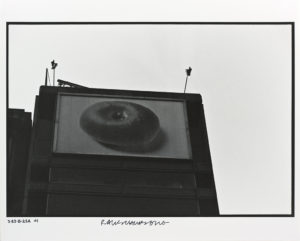 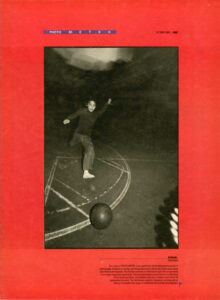 Paul Raedeke interview with Robert Rauschenberg about his photography, 1983