One of the largest of the twenty-five works in Robert Rauschenberg’s Arcadian Retreatseries, Catastrophe (1996) looms over viewers. Comprising three plaster panels, the work has a post and lintel structure that evokes the classical art and architecture represented throughout the Arcadian Retreats, such as the statue of Dionysus and worn stone column visible here. Rauschenberg traveled to Istanbul and Ephesus, Turkey, in June 1996 as a participant in the United Nations Conference on Human Settlements, which explored environmentally sustainable urban development. With Catastrophe, the artist took up the themes of development and change, bringing together disparate and asynchronous imagery to highlight the sometimes oddly juxtaposed layers of history one encounters while traveling in an ancient city. Here, the Dionysus stands in front of a decidedly modern brick wall and intermingles with images of an urban building facade, rusty food cans, and a cast-off table. Musicians, animals, and blooming roses complete the composite landscape, suggesting a cycle of regeneration despite the ruin invoked by the work’s title.

Representing a modern take on an ancient technique, the Arcadian Retreats showcase technical developments in fresco made through Rauschenberg’s experiments with a longtime collaborator, master printer Donald Saff. Printing his photographs with specialized inks and paper enabled Rauschenberg to use water to transfer the images onto wet plaster. This application method allowed him unprecedented freedom to manipulate the photographic impressions and resulted in a fluid, vibrant composition that belies the substantial weight of the work’s three-panel plaster structure. Once the image transfer was complete, Catastrophe was sealed with wax. This smooth, finished surface contrasts with the disintegration suggested both by the architectural forms the work depicts and the watery, dreamlike effect created as the plaster was rubbed and pressed during the image transfer process.

By Roni Feinstein, July 2013
Part of the Rauschenberg Research Project

In the Arcadian Retreat series, of which Catastrophe (Arcadian Retreat) (1996) is a part, Robert Rauschenberg combined images of the ancient and modern worlds in paintings that blend antiquated techniques of picture making such as fresco painting with the state-of-the-art technologies of digital printing. These majestic and physically weighty works exemplify his ongoing efforts to navigate uncharted creative territory and experiment with previously unexplored processes and materials.

Views of the Artwork (6) 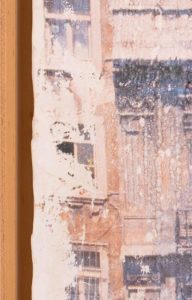 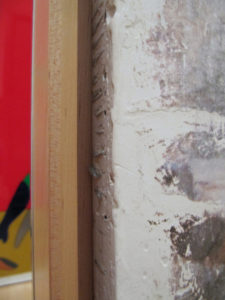 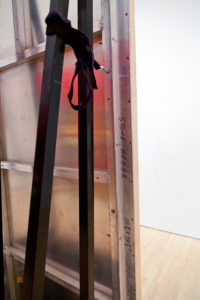 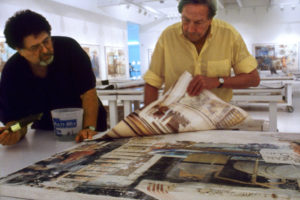 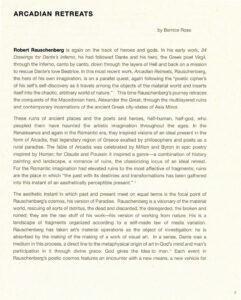 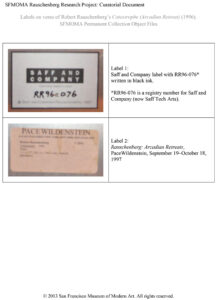