As its title suggests, Robert Rauschenberg’s Port of Entry (1998) explores ideas of home, travel, and arrival. Part of the series Anagrams (A Pun), it also demonstrates the artist’s interest in structures of communication. In an anagram, the letters of a word are rearranged to make a new word. Here Rauschenberg achieved a similar feat with transfer images. Working with photographs printed on transparent sheets enabled him to experiment with multiple arrangements on the work’s three large adjoining panels, overlapping and repeating imagery as needed to create a layered yet unified composition.

In a narrative interpretation, Port of Entry could be viewed as a brief chronicle of the artist’s life. The two framed prints of boats anchoring the central panel reference the work’s title and might also be a nod to Rauschenberg’s birthplace: Port Arthur, Texas. Slightly higher, we find the grill of a New York Engine Company 33 fire truck resting above a pedestrian crossing sign. Rauschenberg gathered much of the material he used in his Combines (1953–64) and other early works on walks around his neighborhood, and many of these images also were drawn from the artist’s local streetscape. The fire engine, for instance, belonged to the firehouse around the corner from his Lafayette Street studio.

Rauschenberg also drew subject matter from his travels. A parade of elephants, a Belgian statue, and street signs and construction materials he photographed abroad overflow from the two outer panels into the center panel of Port of Entry, reflecting the artist’s long-standing interest in foreign cultures. As an artist, Rauschenberg gained access to areas that were difficult or impossible for the average American to visit. He exhibited in Moscow during the Cold War and met Fidel Castro while showing his work in Havana. The photograph of the Tibetan woman in braids on the left panel of Port of Entry, for example, was taken during the Rauschenberg Overseas Culture Interchange (ROCI), which he founded in late 1984. This largely self-financed exhibition project took Rauschenberg and his assistants around the world between 1985 and 1991 and allowed them to meet and collaborate with local artists at each venue. By 1998, when Port of Entry was completed, Rauschenberg had traveled to more than twenty countries.

San Francisco Museum of Modern Art, purchase through a gift of Phyllis Wattis, 1999

Port of Entry [Anagram (A Pun)]

By Roni Feinstein, July 2013
Part of the Rauschenberg Research Project

Over the past twenty years, scholarship on Robert Rauschenberg’s early artistic development has been largely informed by the exhibition and monograph organized in 1991 by Walter Hopps for the Menil Collection in Houston. In the installation and its related catalogue, both titled Robert Rauschenberg: The Early 1950s, Hopps closely examined the groundbreaking experimentation undertaken by Rauschenberg between 1949 and 1954, charting the emergence of the principal themes and motifs that would come to define the sixty-year arc of the artist’s career.

Views of the Artwork (3) 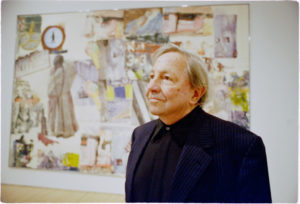 Robert Rauschenberg with Port of Entry [Anagram (A Pun)] at SFMOMA, 1999 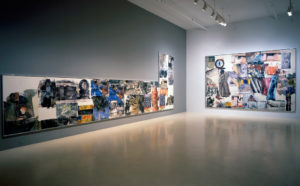 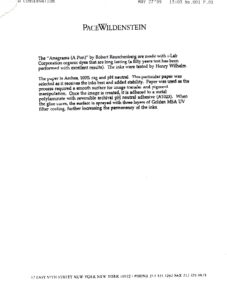