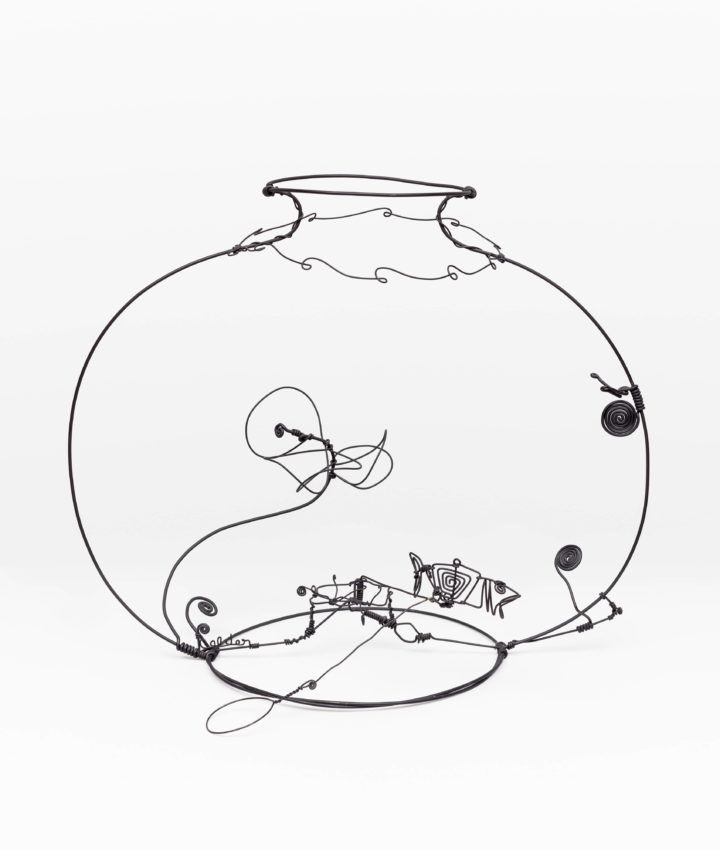 Before Calder made his groundbreaking mobiles, he produced wire sculptures that tested the ways artworks could interact with their environs. In 1929 he compared his creation of figurative wire works, which he had begun exhibiting the year before, to “three-dimensional line drawing.” He explained, “They are still simple, more simple than before; and therein lie the great possibilities which I have only recently come to feel for the wire medium.”

In Aquarium, Calder made an animated underwater world out of modest coils that fold the open air into the crisp illusion of a fishbowl, with the added element of mechanical movement: with the gentle lift of a manual lever, a fish bends and wiggles beneath looping vegetal forms. When Aquarium was first exhibited in 1929 with other wood and metal sculptures at Fifty-Sixth Street Galleries, New York, a reviewer for the New Yorker noted that there was “a good deal more content than is at once apparent in the thin line of wire that he mainly uses for a medium. The manifest irony and the obvious fun that first strike the eye when viewing anything that Calder has created may lead you away from a serious consideration of what he accomplishes.” Building on early experiments such as Aquarium that incorporate empty space into sculptural forms, Calder’s mobiles would go on to interact with subtle currents in the surrounding atmosphere.

Other Works by Alexander Calder