The collaborative choreography of filming ballet — in a shuttered museum.

In early December, a group of ballet dancers created a hum of activity in SFMOMA’s stilled galleries. Over the sky bridge and down the steps they went, zigzagging from the second floor Art Court to the atrium below with joie de vivre. The occasion? A new film dreamed up by choreographer Myles Thatcher in collaboration with the museum and San Francisco Ballet.

The resulting piece, titled “COLORFORMS,” casts ten dancers as art revelers who turn the empty museum into their stage. At once cavernous and intimate, the architecture of SFMOMA comes alive in a jolt of color and movement set to Steve Reich’s Variations for Vibes, Pianos and Strings with featured art by Alexander Calder, Julie Mehretu, Ellsworth Kelly, and Ursula von Rydingsvard. The film found its director in filmmaker Ezra Hurwitz, a former professional dancer.

“This year has been really tough for everybody; it’s been tough for everyone in the arts,” Thatcher said. “I wanted something that encapsulated a lot of joy and gratitude for what this art form is and has done for me.”

SF Ballet originally commissioned Thatcher, a soloist at the company, to create a work for its 2020 spring season. After the pandemic, the company asked him to reimagine the piece for film, encouraging Thatcher to “dream big.” He hitched his wagon to the museum, along with three other locations that appear in COLORFORMS: Yerba Buena Gardens, Golden Gate Park, and the War Memorial Opera House. For his cast, he recruited dancers from various ranks, including Frances Chung, Sean Bennett, Sasha De Sola, Ulrik Birkkjaer, Isabella DeVivo, Cavan Conley, Jasmine Jimison, Esteban Hernandez, Maggie Weirich, and Steven Morse.

“I wanted to strip that austerity out of these spaces and make it feel a little bit more accessible,” Thatcher said.

“My starting point was Alexander Calder’s mid-century mobile, which speaks so kinetically— movement in visual art,” he added. “That work got me thinking about where we are today, and how everything we do affects everyone else. I loved the sense of asymmetry, with pieces connected by an unseen force. If you move one, it affects them all. To me, that was poignant right now.”

Though SFMOMA’s doors were shut to the public during the two-day shoot, the endeavor still required a highly choreographed pas de trois between the ballet company, the museum, and a set of rigorous health protocols. When dancers were filming unmasked, crew within 12 feet had to wear an additional layer of protective equipment. A COVID officer was on hand to wipe down surfaces after each use, and the museum’s HVAC system continually pumped in fresh air. It was a feat that required help from the museum’s janitorial staff, engineering team, registration, and other departments. “On the first scout we had at the museum, I felt like Charlie at the Chocolate Factory, seeing the guts of the machine,” Thatcher said. “I was wide-eyed and amazed to even be there in that capacity.”

Christo Oropeza, an artist and senior public engagement associate at SFMOMA, stepped in to coordinate logistics for the museum. He juggled multiple walkie-talkies, uniting the museum’s engineering team and the production crew. “We were doing pirouettes and dances and leaps with each other as well,” he joked.

“I found it extremely comforting that the particular producers for this production were former professional dancers themselves,” said Oropeza, who has been with the museum for 15 years and also runs an art gallery. “There was this feeling of passion and a great bodily awareness since dancers are so aware of themselves in the space. That part just helped me feel that much more confident that we were all here to do something both phenomenal and professional.”

Because safety precautions limited how many crew members could be inside the building at once, makeup and dressing took place in a trailer outside. Costume designer Susan Roemer put the dancers in attire with a pedestrian air that offers ease and matches the playful irreverence that pulses through the production. 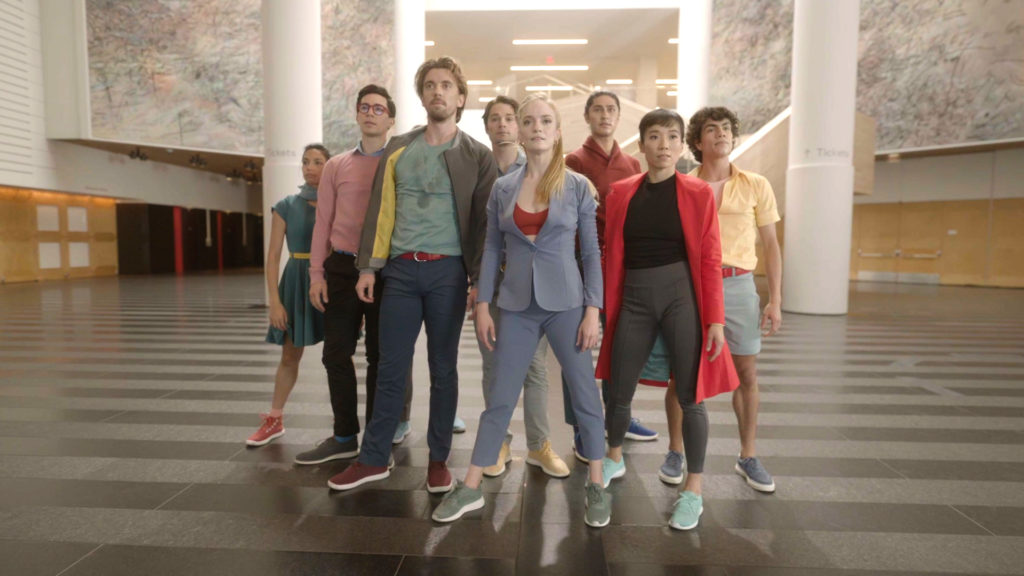 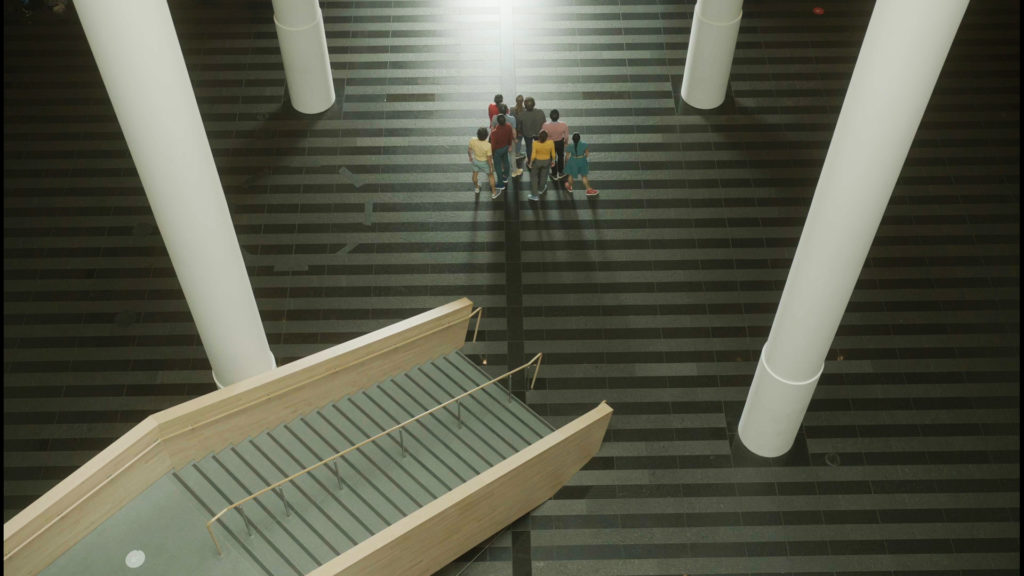 “More than ever, we needed to consider the functionality of the costumes,” Roemer said. “They needed to be straight-forward enough to accommodate dancers getting in and out of them themselves — which isn’t always the case with closures like hooks and eyes, or funky zippers.”

The surface of the museum floor isn’t optimal for pointe shoes — a factor that both Thatcher and Roemer considered at the onset. The right footwear needed flexible uppers, a sole that was durable, and somewhat supportive — not too sticky. “Adapting to different surfaces is always a delicate balance,” Roemer said. She settled on a selection of sneakers, which extended the production’s casual style.”They all have bold colors — some even painted to remain within our tight color palette.”

Challenges aside, placing “COLORFORMS” outside a proscenium stage allows for museum spaces to be imagined anew. Bathed in the color, the galleries, the epic grandeur of the atrium, the inherent movement of the sculpture garden, and even the geometry of the windows become supporting cast members in a production that transports audiences to places inaccessible — at least for now.

And, though it’s impossible to digitally replicate the live element of performance — or the feeling of seeing art in person — the format comes with the possibility of reaching new audiences while hinting at the importance of both.

“I was excited about acknowledging, as a museum, that even digital content requires physical space,” Oropeza said. “If we’re doing everything we possibly can to stay safe and follow all the rules, we can get some cool moments of joy and share them out — not just to museum members, but to wherever this video eventually reaches.” 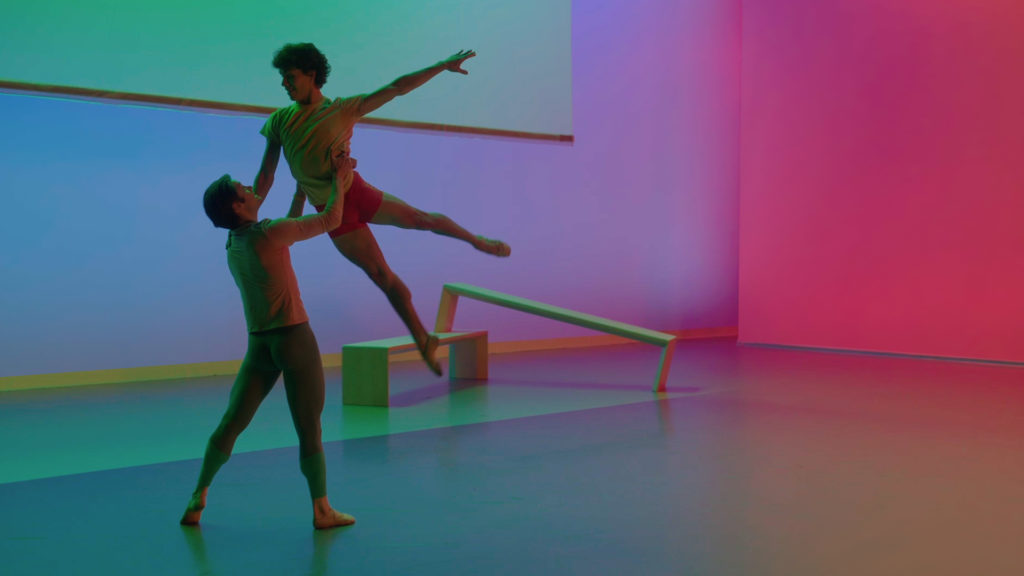 Britt Stigler is an arts, culture, and performance writer based in New York City. In addition to studying dance, she is the producer of ALL ARTS' Ballerina Book Club and a senior digital content editor at WNET for New York Public Media