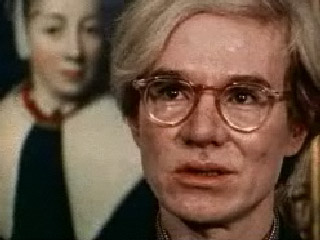 An iconic figure in twentieth-century art and culture, Andy Warhol was born Andrew Warhola, the son of working-class immigrants from Slovakia. He studied commercial art in Pittsburgh before moving to New York in 1949 and beginning a highly successful career as an advertising illustrator.

Warhol's inexpressive painting style was mirrored by his famously flat, monotone persona. An obsession with Hollywood glamour inspired a series of experimental films, often campy in tone and explicitly homoerotic. Warhol's Factory — a term for both his studio and the associated network of actors, musicians, druggies, and hangers-on — has become synonymous with 1960s bohemia. Although his work was initially controversial for its apparent non-art status, he quickly achieved both critical and commercial success.

In the 1970s and 1980s, Warhol's celebrity arguably eclipsed his art, although he produced several innovative bodies of work during this period. He died in 1987 from complications following a routine gallbladder surgery.