Spanning Time and Place in Joan Mitchell’s The Bridge

In a September 1956 photograph (fig. 2), Joan Mitchell sits in her Paris studio at 77 rue Daguerre below the vertical panels of her first known diptych, The Bridge (1956, fig. 1). Instead of the blooming masses of marks on surrounding unstretched canvases, the artist concentrated sparser clusters of streaking horizontal lines with dispersed diagonals to suggest a visual movement across the composition. Like Mitchell herself, who continually navigated between cities and continents, this work was painted in Paris but first exhibited in New York and encompasses a body of transatlantic travels and experiences.1 Named for a subject that recurred in her painting until 1960 and made in a multipanel format that the artist returned to in the 1960s, The Bridge spans space and time in its theme and structure, capturing the importance of mobility and memory in Mitchell’s abstraction.

Mitchell’s work thrived on her transatlantic movement as she distilled flowing impressions of lived experiences into the fixed medium of paint. “Travelling around is a way of finding things which actually find me,” she explained to critic Irving Sandler in 1957. “I paint what makes me want to get up in the morning.”2 Remembered views served as a point of departure that carried over in reaching brush marks and titles. That spring, she recalled from New York, “I went to Europe with that landscape feeling. . . . There were line drawings in the book [I was reading] of the Brooklyn Bridge. . . . I got homesick and nostalgic, and felt the image of the bridge come back and I painted [the] diptych. These images come and go.”3 Anchored in the artist’s mobility, The Bridge stemmed from a corpus of embodied perceptions of foreign and familiar landscapes.

Grounded in an evolving amalgam of memories, the bridge motif emerged in the tension between a straddling horizontal armature and a pronounced vertical rise. The Bridge embodied for Mitchell a “feeling of space and freedom . . . space—structure—color. [The] diptych will be used not only in terms of remembered images but remembered paintings.”4 She painted this diptych the same year that the Van Buren Street bascule bridge in Chicago designed by her grandfather was removed, the historic structure having remained in place during the construction of the new one. This striking fusion of past and present echoes the ways bridges could reference her native Chicago and her early New York apartment below the Brooklyn Bridge, or her first Paris studio on rue Galande, across the Pont au Double from Notre Dame Cathedral. As she described from Paris in 1948, “I walked the length of the Seine . . . looking at the low squat bridges, looking vainly for something like the Brooklyn Bridge. . . . The closest thing to the Bridge is Notre Dame.”5 This slippage between bridges and cathedrals resurfaced in a 1958 interview that juxtaposed The Bridge with a tourist-like snapshot of a twelfth-century basilica in Burgundy, France (fig. 3). As Mitchell said, “I don’t want to see a Romanesque cathedral every day. . . . It’s there like Rikers. I can’t close my eyes or limit my experiences.”6 This transatlantic description condenses forms and sensations from disparate monuments that each inflect the subject and matter of her paintings.

Mitchell’s fluid fusion of the arcing extension of bridges and the sweeping reach of cathedrals forms the underlying structure of The Bridge. On a textured white ground touched with grays, the bold central forms framed by thin, sketchy blue, red, and black lines capture a vivid architectural monumentality in both the spanning sense of movement across the panels and the rising trajectory of ascending marks. The architectonic composition and strong flat lines build on an early touchstone motif that Mitchell recalled decades later as a “bridge picture.”7 Taken from views, paintings, or poems, bridges first appeared as straddling constructions across vast swatches of color in early figurative works or in the undulating scaffolding of abstract marks driving diagonally upward in Cross Section of a Bridge (1951, fig. 4).8 In The Bridge, nested lines of thickly layered marks in different colors trace over past brushstrokes, subtly inscribing the temporal process of making. On the left, broad streaks of white and sky blue mask thin black and olive lines, while the central beam on the right is built up of intricately woven touches of red, ocher, yellow, green, blue, and black made with brushes, fingers, paint tubes, and controlled drips. 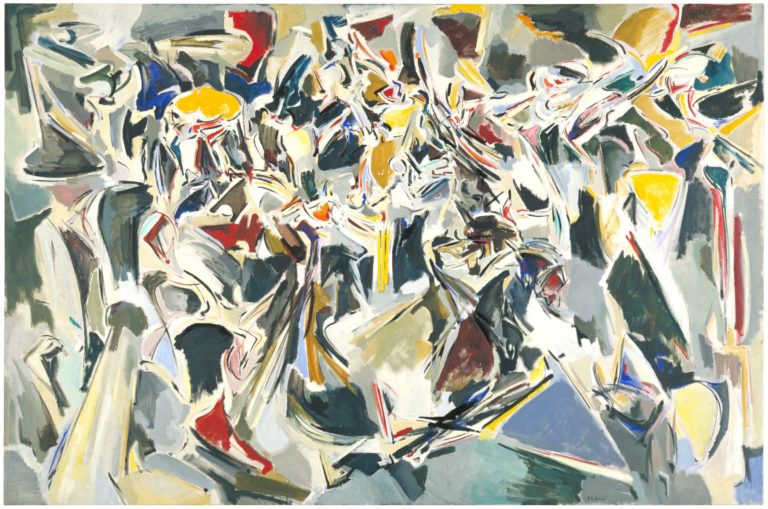 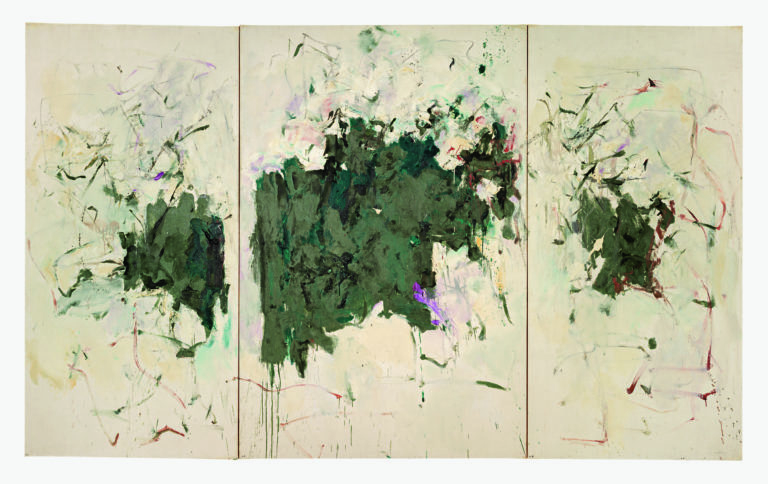 Itself rooted in memory, The Bridge remained in Mitchell’s mind when she flew back to New York and Chicago by December 1956. “I’m sitting in a DC6 missing you horribly,” she wrote Jean Paul Riopelle. “Outside there are all those clouds you love so and maybe someday we’ll be in a plane together. I started a large diptych before I left.”9 The rhythmic, mnemonic repetition of forms across the two panels of The Bridge reflects the artist’s movement and anticipates her 1960s polyptychs like Girolata Triptych (1963, fig. 5). These works transform the vertical format of each canvas into a horizontal sequence, creating a panoramic spatial and temporal succession. “Painting is a still thing,” Mitchell explained in 1957. “It doesn’t move in time like music or a novel, and the images of memory which are so important to me find their expression in my painting.”10 With its accumulated lines that disperse across the panels, this pivotal painting bridges her early and later work, fixing in paint a progression of transitory images that, like the artist herself, “come and go” across time, space, and place.