Rodney McMillian engages with the political and social ideologies that shape American culture and maintain racial and class inequality. His work addresses how these principles formed and offers new possibilities through critical reinterpretations of historical narratives, speeches, government policies, political figures, and popular culture, as well as by challenging traditional representations of the American landscape and the domestic realm. In This Land (2019, fig. 1), commissioned for his first solo museum presentation on the West Coast, brings these themes together in an immersive installation that questions the systems that promise freedom and equality for all and highlights the power of the individual to effect hope and create change.

Growing up in the South, McMillian was profoundly aware of the histories that scarred the land and upheld the ideological structures of racism. He has explained, “My family was pretty adamant about my knowing American history and the history of the South—slavery and civil rights and Jim Crow, and how those would impact me. They wanted to prepare me as best as they could for the great wide yonder. Those early lessons have stayed with me. I articulate those positions through my work.”1 The influence that the past continues to have on our bodies and psyches remains a driving concern for McMillian. By teasing apart aspects of a mythic America, he deconstructs dominant political narratives and presents alternative or overlooked realities. This approach extends to his focused engagement with the constructed landscape, a response to the nineteenth-century paintings and photographs that perpetuated the expansionist doctrine of manifest destiny. These images, made popular by the Hudson River School painters, depict uninhabited land and open spaces where people and nature coexist peacefully (see fig. 2). Romantic and theatrical, during their time they inspired awe and wonder, and as pointed allegories of power and dominance they contributed to the justification of the colonization of the American West. 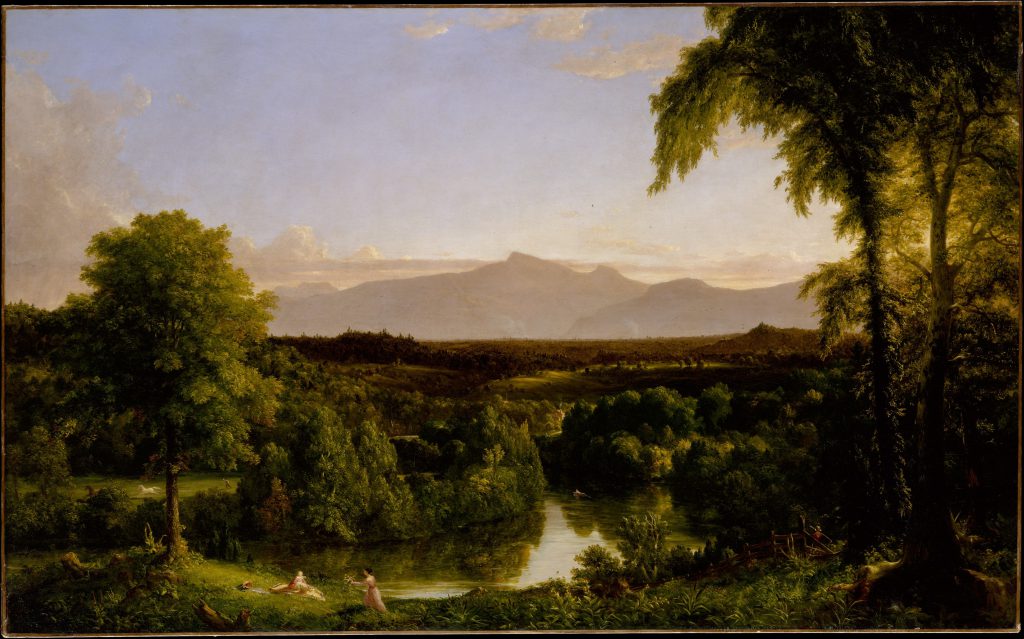 The landscape appears in different forms in McMillian’s work, most often through abstract marks and pours of paint. This exhibition features a new eighty-eight-foot-long painting made specifically for the San Francisco Museum of Modern Art’s New Work gallery. The floor-to-ceiling, abstract panorama spans three walls, redefining the architecture by transforming the rectangular space into an irregular curve. Meant to envelop the viewer in its intense materiality, the composition acknowledges the pull of gravity as it undulates with the weight of the canvas. In order to create the work, McMillian positioned it horizontally on the floor of his studio (see fig. 3), allowing him to move freely across it as he poured house paint, applied inks, and attached paper to various sections. As the paint dried, the combination of flat and glossy finishes caused it to crack and pool, evoking topographical peaks and valleys beneath a vast sky. The bright pinks, purples, yellows, greens, and oranges—a more vibrant palette than the artist has explored in recent years—reverberate off the dark cotton support. An electric blue burst punctuates the top of the central panel, creating a light source behind a form that functions as both a sun and a moon. These vivid colors, however, do not signify a clear and pleasant day; rather, they engulf the viewer in a visceral, emotional, psychologically charged vista. The scale was conceived in relation to the architecture in order to elicit a physical response. The black background, characteristic of McMillian’s early still lifes and his large landscapes, resonates with blackness as identity. It is not painted black: blackness is the starting point, an inherent aspect of the panorama. The layering of this dark ground with brilliant color calls for an acknowledgment of the many histories embedded within the American landscape, including the truths of its construction. It particularly enhances the impact of the blues, which conjure the powerful musical form developed in the Deep South around the time of the Emancipation Proclamation (1863). 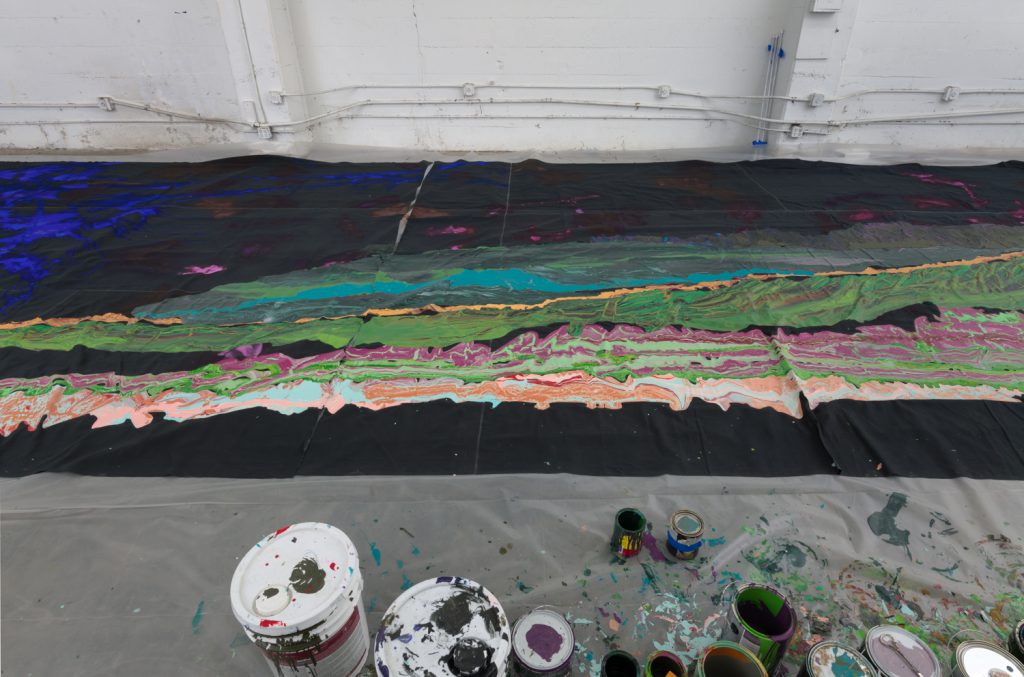 3. In This Land in progress on McMillian’s studio floor, 2018 (detail)

McMillian’s landscapes do not depict specific locations but consider the physical and political circumstances of our inherited vistas. This canvas incorporates his personal experiences driving cross-country in addition to memories of Northern and Southern California scenes. He also revisited works by artists such as Richard Diebenkorn (1922­–1993), who painted abstractions of nature from his studios in Sausalito, Berkeley, and Los Angeles.2 Perhaps more importantly, McMillian’s aesthetic makes reference to ideas of possession and dispossession, particularly with regard to land usage and rights in the urban environment. In recent years an increased number of people suffering from the condition of homelessness have overwhelmed American cities, and the individuals and encampments on the streets of Los Angeles and San Francisco had a significant impact on McMillian while he prepared for this exhibition. In order to learn more about the social policies and advocacies that focus on this issue, he spoke to key figures at various San Francisco–based organizations, including the Coalition on Homelessness, Tipping Point Community, Hamilton Families, the Luggage Store, GLIDE, and Skywatchers. These conversations informed his decision to expand his ongoing interest in the domestic realm to include broader concepts of home as a place and a state of mind. 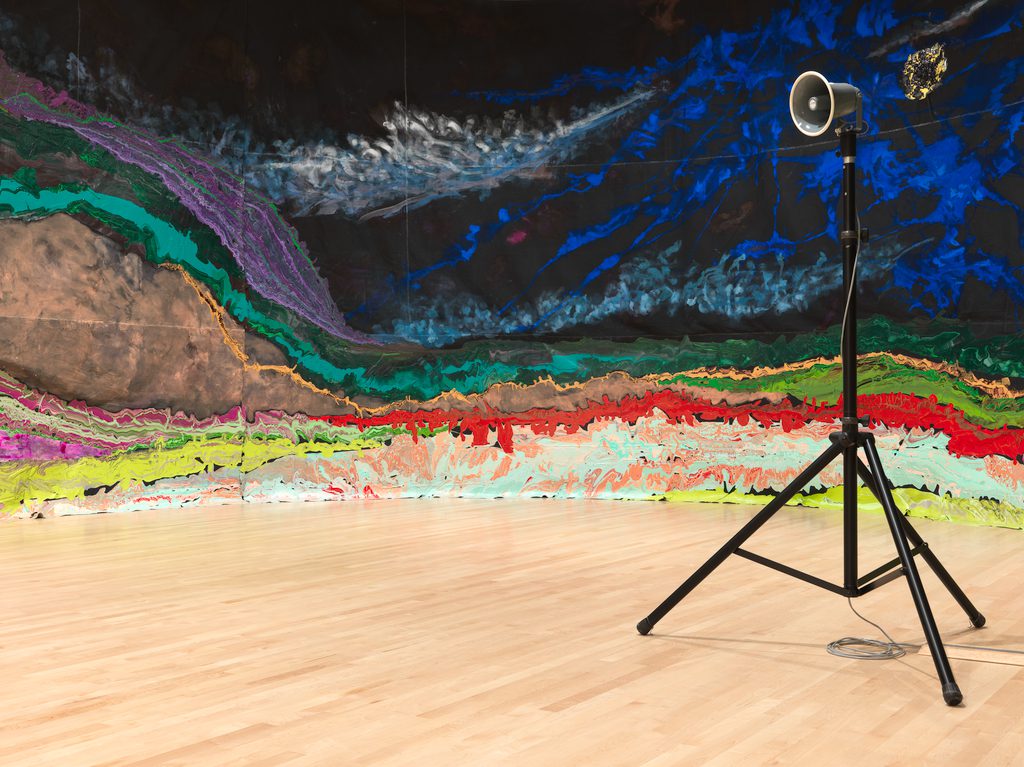 McMillian integrates these ideas into In This Land by activating and interrupting the immersive landscape with two PA speakers on tall stands (see fig. 4). He frequently incorporates sound into his installations, often recording himself reciting political speeches or creating renditions of pop songs.3 In this looped soundscape he performs two iconic 1980s singles: “Born in the U.S.A.,” by Bruce Springsteen, and “Home,” from The Wiz. After returning from his first site visit to San Francisco, McMillian heard the Springsteen hit on the radio, and it initiated the concept for this show. He has explained, “It’s incredibly heartbreaking as a memorial and yet inspiring as an anthem that is about love and place and working-class realities. The song made me think of the many Vietnam veterans who struggled with a condition of homelessness. I also thought about Reagan-era policies that cut funding for health care facilities that treated individuals with mental illness, many of whom were in the military or from military families. I remembered vividly how [the song] was misappropriated to support values that were not aligned with the sensibilities of the song and its originator.”4 The values McMillian refers to were those held by former president Ronald Reagan and fellow Republicans who identified with the anthem-like chorus and missed the biting criticism embedded in Springsteen’s lyrics. In McMillian’s version there is no sense of the spirited chorus. His interpretation is emotional and partly spoken, his voice attempting to encapsulate Springsteen’s downtrodden message.

The song “Home” is from the finale of The Wiz, an adaptation of The Wizard of Oz set in an African American context. Sung just as Dorothy is about to return to her family, “Home” is the culmination of her journey. The lyrics are full of longing to be back in the place “where there’s love overflowing” and “love and affection.” It was first performed by Stephanie Mills in the 1975 Broadway production, Diana Ross sang it in the 1978 film, and Mills recorded it for her album Home in 1989, when it reached number one on the Billboard Hot Black Singles chart (now the Hot R&B/Hip-Hop Songs chart). Sentimental and aspirational, the original versions present home as a universal place and feeling that everyone understands and has experienced. McMillian’s version strips away this nostalgic, melodramatic facade, assuming a tone that is direct and edges on cynicism. The intense fragility of his voice complicates the guiding principles behind the structure of home and the emotions and realities associated with it.

Interwoven with the songs are excerpts from an interview McMillian conducted with Tomiquia Moss, CEO of Hamilton Families, a San Francisco–based nonprofit that provides support for families suffering from the condition of homelessness. A leader in city politics, Moss has a clear vision and a strong message that proposes new language and policies around the issue. She conceives of homelessness as a solvable, temporary situation that happens to a person, not something that is part of his or her identity, and she addresses long-term policy measures and larger societal structures that have prevented African Americans, in particular, from purchasing and maintaining homes. She also notes that families, many of whom maintain regular jobs and attendance at school, are often not visible on the streets, though they are extremely vulnerable to income insecurity due to the high cost of living—especially in the Bay Area. These systemic failures, she stresses, affect all of us. Moss’s determination to find permanent housing for families with children points to the importance of having structures, spaces that people can call their own, in order to build confidence and change mindsets. She emphasizes a sense of identification with those who are struggling, as well as the role of speech in shaping perception and the capacity of language to both restrict and liberate. McMillian physically embodies her message by playing it through prominent speakers meant for outdoor public address and broadcasting, their physical presence rendering the recorded voices visible.

McMillian understands the importance of reclaiming and transforming culturally derived notions of race and class, and that perception and visibility are key components to upholding, and therefore understanding and breaking down, ideological structures. In This Land is meant to feel like the beginning of a speech, a policy, or a deed. It alludes to the promise that America holds, incorporating notions of equality, justice, and a place to call home. Taken as a whole, the installation articulates a political stance that empowers both the individual and the collective to create a space where all are visible.

Rodney McMillian was born in 1969 in Columbia, South Carolina, and currently lives and works in Los Angeles. He holds an MFA from California Institute of the Arts, Valencia; a post-baccalaureate from the School of the Art Institute of Chicago; and a BA in Foreign Affairs from the University of Virginia, Charlottesville. McMillian has had solo exhibitions at the Contemporary Austin; the Art Institute of Chicago; the Institute of Contemporary Art, University of Pennsylvania, Philadelphia; the Studio Museum in Harlem, New York; the Aspen Art Museum; MoMA PS1, Long Island City, New York; the Institute of Contemporary Art, Boston; the Kitchen, New York; and NAK Neuer Aachener Kunstverein, Aachen, Germany, among others. His work has been featured in many group exhibitions, including Sharjah Biennial 12: The Past, the Present, the Possible, United Arab Emirates; When the Stars Begin to Fall: Imagination and the American South, the Studio Museum in Harlem; Blues for Smoke, the Museum of Contemporary Art, Los Angeles; and the Whitney Biennial 2008, Whitney Museum of American Art, New York. He has also received numerous awards, including the inaugural Suzanne Deal Booth Art Prize.

Works in the Exhibition

New Work: Rodney McMillian
This immersive installation questions the political systems that promise freedom and equality for all, and highlights the power of the individual to affect hope and create change. 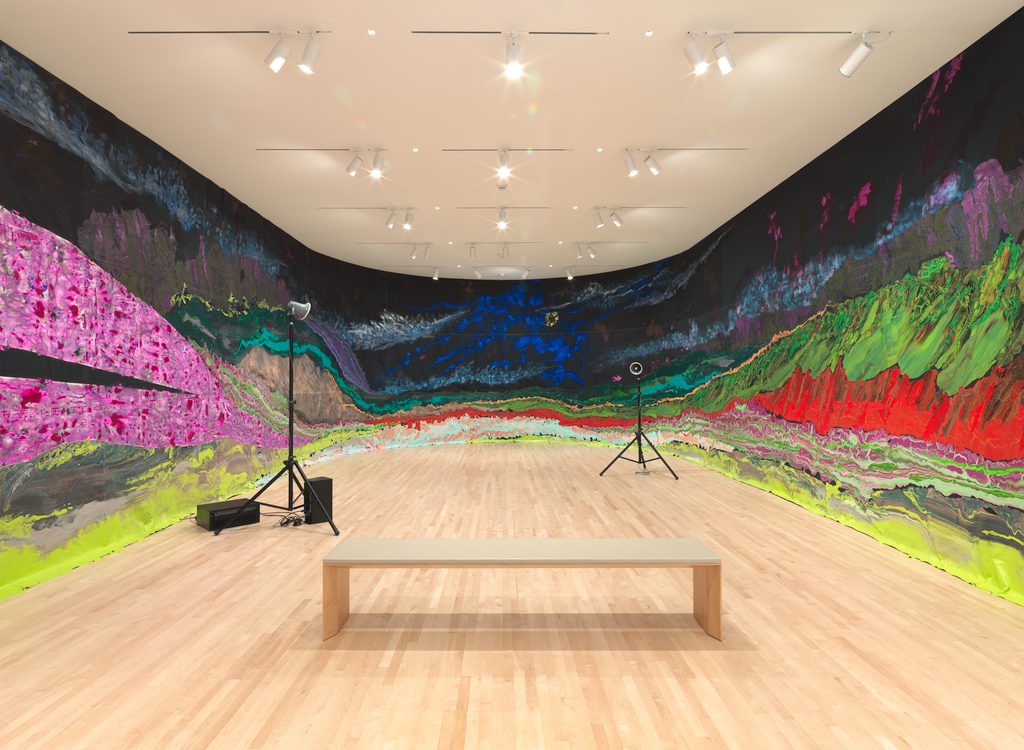 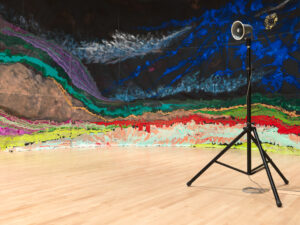 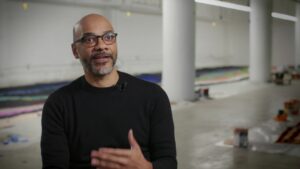