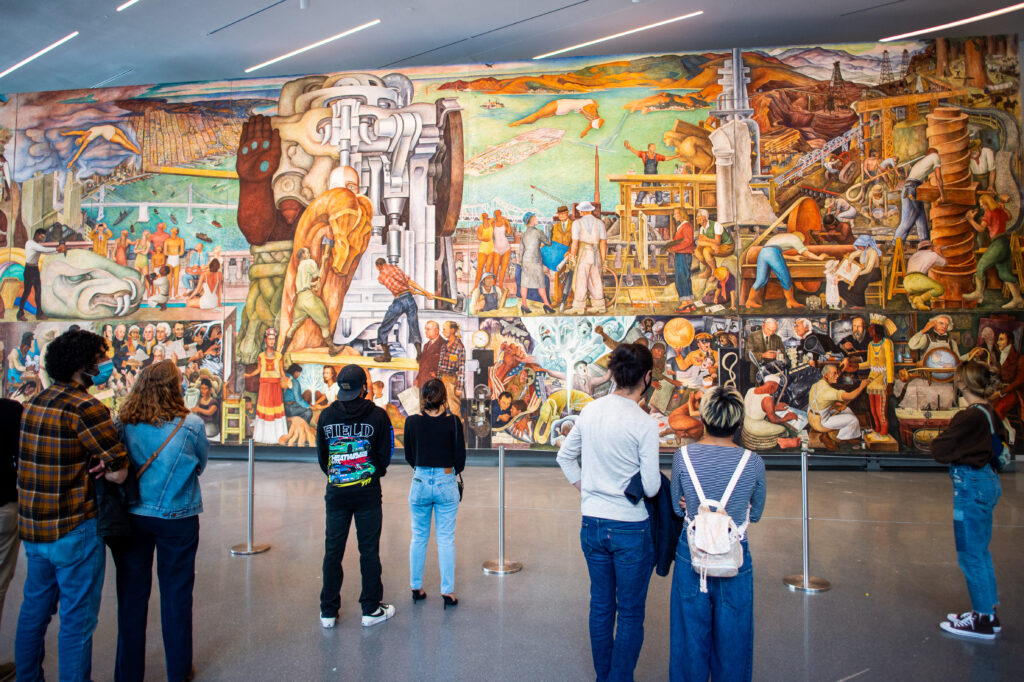 Art and Labor: Songs and Poetry in Response to Diego Rivera's America

To celebrate Labor Day this year, join us for a special evening of singing and poetry performed in front of Diego Rivera’s Pan American Unity mural. Throughout the event, performances by The Labor Heritage/Rockin’ Solidarity Chorus and Bay Area poets Josiah Luis Alderete, Leticia Del Toro, Ananda Esteva, and Tehmina Khan will fill the Roberts Family Gallery with song and spoken word.

This special evening also commences the new series of public programs, Art and Labor, on the occasion of the exhibition Diego Rivera’s America to explore issues of organized labor, racial justice, and migration as they intersect with culture today. Labor has been a consistent theme throughout Diego Rivera’s work from his depictions of fruit and flower vendors on canvas to his tributes to auto workers in his Detroit Industry Murals. In Pan American Unity, art making as a form of labor takes center stage with the depiction of artist Dudley Carter carving of a wooden ram. The scene is an homage to the 1940 Art in Action exhibition, where Rivera and 75 other artists created work in front of a live audience.

This evening’s lineup of local musicians and poets was organized in partnership with James Tracy, chair of the Labor and Community Studies department at City College of San Francisco (CCSF). This event takes place on First Thursday, when museum admission is free for Bay Area residents.

The Labor Heritage/Rockin’ Solidarity Chorus is based in the San Francisco Bay Area and is made up of workers from many unions, as well as students and independent folks who love to sing. They are dedicated to building more democracy and representation within their unions and come together to celebrate their love of music and workers’ culture. The Chorus is directed by musician and labor organizer Pat Wynne. Under her leadership, they borrow from many musical traditions such as South African and Gospel; traditional and newly composed labor songs; songs in Yiddish, Latin, Spanish and Xshosha; and parodies of popular songs created in the Joe Hill tradition. Pat Wynne’s musical mission is to create a new canon of labor music that better reflects the diversity of our working population. Their accompanist and Pat Wynne’s musical collaborator is Bernard Gilbert.

Tehmina Khan’s poem “The Heartbeat of City College” was published in CCSF’s Forum Magazine in Fall 2019. Since then, students, faculty members, and members of our community have added to the poem, and it’s become the anthem of the ongoing struggle to keep the college a thriving resource for San Francisco’s frontline communities.

Josiah Luis Alderete is a full-blooded Pocho, Spanglish speaking poet who has been an active part of el Área de la Bahía’s spoken word scene for over 20 years. He was a founding member of outspoken word group The Molotov Mouths and is the curator and host of the long-running monthly Chicano/Latinx reading series Speaking Axolotl. Josiah’s book of poems, Baby Axolotls y Old Pochos, was released in 2021 Black Freighter Press.

Ananda Esteva was born in Chile and raised in the San Francisco Bay Area. A student of the late June Jordan, she co-authored the book June Jordan’s Poetry for the People: A Revolutionary Blueprint, dedicated to the teaching of poetry and formation of writing communities. She is the author of the poetry collection, Pisco Sours, and a contributor to anthologies on Seal Press and Manic D Press. Her novel, The Wanderings of Chela Coatlicue Alvarez, is an adult choose-your-own-adventure-style exploration of migration, music, globalization, and identity.

Leticia Del Toro is a Xicana poet and fiction writer from the refinery town of Crockett, California with roots in Jalisco, Mexico. Her work has been published in Huizache, Zyzzyva, Mutha Magazine, About Place Journal, and others. Leticia’s awards and honors include a Hedgebrook Residency for Women Authoring Change, Bread Loaf, and the Kore Press Fiction Prize for her story, Café Colima. She is a veterana of VONA and also a Macondista. She earned a B.A. in Spanish Language and Literature from UC Berkeley and an M.A. in English from UC Davis. Leticia has most recently been awarded a Storyknife fellowship in Alaska. Her book of poetry, All We Are Told Not to Touch, is forthcoming from Finishing Line Press.

James Tracy is a Bay Area-based author and organizer. He brings 30 years of experience in the politics of housing, economic justice, and social movements to the classroom. Tracy is the co-author of Hillbilly Nationalists, Urban Race Rebels and Black Power: Interracial Solidarity in 1960s-70s New Left Organizing and No Fascist USA! The John Brown Anti-Klan Committee and Lessons for Today’s Movements. He is the author of Dispatches Against Displacement: Field Notes From San Francisco’s Housing Wars. His articles have appeared in Shelterforce, Race Poverty and the Environment, Italian-American Review, Contemporary Justice Review, and Punk Planet. He is the Chair of Labor and Community Studies Department at City College of San Francisco. Education: M.A. in Work and Labor Policy, Empire State College, State University of New York (2020).

Major support for First Thursdays is provided by the Hearst Foundations, illy and United Airlines.

Generous support is provided by Nancy and Alan Schatzberg and Kay Harrigan Woods.