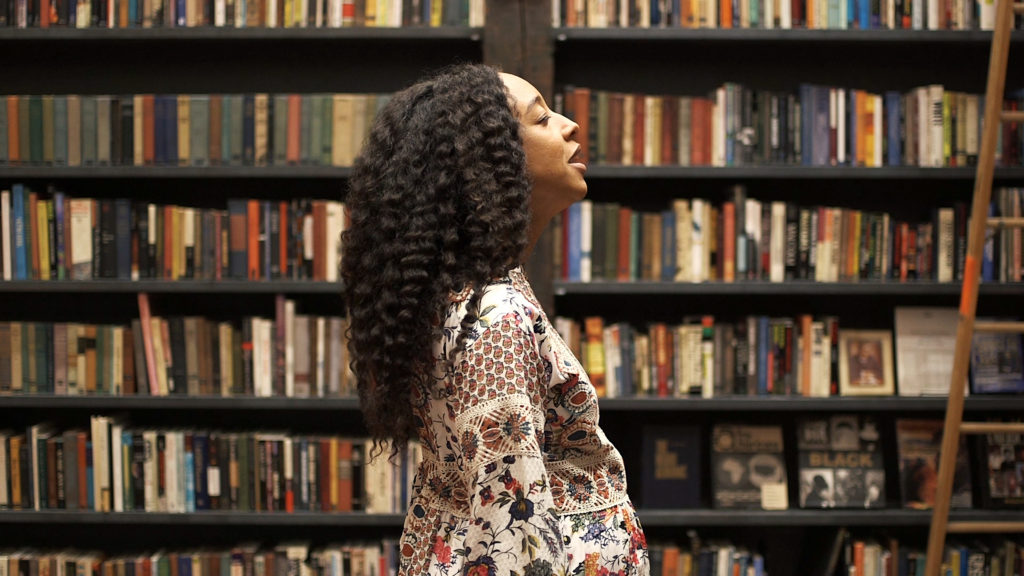 Live captioning will be provided for this event.

Join us for an online conversation between artist Theaster Gates and Grammy Award‒winning musician Corinne Bailey Rae. The U.K.-based singer appears as a key performer in Do you hear me calling? Mama Mamama or What Is Black Power? one of the featured works in the exhibition Future Histories: Theaster Gates and Cauleen Smith (Floor 7 through May 23). Gates will screen an excerpt from this piece during the program.

Through artworks, exhibitions, and ongoing initiatives, Gates has honored the Johnson Publishing Company (JPC, 1942–2019) and its pioneering role in defining and promoting Black culture and achievement with its aspirational lifestyle magazines Ebony and Jet, among other editorial initiatives. Gates’s Do you hear me calling? Mama Mamama or What Is Black Power? (2018) pays homage to motherhood and the power of women by exploring the idea of the Black Madonna through reworking three decades of images drawn from the JPC archives. Making its U.S. debut at SFMOMA, this two-channel video installation interweaves scenes of performances by choirs, musicians, and singers, including Bailey Rae and the artist’s ensemble The Black Monks.

Theaster Gates creates work that focuses on space theory and land development, sculpture, and performance. Drawing on his interest and training in urban planning and preservation, Gates redeems spaces that have been left behind. Known for his recirculation of art-world capital, Gates focuses on the possibility of the “life within things.” In all aspects of his work, he contends with the notion of Black space as a formal exercise — one defined by collective desire, artistic agency, and the tactics of a pragmatist. Gates has exhibited and performed at Palais de Tokyo, Sprengel Museum Hannover, Kunstmuseum Basel, and the National Gallery of Art, among other venues. Gates lives and works in Chicago. He is a professor at the University of Chicago in the Department of Visual Arts and the Harris School of Public Policy, and is Distinguished Visiting Artist and Director of Artist Initiatives at the Lunder Institute for American Art at Colby College. In 2010, Gates created the Rebuild Foundation, a nonprofit platform for art, cultural development, and neighborhood transformation that supports artists and strengthens communities through free arts programming and innovative cultural amenities on Chicago’s South Side.

Corinne Bailey Rae is a Grammy Award‒winning British singer, musician, songwriter, and producer. She studied classical violin and ballet as a child and led several orchestras before transitioning to indie electric guitar. Working in a jazz club at university, she developed a love for the freedom of the genre and — combined with her indie background (fronting cult band Helen) — she went on to make her eponymous solo debut in 2006 which garnered international acclaim. She then worked with legendary jazz musician Herbie Hancock on his Grammy-winning River: The Joni Letters (2007). Her Mercury Prize‒nominated second album The Sea (2010), with its “elegiac beauty,” drew on experiences of the loss of her first husband. She won a Grammy in 2012 for Best R&B Performance of “Is This Love” from The Love E.P., and in 2016, a track from her “genre-defying” third album The Hearts Speaks In Whispers landed on President Obama’s Summer Playlist. Bailey Rae’s success has led her to compose music for film and television, including for Tracee Ellis Ross’s lead character in The High Note (2020). Most recently, Bailey Rae performed a duet of Sam Cooke’s “A Change Is Gonna Come” with Leslie Odom Jr. at the 2021 BAFTA Awards.

Support for Public Programs and Artist Talks at SFMOMA is provided by the Phyllis C. Wattis Distinguished Lecture Series.