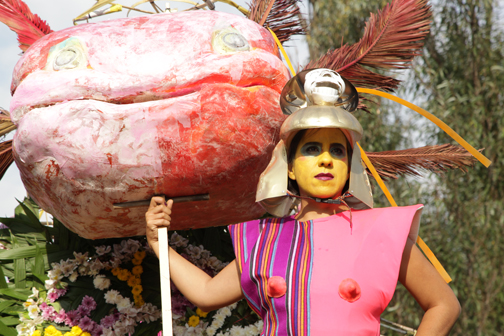 Performance in Progress presents the debut of The Formaldehyde Trip, a live concert and video work by Mexico City-based artist Naomi Rincón Gallardo. The Formaldehyde Trip weaves together Mesoamerican cosmologies, feminist activism and theory, and indigenous women’s struggles for their territories. This new commission imagines the murdered Mixtec activist Alberta “Bety” Cariño in her journey through the underworld where she encounters warriors, witches, and the dual-gendered goddess of death. Rincón Gallardo’s The Formaldehyde Trip is co-curated with Galería de la Raza.

Naomi Rincón Gallardo’s The Formaldehyde Trip transforms recent history into mythic journey. This live cinema concert imagines the Oaxaca-based, Mixtec activist Alberta “Bety” Cariño — who was killed in a paramilitary ambush in April 2010 — in her passage through the underworld. Planted rather than buried, the traveling Cariño encounters warriors, witches, and the Mesoamerican god/goddess of death as she becomes the seed for a new feminist life. The Formaldehyde Trip also unfolds as the dream of an axolotl, a salamander-like native to Mexico City that, in its home environment, resists metamorphosis and does not grow from an aquatic to a land-dweller. Filmed in the canals of Xochimilco (Mexico City), Oaxaca, Berlin, Vienna, and at Galería de la Raza (San Francisco), the axolotl, like Cariño herself, eludes Western classifications as it calls to indigenous knowledge, possibilities, and locales. The road to Utopia winds through revolt.

Naomi Rincón Gallardo’s The Formaldehyde Trip was commissioned by SFMOMA as a part of Performance in Progress, and was co-curated by SFMOMA and Galería de la Raza.

With an interest in radical histories and speculative fictions, Mexico City-based artist Naomi Rincón Gallardo works across performance and video to investigate utopian possibilities and belief. Her often music-based narratives draw on counter-cultural forms like punk, DIY aesthetics, and queer identities to reframe touchstones in Mexican and Mesoamerican politics. As both an artist and an educator, she foregrounds research tools from feminist theory and radical theater to imagine new types of social engagement, encounter, and play. In 2016, SFMOMA commissioned Rincón Gallardo to create a new work titled <em>The Formaldehyde Trip</em>, which weaves together Mesoamerican cosmologies, feminist activism and theory, and indigenous women’s struggles for their territories.

Federico Schmucler completed music studies at the Escuela Nacional de Música at the National Autonomus University in Mexico City and has earned additionals degree in folk and tango music. Schmucler also studied cinematography at Centro de Capacitación Cinematográfica (C.C.C.) in Mexico City. He currently works as a film and video composer for visual artists and filmmakers and as a sound designer for feature and documentary films. His collaboration with Naomi Rincón Gallardo includes the music mixing of Utopias Pirata, and the music production and composition for both Odisea Ocotepec and her latest video cycle, The Formaldehyde Trip.

David Molina is an award-winning composer, multi-instrumentalist, sound artist/ designer, recording engineer, and instrument inventor who has worked on performing arts, film, radio, and multimedia productions for twenty years.. Molina’s instruments have been displayed in Bay Area galleries, museums, and festivals. He has performed throughout North and South America, and his recordings have been presented in Europe and Japan. Molina’s bands Impurita, Ghosts and Strings, and Transient can be found on Dorog Records, Resting Bell, Black Note Music, and Distant Spore labels, or self-released. For more information, visit drmsound.com.

Amy Martinez is one of the organizers of San Francisco’s soul music-themed queer party Hard French, and spins vinyl under the stage name Brown Amy. Martinez is the drummer and one of the founding members of Queen Crescent, an Oakland-based psych/prog rock band, comprised of women of color, some of whom are queer. This four-piece takes inspiration from subcultures in countries including Cambodia, Indonesia, Nigeria, and Mexico, where rock and roll has historically been used as a form of resistance

San Cha is a singer-songwriter known for explosive, visceral, and emotional live performances. Her name is derived from the Spanish word sancha which translates to ‘mistress,’ and is also a reference to the title of ‘San’ given to male saints in the catholic tradition. San Cha has spent years playing in the established and underground venues of San Francisco and Oakland. In 2015, San Cha moved to Los Angeles, and formed a group called San Cha y Las Sirenas who perform original songs which show influences of Cumbia, Ranchera music, and church gospels.

David Katz is a singer, improviser, mover, and composer. Described by Israeli newspaper Haaretz as “an uber-performer,” Katz has been playing solo and ensemble improvisations under the foreignfire epithet since 2009. Katz grew up in Tel-Aviv, where he fronted legendary underground band The Fluorescents, sang in choral groups, and studied composition with Arie Shapira. Based in San Francisco since 2000, Katz earned his graduate degrees in composition and improvisation from Mills College, where he studied with Zeena Parkins, Roscoe Mitchell, and Fred Frith. Katz’s recent solo appearances include English Renaissance in Tel-Aviv, a program of lute songs in collaboration with harpsichordist Arin Maisky, and Brett Carson’s song cycle Mysterious Descent.

Danishta Rivero is a musician, sound artist, and vocalist based in San Francisco. She also performs on the hydrophonium, a water-based electro-acoustic percussion instrument she created. She co-founded Optiphonal Wonder Machine, a multimedia collaboration, with Jennifer Rannells. Rivero is also one half of Las Sucias, a musical project that mixes anti-patriarchal riotgrrrl lyrics, Afro-Caribbean rhythms, brujería noise, and possessed vocals into performance rituals.

Berlin, DE and Vienna, AT

Sophia Wang creates and performs movement-based works in collaboration with performance artists, writers, and visual and sound artists. She earned a PhD in English from U.C. Berkeley, and integrates her research and performance practices through writing and curatorial projects focused on critical somatics: thinking with and as bodies.

Animators for “Accumulation by Dispossession”