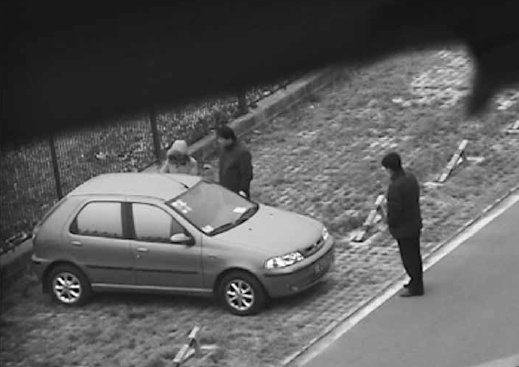 Civil rights activist Hu Jia was held under house arrest from 2004 to 2008 in the upscale eastern suburbs of Beijing. One day Hu picked up a video camera and began to document things outside the window: his watchers, shepherds tending their flocks, spiders in the rain, and his fellow activist and wife, Zeng Jinyan, going to and from work under the unnervingly close watch of plainclothes police.

This film is the prisoner’s freedom. My original goal in picking up the camera was to document the everyday rights violations being perpetrated by the police surveying us in such close proximity. Gradually, however, the camera became an outlet for my pent-up solitude. Watchers and prisoners alike have been confined to the same narrow space, both trapped in an autocratic system, waiting day in and day out for their own Godot.
–Hu Jia and Zeng Jinyan, directors

Prisoners in Freedom City documents Hu Jia and Zeng Jinyan’s repression in the name of social stability and their own acts of resistance. Hu and Zeng film their real lives, presenting the conflict between their ideals and reality with great impact. They are at once the documentarians and the subjects of a faithful record of their everyday lives.
–Ai Weiwei