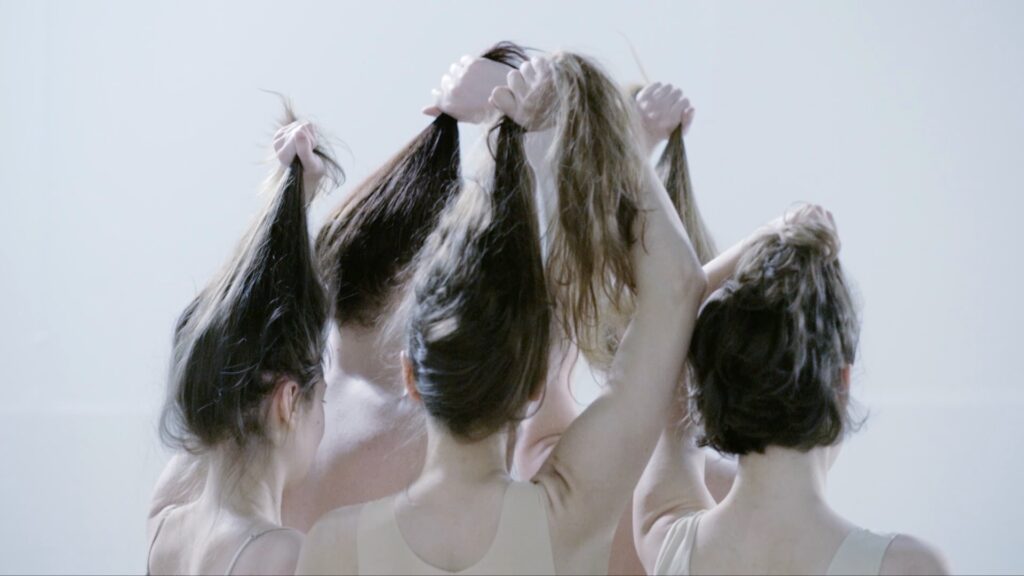 “There are so many stories and none of them are true. Lucy Kerr’s video/performance hybrid while you were away grounds a program of ascending bodies and bodies in collapse, mirrored, uplifted, and adrift in the universe. Images of absence expose distance between actual and virtual selves. Tenderness. Suspension. Turn the pages of a book. Are these the rules of the game?”

“…imagines a landscape where the past and the present have been expunged, reduced to shadows.” (Shona Masarin)

“Close-up footage of eyes emerges and dissolves in ocean waves […] a poetic dialog between the audience and the mysterious gaze.” (Nan Wang)

“A performance choreographed for camera; a political work showing an exhausted society accumulating energy, sprouting through the hardened surface of the earth.” (Elena Artemenko)

“…a reflection on the relationship between insect, human, environment, and the universe.” (Cherlyn Hsing-Hsin Liu)

“…a live performance uncannily merging live performance with video projection, speaking to the distance and confluence between the body and the projected, remembered, and imagined virtual self.” (Lucy Kerr)

“Set in Monet’s famed garden, Giverny I challenges the overwhelmingly white, masculine nature of Western art-historical narratives, bringing to the foreground the powerful cultural contributions made by people of color.” (Ja’Tovia Gary)

“Scenes from a coast where the Roman fleet is thought to have first landed in Britain. Adapted from writings by Virginia Woolf and Raul Ruiz, in a language thought closest in sound to spoken Latin.” (Julia Dogra-Brazell)

“A short film loosely based on the on the 1921 sound film experiments of Prof. Joseph Tykociner and the Voyager spacecraft golden record sent to outer space in 1977.” (Esther Urlus)