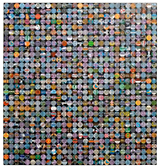 On November 10, the SFMOMA Artists Gallery at Fort Mason Center will open a multimedia exhibition of new works by Robert Larson, Terry Thompson, and Paula Moran.

The lure and aftermath of American consumerism and consumption reverberate as themes in this exhibition of new works by Robert Larson, Terry Thompson, and Paula Moran. The artists grew up during the rising bonanza of late 20th-century television programming, mass marketing, and media campaigns, an experience that informs their work and artistic explorations.

Larson’s collages reflect his experience in numerous urban landscapes, where he gathers discarded debris such as Marlboro cigarette packaging, matchbooks, and scratch-off lottery tickets and then methodically arranges them into formal patterns and grids onto two dimensional surfaces. In Red Honey, for example, Larson created a complex honeycomb arrangement using variously aged and weathered pieces of red Marlboro boxes.

Realist painter Terry Thompson refers to his series in this exhibition as “Snack Paintings.” Recreating well-known American brands of candies, snacks, and processed foods, Thompson paints segments of each and places them into neatly fitted grids and arrangements allowing them to spill off the edges of the canvas. He retains many of the packaging’s attention-getting colors and fonts, which demand the consumer’s attention.

Ceramist Paula Moran poses questions of deception versus reality in her trompe l’oeil clay sculptures. Here Moran presents common objects like bottles, pull-top cans, books, and leather suitcases and instills them with subtle twists and messages, urging the viewer to concentrate on the contents as much as the package.