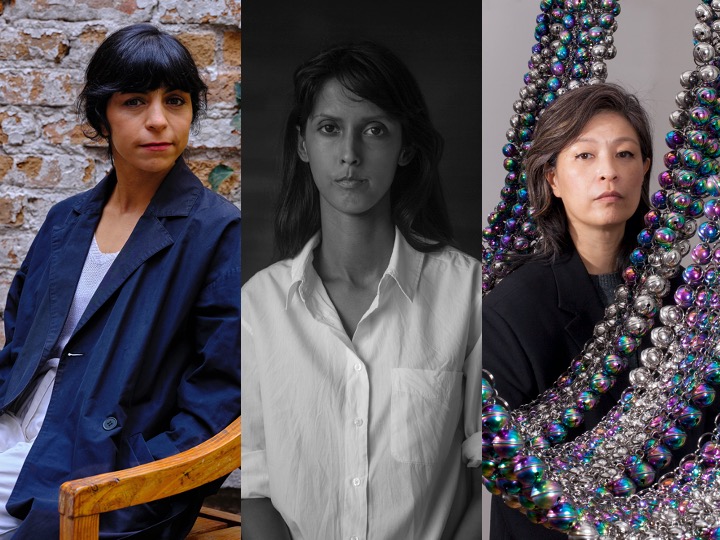 Free with RSVP; RSVP encouraged as capacity is limited.

Please note: the museum will be closed at the conclusion of this event. We encourage you to visit the exhibition Shifting the Silence on Floor 7 prior to the talk. This program is part of First Thursdays and museum admission is free for all Bay Area residents from 4–8 p.m.

Attendees will be required to wear masks during this program.

Shifting the Silence explores new narratives of contemporary art history by collapsing the limits of generation, artistic influence, and geography into an opportunity for a conversation between intuitions in which the radical language of abstraction sets the pitch and volume. Works by thirty-two artists explore experimentation, impermanence, and subjectivity — bold yet poetic characteristics that mark the art of our time. For this in-person talk, artists Tania Pérez Córdova, Ayesha Sultana, and Haegue Yang join curators Jovanna Venegas and Eungie Joo to discuss the artists’ work, influences, and perspectives on the ideas considered in this exhibition.

In her practice, Tania Pérez Córdova (b. 1979, Mexico) focuses on the relationship between the materiality of objects and the inherent narrativity of their production processes. Her sculptures become ciphers for abstract situations, while remaining faithful to their formal and conceptual coordinates. Pérez Córdova runs Juan de la Cosa / John of the Thing, a publishing project based in Mexico City, with writer and artist Francesco Pedraglio.

Ayesha Sultana (b. 1984, Bangladesh) received a bachelor of fine arts and a post-graduate diploma in art education from Beaconhouse National University in Lahore, where she also taught for two years. Recent solo and group exhibitions include Bare Bones at Experimenter, Kolkata, Do You Know How To Start A Fire at On Site, New Delhi, and Line, Beats and Shadows at Kiran Nadar Museum of Art, New Delhi. In addition to SFMOMA, Sultana’s works are in the collections of the Kiran Nadar Museum of Art, New Delhi; Devi Art Foundation, New Delhi; X Museum, Beijing; Samdani Art Foundation, Dhaka; and Tate Modern, London, among others.

The work of Haegue Yang (b. 1971, South Korea) is known for its eloquent and seductive sculptural language of visual abstraction, often inspired by her research on historical figures and events. Her current exhibition, Double Soul at SMK—The National Gallery of Denmark, refers to Yang’s preoccupation with doubling and pairing seemingly disparate dualities. Her recent solo exhibitions were held at Tate St Ives; MCAD, Manila; AGO, Toronto; MMCA, Seoul; The Bass, Miami; MoMA, New York; and South London Gallery.

Eungie Joo is curator and head of contemporary art at the San Francisco Museum of Modern Art. Previously, she has served as curator of Sharjah Biennial 12: The past, the present, the possible (2015); curator of the 2012 New Museum Generational Triennial: The Ungovernables; director and curator of education and public programs at the New Museum (2007–2012); director and curator of the gallery at REDCAT, Los Angeles (2003–2007); and commissioner of the Korean Pavilion at the 53rd Venice Biennale (2009), where she presented Condensation: Haegue Yang.

Jovanna Venegas is assistant curator of contemporary art at SFMOMA. She has worked on public programs and exhibitions at e-flux, the Colección Patricia Phelps de Cisneros, the 11th Gwangju Biennial and was a curatorial advisor to the Whitney Biennial 2022. At SFMOMA, she curated Bay Area Walls: Liz Hernández and co-curated New Work: Wu Tsang Presents Moved by the Motion and Shifting the Silence. She will co-curate the SECA Art Award, opening in December 2022.

Presenting support for Shifting the Silence is provided by The Norah and Norman Stone Fund for Exhibitions of Contemporary Art.

Major support is provided by Randi and Bob Fisher, and Diana Nelson and John Atwater.

Generous support is provided by Jim Breyer and Angela Chao, the Bernard and Barbro Osher Exhibition Fund, and Pat Wilson.

Major support for First Thursdays is provided by the Hearst Foundations and The North Face.

Additional support is provided by the Kelson Foundation.