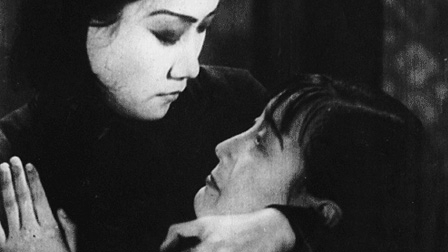 “Arguably the finest example of Shanghai’s Golden Age, Street Angel is an intoxicating blend of Chinese leftist populism, Hollywood pizzazz, song numbers, French poetic-realist doom, comedic slapstick, and city symphony, all set against one of the world’s greatest, most cosmopolitan backdrops, Shanghai. Amid prostitutes, criminals, and the poor, a good-hearted musician tries to rescue two young sisters from poverty and prostitution, and falls in love with one. Meanwhile, a teahouse service blossoms into song, a street march giddily turns cacophonous, a prostitute lures a client on shadowy street corners, and renters, landowners, and rent collectors go about their day: everywhere, Shanghai life bursts forth from the screen. ‘A film about the lowest strata of society in Shanghai,’ as star Zhao Dan recalled, and made by a left-wing collaborative, Street Angel borrowed from acceptable Hollywood film elements in order to circumvent censorship. Many assume the film is a remake of Frank Borzage’s Street Angel, but only the title itself was used; what also remains, though, is Borzage’s (and other silent-era directors’) sense of artifice, with stark, high-contrast lighting, soaring crane shots, and other techniques used to turn the streets (and street angels) of Shanghai into pure, brilliant cinema.’ (Jason Sanders, Fandor)”