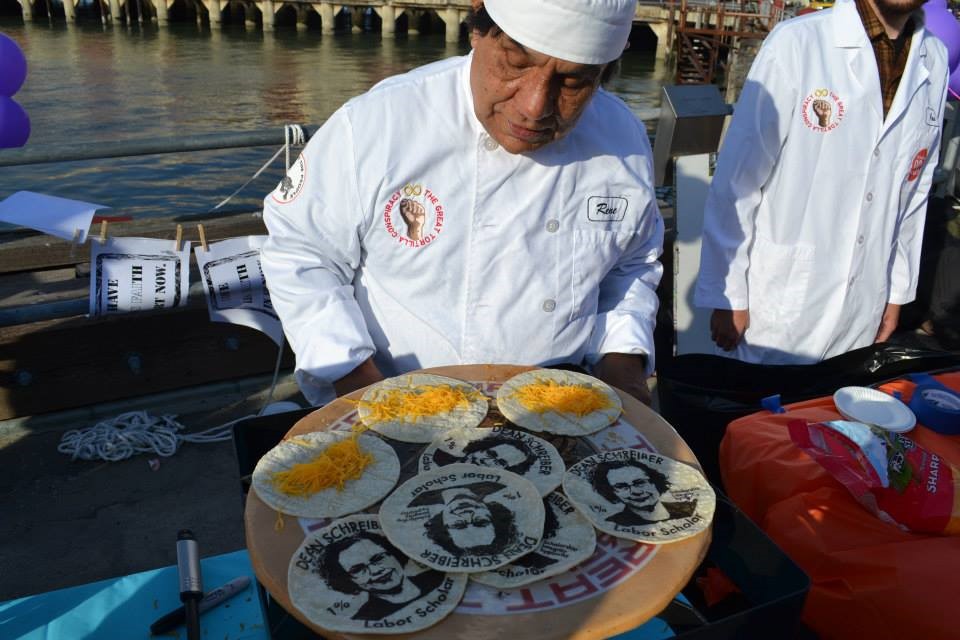 To complement both Diego Rivera’s America and Emmy Lou Packard: Artist of Conscience at Richmond Art Center, this four-hour event brings the unorthodox materials and mischievous humor of The Great Tortilla Conspiracy (GTC) to the museum. In an interactive performance reminiscent of Diego Rivera’s own demonstration at the 1940 Golden Gate International Exposition, GTC artists Jos Sances, Art Hazelwood, and Río Yañez will screen print graphics inspired by Rivera and Packard (Rivera’s principal assistant on Pan American Unity) onto tortillas with edible ink. After cooking them on a traditional comal, the collective will serve them up—with a side of playful conversation—to museum visitors.

Una Tarde con The Great Tortilla Conspiracy is presented in partnership with The Richmond Art Center.

About The Great Tortilla Conspiracy

The Great Tortilla Conspiracy (GTC) was founded in the late 1970s by Chicano activist and artist, René Yañez, and José Montoya as a satirical response to the phenomenon of sacred images of the Virgin Mary or Jesus appearing in domestic settings such as on a pancake, a refrigerator, the bottom of an iron, or as a sealant stain on a garage floor. At first, images on tortillas were burned with a hot coat hanger; later they were simply stenciled with non-edible substances. Eventually, Jos Sances, a screen printer, proposed creating detailed drawings for tortillas printing them using edible ink, so they could be shared as food or preserved as art. Many artists have joined the conspiracy over the years as the GTC gained notoriety with street performances that support protests and community events as well as galleries, museums, and progressive fundraisers.

Founding member Jos Sances has made his living as a printmaker and muralist in the San Francisco Bay Area. While founding Alliance Graphics and co-founding Mission Gráfica at San Francisco’s Mission Cultural Center, he maintained a steady output of politically engaged art. The Library of Congress has acquired 495 serigraphs representing an overview of his decades of printmaking. Sances’ work has been exhibited in venues nationally including New York’s Museum of Modern Art and the Smithsonian American Art Museum.

Founding member Rio Yañez is a curator, photographer, and graphic artist. As a curator he was a frequent collaborator with his father, Rene Yañez (1942-2018), and the pair developed exhibits together beginning in 2005. Rio has exhibited in cities ranging from San Francisco to Tokyo. His reimagining’s of Frida Kahlo have included the Ghetto Frida Project, a series of prints, writings, and performance pieces. Rio is a descendant of Chicanx royalty. His mother, Yolanda Lopez (1942-2021), was a distinguished artist, much beloved in San Francisco’s Mission District arts community.

Art Hazelwood creates art, organizes and curates exhibitions, and works on social and political actions. He has published two books on art and homelessness. He works in a broad range of printmaking, from artist books to street posters. He teaches at San Francisco State University and is founder of the San Francisco Poster Syndicate, a group that creates posters and prints them at live actions and events, handing out posters for free at protests in the spirit of generosity.

Richmond Art Center has been sharing art and creating with community since 1936. Our programs encompass classes, exhibitions, and events at our facility, as well as off-site activities that bring free, high-quality art-making experiences to WCCUSD schools, community centers, and Richmond Public Library.

Emmy Lou Packard: Artist of Conscience at Richmond Art Center explores the life and work of Emmy Lou Packard (1914-1998), a remarkable artist known for her paintings, prints, and murals, as well as her activism. Packard’s linoleum prints celebrated ordinary people—their work, their history and their environment. Her art was not overtly political, but expressed her progressive values. One of her signature images, Peace is a Human Right (c. 1950), shows three children, Asian, Black, and White, seated around a sunflower. The message is framed in human terms—children are not political; they are just children.

Through artworks, photos, and ephemera, the exhibition at Richmond Art Center will be organized around key periods of Packard’s life. Packard was mentored by Diego Rivera and became his principal assistant on the mural he painted for the Golden Gate International Exposition in 1940, which is currently on view at SFMOMA. During World War II, Packard worked at Fore ‘n’ Aft, a magazine published for Kaiser shipyard workers in Richmond. Later in life, Packard mentored a generation of mostly female and Chicana artists in the Bay Area. She also led the movement to save the Mendocino Headlands from development. The exhibition is curated by Robbin Légère Henderson and Rick Tejada-Flores.

First Thursdays in August is sponsored by Cruise.

Major support for First Thursdays is provided by the Hearst Foundations, illy, and United Airlines.

Generous support is provided by Nancy and Alan Schatzberg and Kay Harrigan Woods.