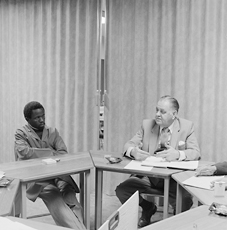 South Africa in Apartheid and After

This exhibition illuminates a vital, difficult, and contested period in the recent history of South Africa from the perspectives of three photographers: David Goldblatt, Ernest Cole, and Billy Monk. The son of Eastern European immigrants, documentary photographer Goldblatt came of age under apartheid and observed the increasing entrenchment of racial inequality in his country. His early project In Boksburg (1982) portrays a typical suburban white community shaped by what the artist calls “white dreams and white proprieties.” Included at Goldblatt’s request, photographs by Cole and Monk expand the exhibition’s field of view. Cole, a self-taught black South African documentary photographer, observed the other side of the racial divide in the 1960s, making photographs that are eloquently observant and deeply humane. Monk’s work offers a raw and witty record of The Catacombs, a rowdy Cape Town nightclub where he worked as a bouncer in the 1960s. These three groups of pictures are complemented by a selection of Goldblatt’s recent, post-apartheid photographs, sober yet hopeful records of an imperfect, still-evolving democracy.