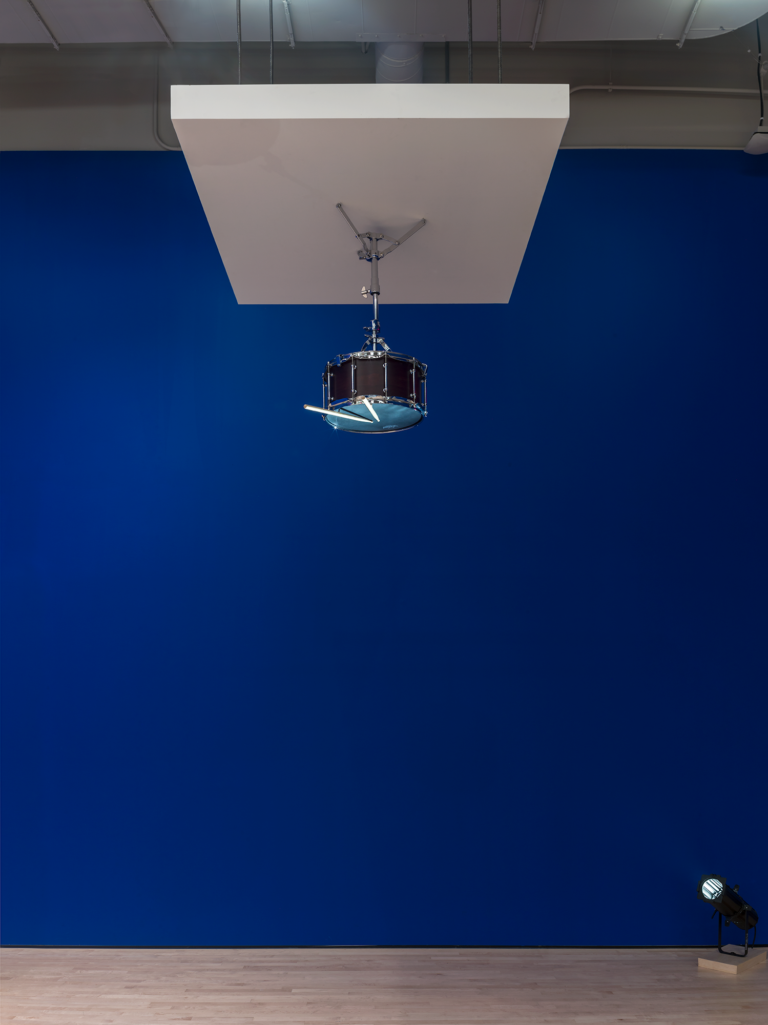 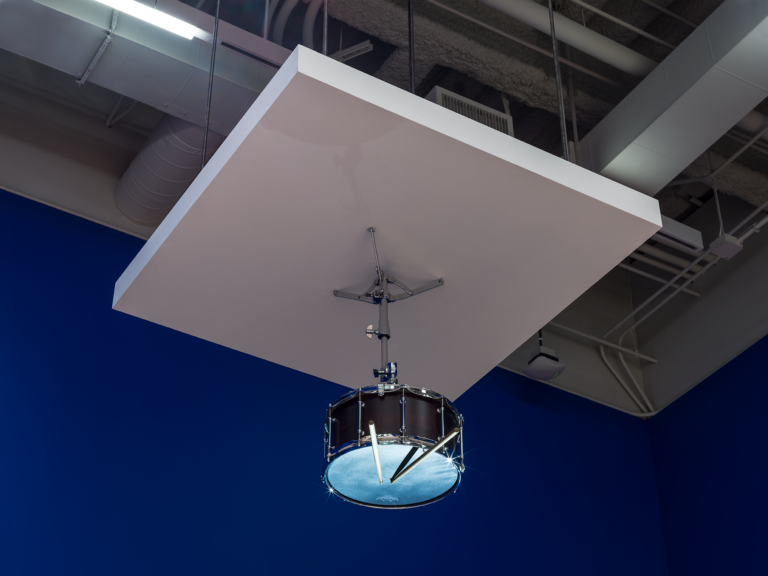 A stage, suddenly upside down, hangs from the ceiling. If that wasn’t enough, an altered drum set does too. This visual pun, which turns our expectation of an instrument on its head, pushes our suspension of disbelief even further: not only do the drumsticks appear miraculously to float; they are drumming as well. Moth in B-Flat (2015) works magic, but it does so subtly. A playback device is hidden inside the drum, and the vibration of its speaker sets the membrane and the drumsticks in motion. A soft sound emanates, a series of syncopated beats rather than a forceful, steady rhythm.

Recently the Berlin-based Albanian artist Anri Sala has been building a large body of performative sculptures based on conceptual and physical inversion. Typically an instrument is played, the sound is recorded, and the recording is then played back amplified; in Sala’s sculptures the order is inverted, and the playback and amplifying device play the instrument. These works often punctuate a larger space, with the number of drums, the specifics of the sound feed, and the placement on floor or ceiling varying. An expanded version, with three suspended drums and one floor set, is called Bridges in the Doldrums (2016). The title points to a peculiar expression for the dreaded equatorial area of the Atlantic Ocean with no wind—a trap for sailors where boats can become stuck in the middle of the sea and any direction is temporarily suspended. Moth in B-Flat is the most minimal expression of this moment, which in music could be identified as a pause, an offbeat, or a “bridge”—a passage that breaks with the previously established pattern and leads to a new movement.

In this sense, the placement of this work at SFMOMA—on a landing that marks the starting point for most visitors to the exhibition—sets a tone. Visitors look up toward the ceiling, possibly disoriented, yet the work neither forcefully pushes them ahead nor puts them under the spell of a steady beat. The movement is discontinuous, the player invisible, and the instrument in an impossible position. In Sala’s words, “the body feels close to the offbeat, whereas the brain feels close to the beat. . . . [The bridge] is like a piece of subjectivity that breaks with the established subjectivity of the song.”1 Listening to this offbeat impossibility up in the air, the possibility of a different subjectivity occurs. Sala associates this moment with the Situationists’ dérive, drifting between what is lost—the forward movement—and what is gained—a subversion of bodies in space, an openness to a new direction.