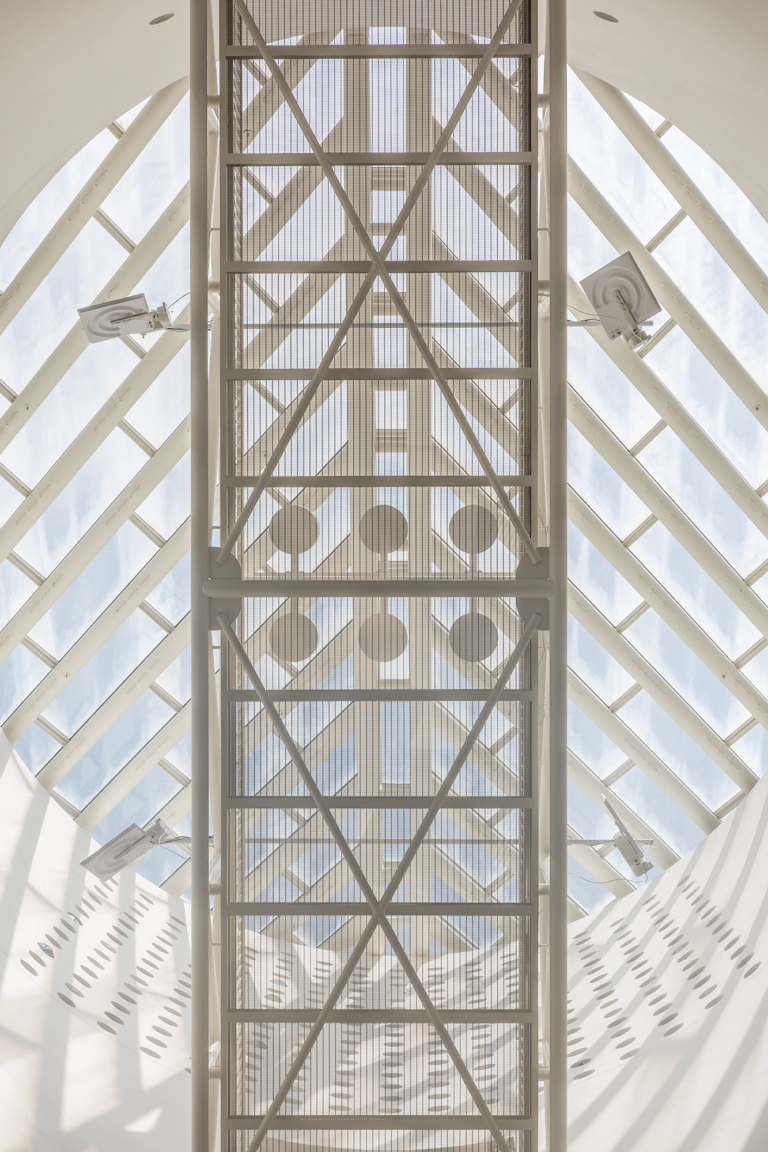 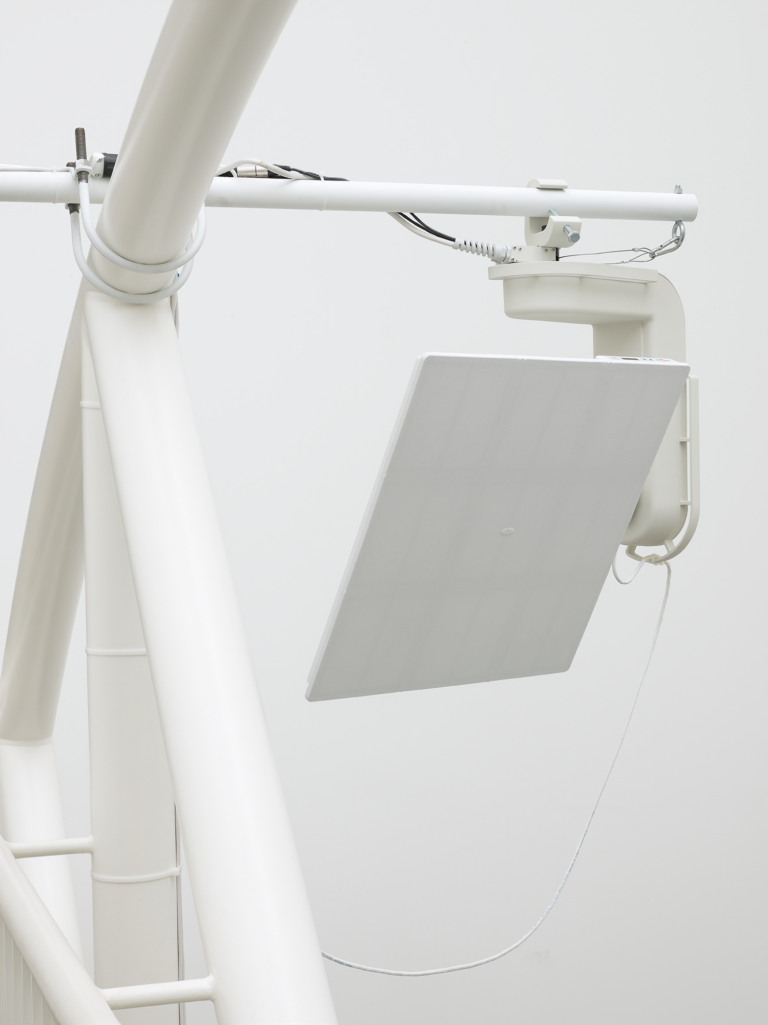 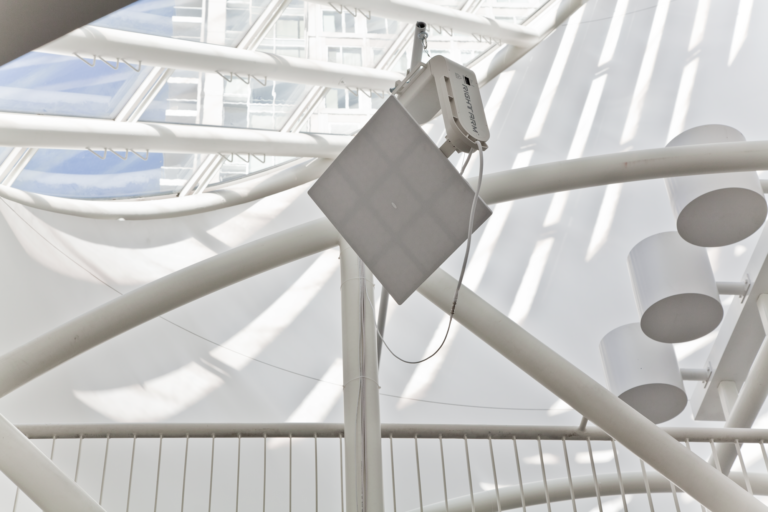 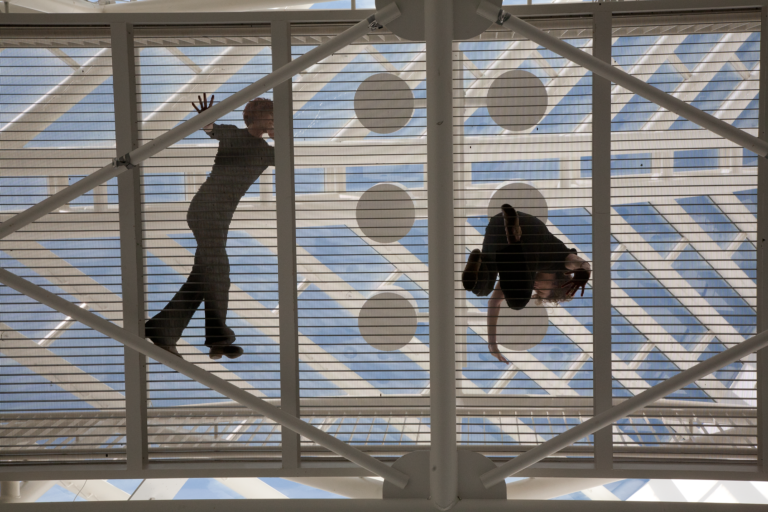 This site-specific installation by San Francisco–based sound art pioneer Bill Fontana explores both visible and invisible features of the museum building. Sonic Shadows (2010) reveals the internal resonance of structural elements like the fifth-floor bridge below the oculus and boiler room pipes, transforming them into musical instruments. The sound sculpture uses moving ultrasonic speakers and vibration sensors to turn the space below the dramatic circular skylight into an acoustic drawing in real time. As visitors cross over the bridge, their footfalls contribute to real-time recordings of ambient sounds. While Fontana’s previous collaborations with SFMOMA relocated environmental sounds from the regional landscape, Sonic Shadows creates a live composition generated by the building itself.

Bill Fontana’s Sonic Shadows (2010), recorded at SFMOMA in 2011, from the oculus above the fifth-floor bridge. This binaural recording is best experienced using headphones.

Stepping into the SFMOMA atrium, we were greeted by strange sounds of dripping water, metallic pings, and intermittent clicks. Just as we thought we might recognize a sound, it vanished. Sometimes it seemed to travel right past, while others seemed to swerve somewhere near. It was hard to tell, though, as there was no evidence of anything that could be making the noise—or so we were told. I can’t see and came to the museum with a number of friends, most of them also blind or visually impaired, to experience Sonic Shadows, a site-specific sound installation by Bay Area artist Bill Fontana.

Most interesting to those of us without sight was the way the ultrasonic beams bouncing off the walls demonstrated the shape of the architecture we could not see. But the piece seems especially fascinating, funny, and even subversive when you learn that the sounds ricocheting around you are ones the museum originally paid good money to exclude from the visitor experience: live sounds captured from the boiler room on the roof above the atrium. Liberated from the confinement of the mechanical loft, the noises become eerily serene and seem to resemble natural sounds from the environment.

I understand that in the absence of any other visible form of Sonic Shadows, many visitors spend a lot of time gazing at the armature and the array of speakers that move and rotate above the bridge. That seems a bit like going to a movie and watching the projector. I suspect that this may be a piece of art that is best “seen” with your eyes closed.

Artist Bill Fontana takes us to the source of his SFMOMA-commissioned sound installation Sonic Shadows (2010): the museum’s boiler room.