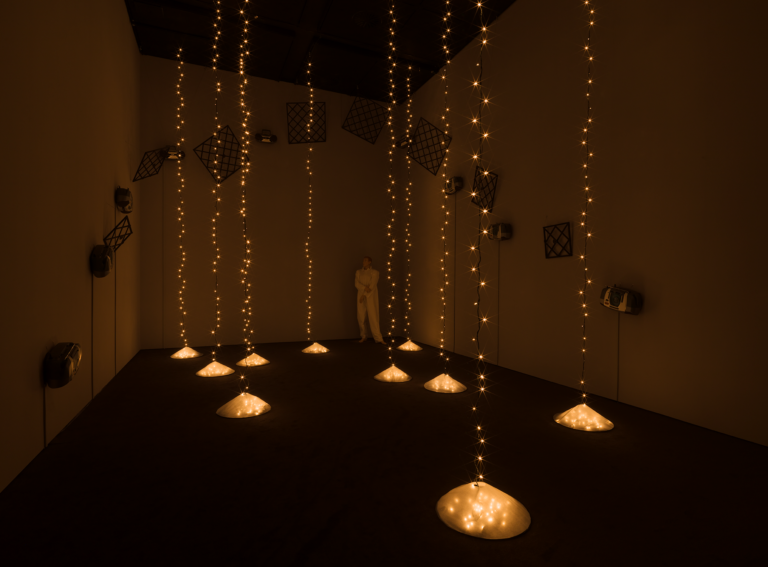 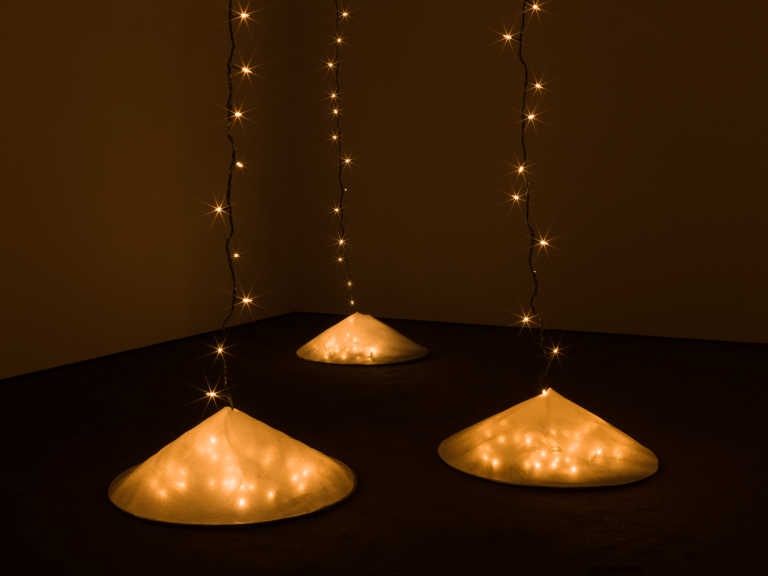 Brian Eno’s immersive environment New Urban Spaces Series #4: “Compact Forest Proposal” (2001) acts as a retreat within the bustling museum while also evoking the idea of a retreat within the city. The title suggests a speculative proposal, “an architectural submission for a new space” in the form of a “simulated forest of the future.”1 Spiraling string lights rise up from the carpeted floor like tree growth or underwater bubbles. Floating layers of electronic music—composed by the British artist, musician, and producer—issue from various sources and envelop the room. As one’s eyes adjust to the darkness, a figure emerges from the back wall, a blond male mannequin who appears to contemplate the cloud-like arc of suspended boom boxes and square wood grids overhead.

During the first presentation of this work, as part of the exhibition 010101: Art in Technological Times at SFMOMA in 2001, visitors often spent considerable time in this dreamlike space. Eno has observed that his installations—with few recognizable images, slow changes, and no narrative—produce a calming effect, noting that his intention is to seduce people to slow down and stay longer, enjoying their own company.2 His aim finds a parallel in one of the defining principles of SFMOMA’s new building expansion: to create more intimate spaces allowing visitors to pause, to rest, and to contemplate views of the city as well as the artworks on view. The theme of future thinking recalls Eno’s role as a founding board member with the Long Now Foundation, whose name derives from a term he coined after moving to New York from England and experiencing a different cultural perspective on the notions of “here” and “now.” The foundation’s objective is to “provide a counterpoint to today’s accelerating culture and help make long-term thinking more common.”3

Eno first used the term ambient to describe the spacious sounds on his pioneering 1978 album Music for Airports, and then developed numerous visual and aural experiences that would unfold in much the same way. He initially called his environments Places, numbering them sequentially and by location (Place Number 12, London and so on), and then titled them Quiet Clubs, a phrase referring to “the kind of club I’d like to go to—or music for more senses.”4 The continuous, asynchronous audio from the ten portable CD players on random mode in New Urban Spaces Series #4 conceptually builds on elements from the artist’s previous installations and his albums Kite Stories (1999) and Music for Civic Recovery Centre (2000), also remixing variations of some of the same tracks. Eno’s audio CD Compact Forest Proposal: 5 Studies for “010101,” published by his label Opal Ltd. in 2001, features different tracks described as representing possible “conditions” of the SFMOMA installation that it might randomize itself into.5

Eno describes New Urban Spaces Series #4 as a generative composition, although the permutations are not software-driven. The ever-changing combination of tracks played on random is unlikely to repeat itself in any individual listener’s experience. Recordings of found generative systems such as wind chimes, gongs, and bells are joined with other sounds and with silences, creating a drifting aural landscape that is effectively infinite.