This is the sound that must have followed the shutter on Aaron Siskind’s camera when he made the above image on the shore of Lake Michigan in Chicago. It was the summer of 1961, and Siskind was photographing youthful divers jumping off a diving board. One after the other, they hurtled themselves into the air and plunged into the water below. Likely, in between splashes: laughter and shrieks of delight, the roar of passing speedboats, and the persistent hum of traffic along Lakeshore Drive.

You may not have envisioned this soundscape without knowing the backstory, since Siskind eliminated a major element from the picture: the surface of the lake. Isolated against the blank, overcast sky, the backlit body appears to hover and fall — toward what is anyone’s guess. Even the image’s presentation in square format thwarts the viewer’s effort to detect a gravitational pull. Suspended in mid-air, the figure embodies how the act of falling can be associated with both freedom and peril, joy and fear.

This photograph is one of hundreds of such images that Siskind (1903–1991) made throughout the 1950s and early 1960s and collected into a series he called Pleasures and Terrors of Levitation. Known for his documentary work in the 1930s, in subsequent decades the photographer shifted to a more personal, metaphorical mode of practice in line with the lyrical work of Minor White, Harry Callahan, and Frederick Sommer. Pleasures and Terrors showcases how Siskind used photography to transform familiar scenery and surfaces — pavement, graffiti, peeling posters, isolated figures — into abstract forms that invite the viewer’s imaginative projection. 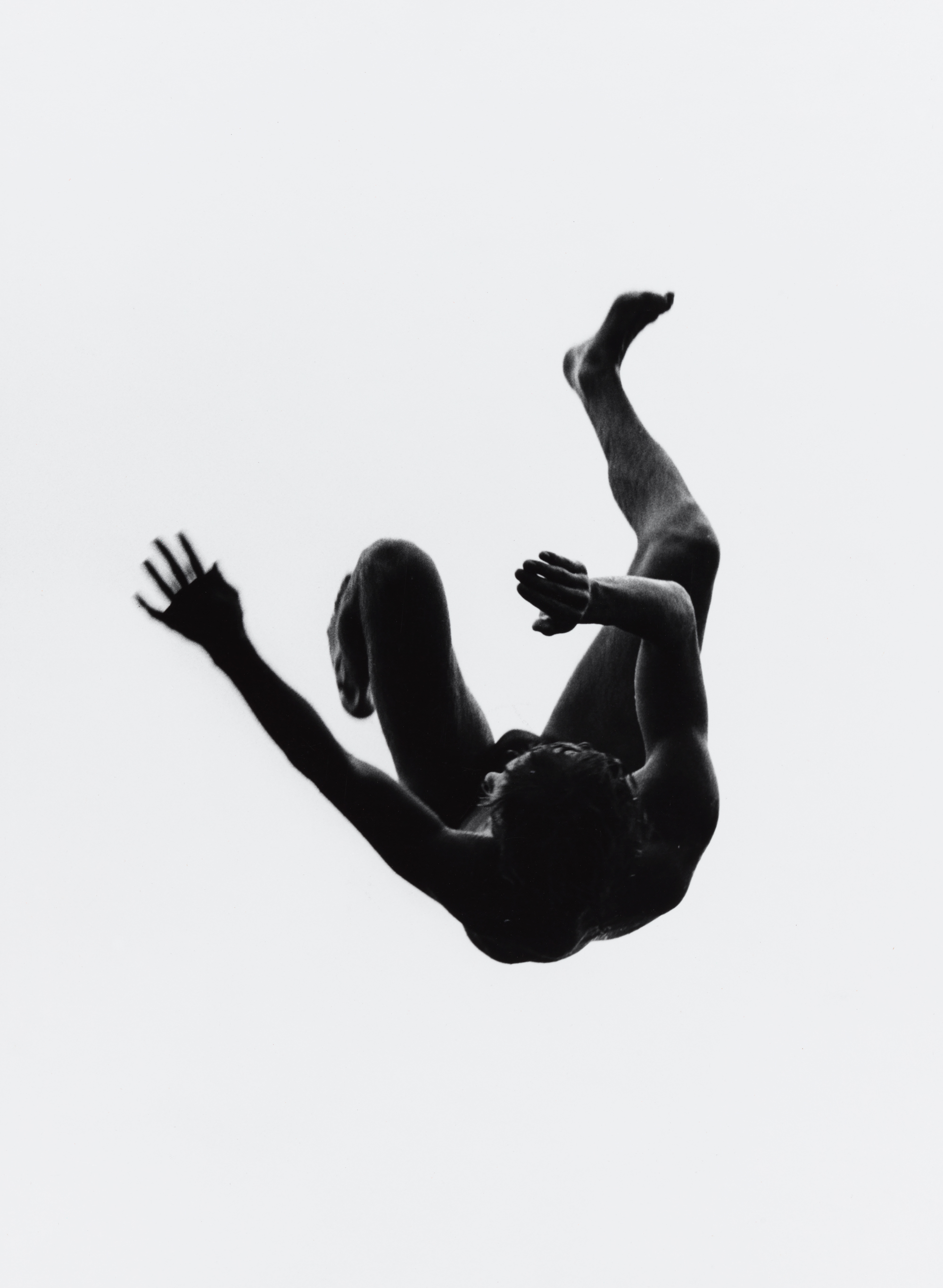 Siskind harnessed the variables of seriality, the frame, and time to conjure the polar associations for which Pleasures and Terrors is named. Viewed on its own, any single picture from the series might prompt questions about the diver’s identity or other context. Yet juxtaposed, they become visual permutations of one another. In addition to excluding the water from the frame, Siskind also used darkroom technique to eliminate the clouds. Without these elements to orient us in three-dimensional space, the setting and the figures’ identities become less important than the interest they hold as two-dimensional graphic shapes. They even begin to resemble letters or script.

A letter is a kind of sign, a shape that we learn to interpret as a unit of meaning in language. It is a symbol that refers beyond itself. Siskind intended for his divers, too, to refer beyond themselves, to function as metaphor. “The interior drama is the meaning of the exterior event,” he remarked in a 1945 article for Minicam Photography. “And each man is an essence and a symbol.” For Siskind, photographs could serve as analogs of sensations or emotions and, in the case of Pleasures and Terrors, contradictory ones. The divers’ gestures and contortions evoke varying degrees of pleasure and terror: some figures embody more grace or intention, while others project reckless abandon — and this mixture, of course, is a matter of interpretation.

For Siskind, the ability to capture the divers in stark isolation against the sky, separated from the flow of lived time, is what imbued them with metaphoric possibility. “The guy was a diver, but he wasn’t a diver,” Siskind reflected in a 1978 interview. “He was levitating as if in a dream state, and then I knew what I was after.”

Emilia Mickevicius is a historian of photography and curatorial assistant in the photography department at SFMOMA.
read more