Anthony Hernandez has long been interested in photographing spaces that most people—entire populations, even—ignore or simply never think about. Continuing his long-standing interest in homeless encampments (the quintessential forgotten or ignored space), Hernandez began his Forever series in 2007 and was entirely consumed with it until 2012. Rather than shooting what homeless people had left behind, as he had in previous projects, he situated himself in places he could tell they had occupied, got down low with his tripod, and pointed his camera at what they would have seen from that vantage point: a view up at the sky, or at a nearby tree, or at a wall. The territory he covered included downtown Los Angeles and the poorer neighborhoods of Compton, Watts, and South Central. 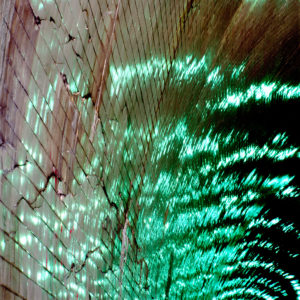 Anthony Hernandez: Forever will published by MACK in November 2016

Several of the Forever pictures are included in Hernandez’s solo exhibition at SFMOMA, on view through January 1, 2017, and many more will be in a new book devoted to the series soon to be published by MACK. The series title is poetic yet specific: “A decade since I started this project, and more than that since I began shooting homeless encampments, the homeless population of Los Angeles has only increased. It’s amazing; it’s a crisis, this incredible influx. I could realistically keep photographing this subject, making these kinds of pictures, forever.”

For this series Hernandez used a much longer lens than usual. “This was part of my strategy to approach the scene from the homeless person’s point of view. The typical Hasselblad lens is 80mm. I went longer: 120, 200, even 500mm. It creates particular effects.” Forever #20 (2007) shows what looks like a night sky full of constellations, but is actually spiderwebs on a concrete ceiling. Forever #74 (2011) shows what looks like a kaleidoscopic disco-ball light effect, but was taken from the ground of the 2nd Street Tunnel in downtown L.A., looking up at its tiled wall and ceiling. 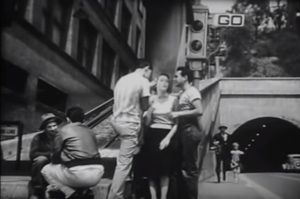 For Hernandez the tunnel is familiar territory where he roamed as a teenager. Millions of others may recognize the location from its star turn in several movies. Its reflective white tiles have lent drama to scenes in M (1951), The Driver (1978), Blade Runner (1982), The Terminator (1984), Gattaca (1997), and Kill Bill Volume 1 (2003), among many others.

Paul Clipson, SFMOMA’s longtime AV technician and a filmmaker in his own right, explains that in the movie industry, effects like that green are usually regarded as a mistake and “corrected” by shooting with tungsten film or using filters and gels over the lights. “But the result in Forever #74 gives the tunnel a ghostly atmosphere,” he says. “I shot in the 2nd Street Tunnel myself for my 16mm film HYPNOSIS DISPLAY (2014), made in collaboration with Liz Harris (Grouper). Like Hernandez, I like to study urban spaces that are devoid of people. I’m also interested in film history, especially in the case of Los Angeles, and locations in film noir. For instance the fact that the 2nd Street Tunnel appeared in Joseph Losey’s M and in Blade Runner, and the fact that it’s in the Bunker Hill neighborhood, which has an evocative history in film.”

HYPNOSIS DISPLAY is a collaboration between Paul Clipson and Liz Harris (Grouper), and was a commission for Leeds Opera North in the UK. 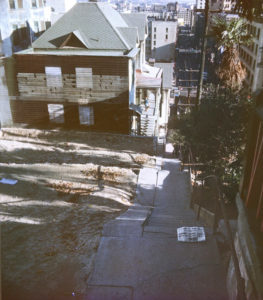 Bunker Hill was very posh when it was first built in the late nineteenth century, but its rich residents gradually abandoned it to move to Pasadena, Beverly Hills, and other wealthy suburbs. Around World War II, its old Victorians were complemented by numerous new apartments to accommodate the massive influx of war workers, and it became vibrant and multicultural. In the decades that followed, its rich amalgamation of old and new architecture, alleys, stairways, and general vibe of dilapidation made it a popular Hollywood filming location. Starting in the 1960s the area was massively redeveloped and most of that history is now gone, but artists like Clipson remember, and still feel something in the air there.

For Hernandez the tunnel is the perfect example of an interstitial space, one you wouldn’t spend time in unless you don’t have a car—a situation that, in L.A., one avoids at all possible, given the city’s notoriously car-centric infrastructure and culture. Hernandez made a whole series on this subject in 1979 and 1980, called Public Transit Areas, showing Los Angeles bus stops and the people huddled there, waiting.

“The tunnel is a place you aren’t meant to linger in,” reflects Clipson. “You can walk through it, but it’s not pleasant. There’s gas fumes, and it’s sooty and dark. I like to shoot in places that are avoided or overlooked—not unusual, but rather invisible to most people. The camera’s focus and framing contextualizes a space, and emphasizes certain things that, on film, take on an unlikely beauty or unusual visual qualities. Like those captivating reflections of light in the tunnel.”

Clipson and Hernandez use different terminology to speak to the idea of urban wandering, with the aim of capturing one’s discoveries on film. “I think of myself as making field recordings,” says Clipson. “It’s a dérive, in the sense of Guy Debord—a playful, nonsensical walk that changes your relationship to space. You’re not functioning in the city as you’re ‘supposed’ to, and as a result, the city restructures itself around you. Artists do this as a daily practice.”

“I’m constantly walking, moving,” says Hernandez. “I always talk about my first 35mm street photos of people as the results of a very fluid dance through downtown L.A. spaces. These days I suppose I’d have to call it a ‘slow dance’ because I have a tripod, so I work more methodically, but I’m still constantly moving through the streets. Whether it’s a bus stop or a tunnel, I don’t linger too long. I’m not one of those photographers who sets up their tripod and stays there for half an hour. I’m there for a minute or two at the most.”