Fragmentation, Mourning, and Fragility in A Slow Succession with Many Interruptions 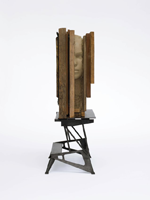 The history of art — the history of anything, really — rarely sorts itself into tidy decade- or century-long chunks, yet sometimes events intervene to make it a little easier to organize. I’m specifically thinking here of the 2001 World Trade Center attacks, which for many became a clear point in personal and national history with a decisive “before” and “after”; or, perhaps, the sudden proliferation and commercialization of the Internet in the late 1990s, both of which happened to fall at the end of the century, the end of the millennium. The artworks in A Slow Succession with Many Interruptions were all made “after” the year 2000, and it’s difficult, says assistant curator of Painting and Sculpture Jenny Gheith, to walk through and not notice a few thematic threads that seem to exemplify our twenty-first-century condition. “I thought at first about arranging the works in a more overt way, like, works about technology, works about intimacy, works about history and time,” she reflects. “But in the end I decided to leave things more open-ended and let visitors make those connections on their own.” The works are all drawn from SFMOMA’s collection, and just over half are on view at the museum for the first time.

One theme that appears and reappears, starting from the moment you enter the gallery, is fragmentation. We immediately encounter Mark Manders’s Big Head Female (2011), a large sculpture of a head that has been sliced in half and is seemingly compressed between vertical boards. “It is made to look like the artist is still working on it,” notes Gheith, “like the clay is still wet, although it’s actually painted epoxy.”

The concept of the fragment appears again in two works by Danh Vo, Lot 20. Two Kennedy Administration Cabinet Room Chairs (2013) and We the People (detail) (2011–13). The first consists of upholstery twine and nails from the two eponymous chairs; the other parts, for example the wooden frames, exist elsewhere, in collections other than SFMOMA’s. Post–Kennedy administration, the chairs were owned by Robert S. McNamara, known as the architect of the US Vietnam War strategy. In taking them apart, Vo references his own history as a postwar refugee from Vietnam. “There is an implied violence to the way that Vo has disassembled these silent witnesses to the war,” notes Gheith, “in terms of both their historical implications and their deconstruction.”

Vo’s We the People (detail) is a section of a full-scale copper replica of the Statue of Liberty; again, the other pieces are in other collections. Vo has said his intent here is to “have people negotiate what they think of freedom,” and I can’t help seeing it as a deliberate, methodical deconstruction of freedom, or the idea of it. “When we were preparing for the exhibition,” remembers Gheith, “I learned that the original Statue of Liberty was made in the same pattern of fragments, which were shown separately around the country to raise funds for the project. The part of Lady Liberty that our sculpture replicates is a section or her gown from just below her arm, and just like the real statue, it is two pennies thick.” Thinking of it in those terms makes the original (and what it represents) seem far more fragile, and more fragmented, than I’d previously imagined. 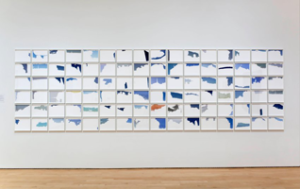 Of course any object-based artwork is a sum of elements which could theoretically be deconstructed. But everywhere you look in this show there are overt, deliberate conglomerations of things, pastiches of disparate elements, juxtapositions. There is also, I think, a not-unrelated sense of mourning in many of the works, not always directly associated with 9/11 but sometimes operating in quite close proximity. Walid Raad’s Cotton under My Feet (2007) is a series of ninety-six different inkjet prints in which the artist attempts to remember the color of the sky just before the 9/11 attacks. “For some reason,” says Raad in the text piece accompanying the work, “I needed to see that blue again, desperately looking for it in photo and video archives, and on color swatches in paint stores.” He never “found” it, but he did imaginatively narrow down the possibilities to the ninety-six blues on view, based on legal transcripts from the terrorist-related trials years later: “I was taken aback that almost every prosecutor and defense attorney in the US began their respective opening statements with lengthy descriptions of the clear blue sky on 9/11.”

Mourning and historical looking-back are evident in many other works. Tacita Dean’s c/o Jolyon (2012–13) updates postcards from the city of Kassel, Germany, before it was destroyed in World War II with contemporary views. Dora García’s Film (Hôtel Wolfers) (2007) turns the eponymous hotel in Brussels, built in the 1920s, into a kind of “crime set,” in the artist’s words, playing up the ominousness of its decay over time. And Robert Gober’s Death Mask (2008) is an homage to a beloved pet who died unexpectedly, embodying not just mourning but also the fragmentation noted earlier: it’s an amalgamation of the dog’s face and Gober’s own. “It’s very haunting and strange,” notes Gheith. Kevin Beasley’s Untitled (shoulders) (2014) is a torso-like form made from a muumuu (purchased where the artist’s mother and grandmother shopped for them) and a piece of rug from his apartment, shaped into a permanent form with resin. “It looks intentionally corporeal, like a strange being emerging from the wall,” notes Gheith. “We hung it a bit lower than you’re used to seeing objects in a museum. The artist specified that it should be installed at shoulder height, so we based our measurements on the shoulder of one of the installation crew members.” To me it has a spooky, spectral effect, like a house-haunter moving between rooms.

Fragility is another theme Gheith points to. “Whether it’s the fragility of memories, of time, of love, it’s apparent in a lot of the works. Perhaps it’s a reflection of our sense of our own precariousness, today.” Lutz Bacher’s Black Beauty (2012–13) consists of numerous disparate elements, including a shattered mirror and a photograph showing a detail of her late husband’s chest. “He was an astronomer at Berkeley, and the work in many ways is about mourning his death,” Gheith explains. It’s meant to be hung just enough above eye level so that you have to look up; her husband is there, but just out of reach.”

Gheith is quick to note that none of these themes are exclusive to the twenty-first century. “Fragmentation, for instance, was also a theme for Dada and the Surrealists,” she points out. Remember the exquisite corpse, or Hans Bellmer’s dolls? “But the way these works describe fragmentation is so timely in their reference to the constructed sense of self, of bodies, today. I have a young son, and one of my mother’s favorite games to play with him while talking on the telephone is to say ‘Help! I’m in the phone!’ We’re so used to disembodied voices, we don’t even think about it anymore, but when I imagine it through my son’s eyes it seems so exemplary of our contemporary condition.”