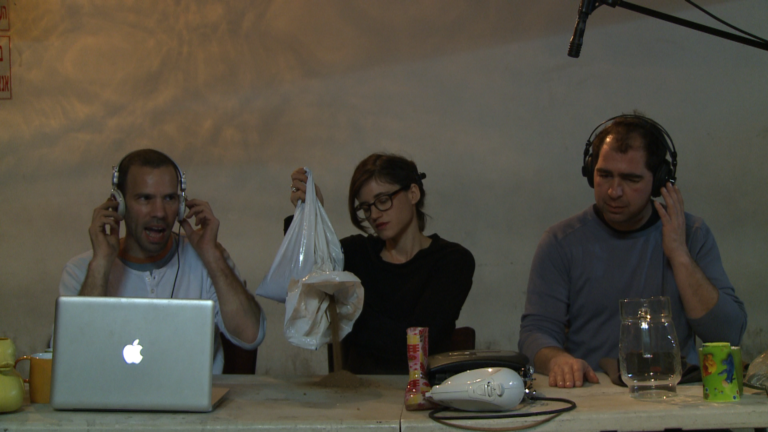 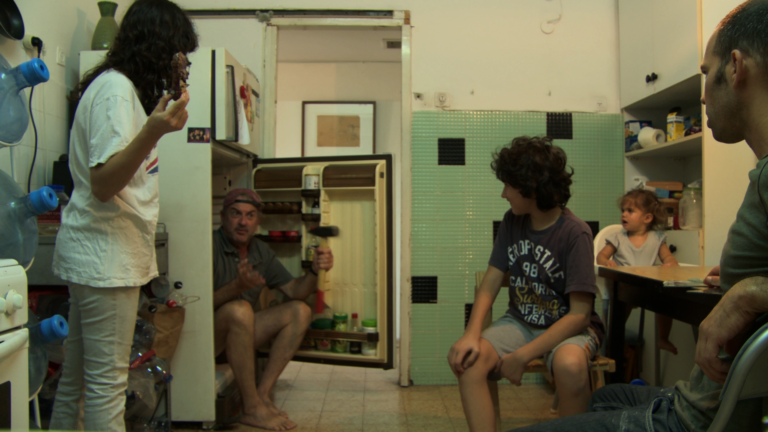 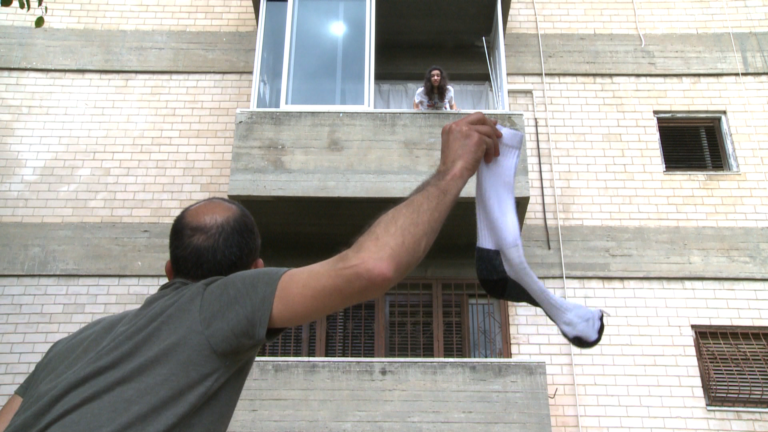 The title of this exhibition finds its most literal correspondence in Guy Ben Ner’s video Soundtrack (2013), in which a family drama—featuring the artist’s kids as actors and his Tel Aviv apartment as the setting—unfolds to the sounds of Steven Spielberg’s 2005 apocalyptic blockbuster War of the Worlds, itself loosely based on H. G. Wells’s novel of the same name. “[The basic idea] is the mechanism of the work—budding, or the opposite of dubbing—images to a pre-existing, readymade soundtrack,” says Ben Ner.1 For the viewer who may not even know Spielberg’s film, this domesticated version operates autonomously as its own action film, accompanied by the generic features of the original soundtrack, here adapted to a new setting.

Sound recorded on-site, a key component of documentary ethics, is diametrically opposed to the illusionistic sound effects that are used in most feature films and are a hallmark of overproduced Hollywood blockbusters. Foley artists, who create sound effects using live techniques in a studio to simulate and often enhance the film’s action, occupy a space in between. The ultimate goal of their highly inventive craft is to support the visuals in the most seamless way; one simply shouldn’t notice that a foley artist has been at work on the postproduction of a scene. Ben Ner reverses this illusion. As he assumes the role originally played by Tom Cruise, the heroic father who frantically acts to protect his family from an alien invasion, he takes on the part of foley artist as well. The artist states: “In the end you have two movies, like Siamese twins, sharing one and the same organ: The Sound. Needless to say, one of the twins is a thief, the other—a property owner.”2

With this film, the Israeli artist continues his signature approach, creating a “home movie” full of deadpan humor and low-tech subversiveness. Here, however, he crosses back and forth between ironic appropriation and political resonance. Punctuating scenes of kitchen disaster that serve as a stand-in for the extraterrestrial horror story—exploding blenders, broken bottles, flying fried eggs, tumbling toys—is real-life footage of the Israeli-Lebanese and Israeli-Palestinian conflicts streaming on the family laptop. The seamless integration of fiction, reenactment, and real-life drama undermines not only the original film from which the soundtrack derives, but, more importantly, the viewer’s identification with these “sitcom” actors and sympathetic family members. Ben Ner projects the world into a family, a condition of daily life in Israel and Palestine, and splices it together with footage from LiveLeak, a website that claims to “redefine media,” along with a cameo by the documentary filmmaker Avi Mograbi, known for critically but also humorously probing the Palestinian-Israeli conflict. Ben Ner shifts our perspective onto a drama where biography, art, and current political events share the same space. Here the line “We’re under attack!” is not only an evocation of alien robot tripods, but a dramatic expression of the endless complexities of life in times of war.