On the Occasion of the 2022 Soapbox Derby at McLaren Park 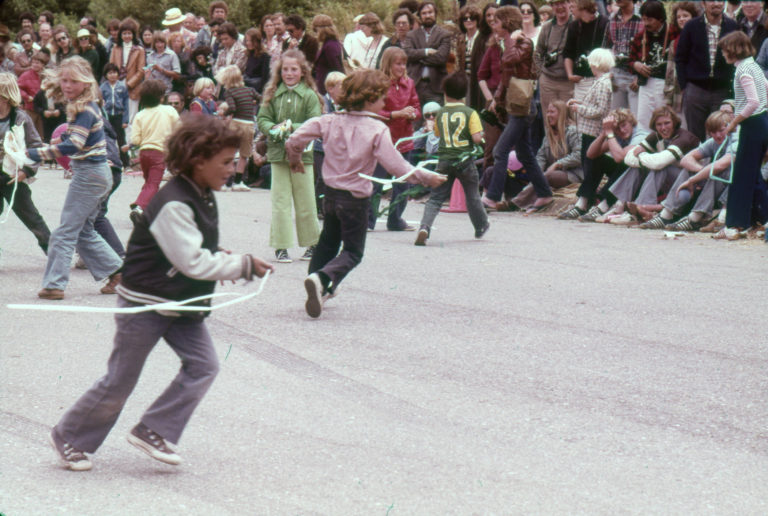 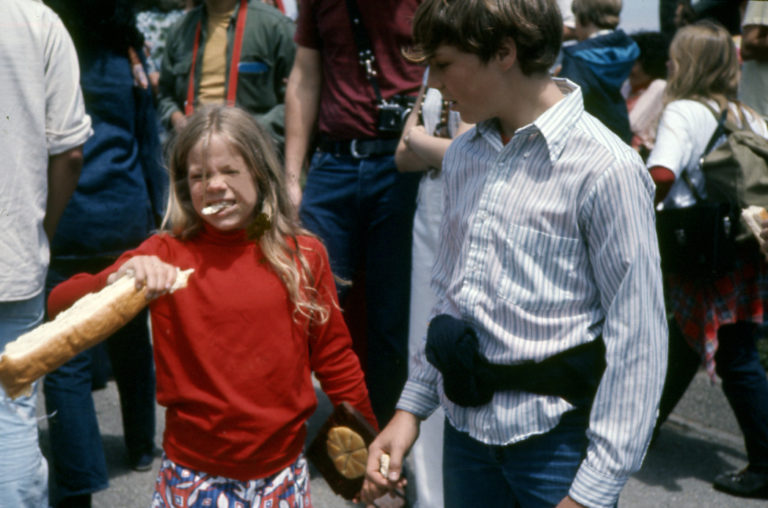 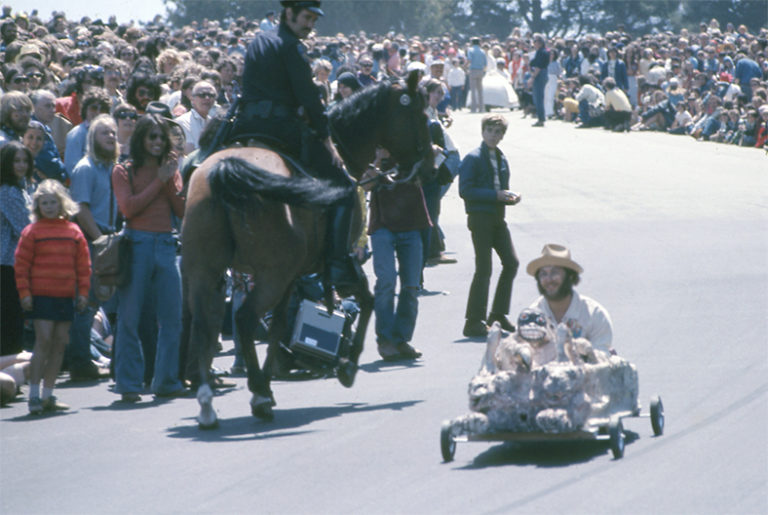 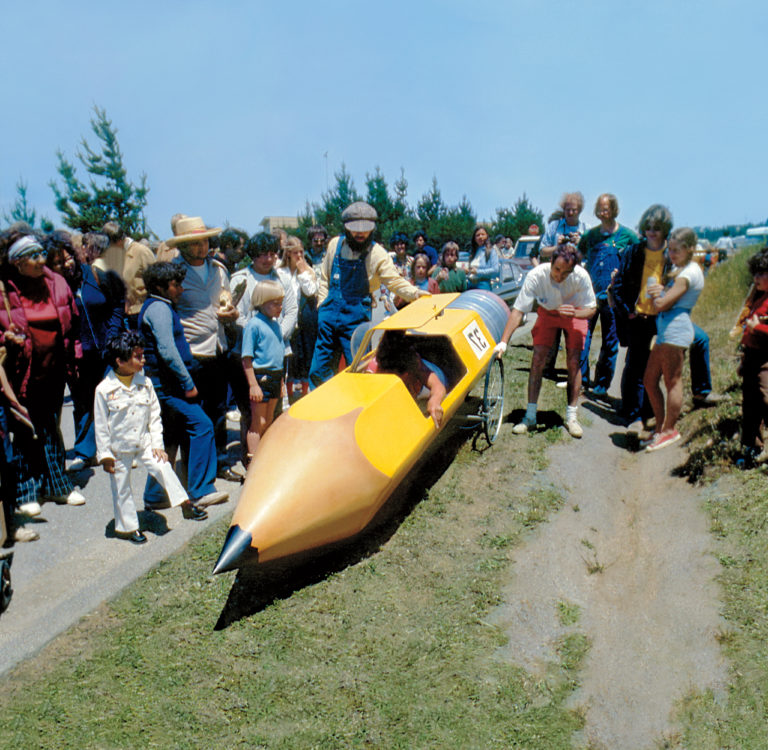 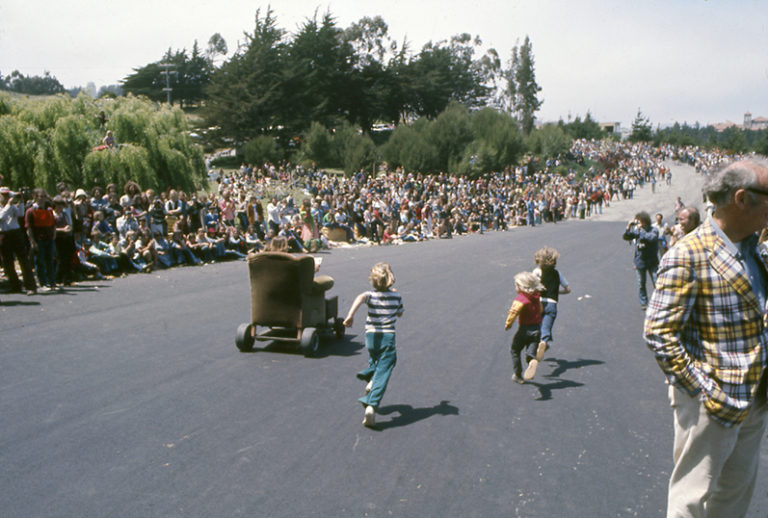 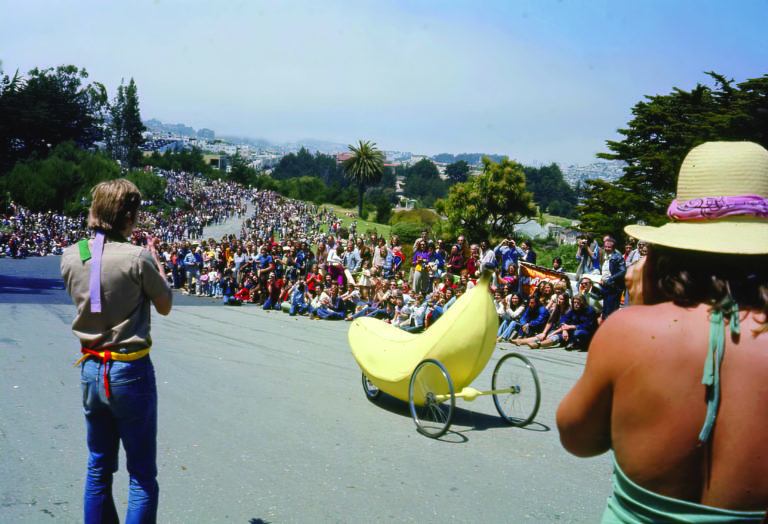 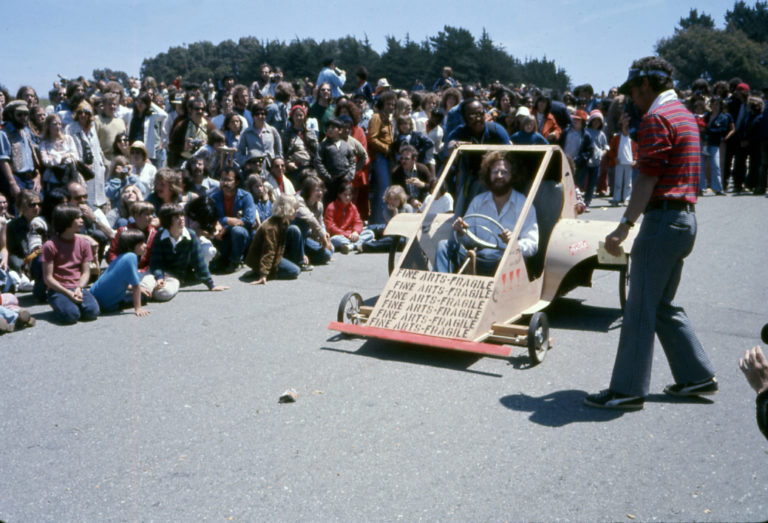 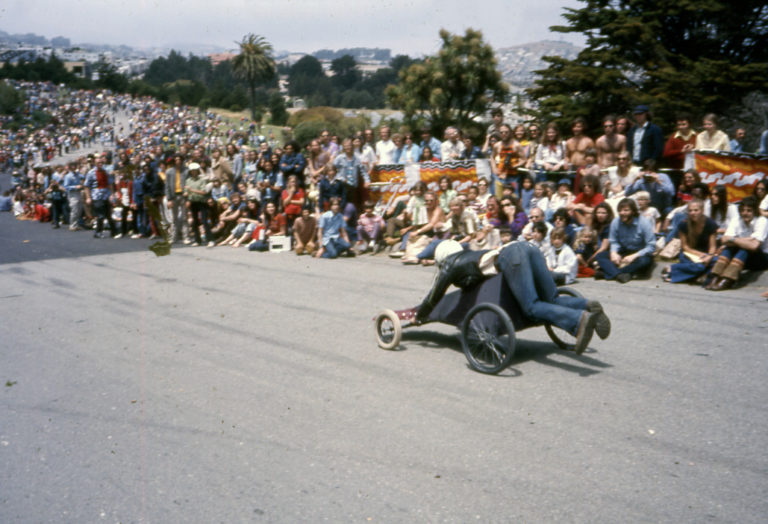 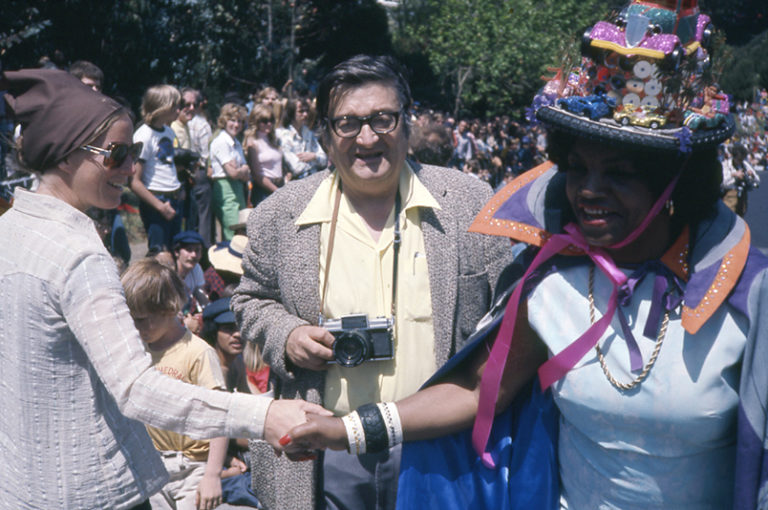 On Thursday, March 5, 2020, my department, SFMOMA’s Public Engagement, hosted a gallery talk for the 2019 SECA exhibition with artists Kenyatta A.C. Hinkle, Sahar Khoury, and Marlon Mullen. I remember awkwardly elbow bumping friends and colleagues, as handshakes seemed off limits since there was no clear guidance on how to avoid COVID-19. At the mixer after the tour, visitors, artists, and staff sipped wine and casually chatted in the Koret Education Center, not knowing that it would be another year and a half before we held another in-person public program at SFMOMA.

The pandemic made gathering — the very thing we do in public programs — harmful, perhaps even deadly. We sheltered in place. We socially distanced. We wore masks. We waited for updates from Dr. Anthony Fauci. We baked sourdough bread and kept green onions alive in mason jars. We met on Zoom, taught our children on Zoom, celebrated holidays on Zoom, and grieved on Zoom. We launched public programs on Zoom. The museum closed for a total of ten months after shelter in place went into effect in San Francisco, and finally reopened in March 2021.

While the heroic efforts of museum staff during this time cannot be overstated, the impact of the museum closure was devastating. Despite relief measures such as the government’s Paycheck Protection Program loan, by the end of the first month of the pandemic SFMOMA laid off, furloughed, or reduced the hours of more than 60% of its staff. In June 2020, the museum laid off fifty-five more employees, including a member of my small team. Museums across the country made similar decisions as they dealt with prolonged closures. A third round of cuts last year eliminated positions and longstanding, beloved programs: Film, Open Space, and the SFMOMA Artists Gallery. The Koret Education Center — a mothership for Education and Public Engagement programs — usually packed with students on weekdays pre-pandemic, became a break space for front-line staff, as school and public tours were put on indefinite hold.

It is painful, demoralizing, and heartbreaking to say goodbye to colleagues and friends, some of whom had worked for the museum for decades. While museums struggled to stay relevant, the murder of George Floyd became an inflection point for the systemic injustices in the United States, especially for Black lives. As institutions and corporations scrambled for responses, silence became a marker of complicity in the broader cultural discourse. SFMOMA’s censorship of former staff member Taylor Brandon on social media triggered a public reckoning on racial justice at this museum and museums nationwide. It is the current chapter in a decades-long fight for institutional change started by artists and activists. The struggle for equity and the elimination of programs created a further rupture between the local artist community and SFMOMA. In Public Engagement, we began the hard work of repair and rebuilding trust. The Soapbox Derby is one part of this ongoing work of outreach.

Is there still a museum if the museum is closed? Are art and museums still important when we are prioritizing survival? Two years into the pandemic, it is time to recalibrate. Museums, historically dedicated to the care and display of artwork, can be spaces for social connection, learning, and healing. They can also be spaces for radical possibility, because artists uncover truths, transcend boundaries, and open new lines of inquiry. So why a soapbox derby? In the words of Henry T. Hopkins, museum director at the time of the first two races, “The Derby is exciting, it’s funny, people have a good time, and there’s art in the vehicles, in the trophies, in the crowd, and in the unfolding of each minute as the day progresses.” After spending so much time away from the museum’s galleries, there is a realization that if we can’t be inside the space where we expect art to be, we need to bring the art to where we can be. We need joy, we need irreverence, and we need to be together. The task of organizing a third soapbox derby is no small feat. Led by the indefatigable manager of Public Engagement, Stella Lochman, the event involves over one hundred artists and organizations; community outreach to neighborhood groups in southern San Francisco; partnership development with the San Francisco Recreation and Park Department and SF Parks Alliance; and support of our corporate sponsors, The North Face, Cruise, and Bank of America. The 2022 derby at McLaren Park is a remix from the 1970s that celebrates the diversity of artistic expression in the San Francisco Bay Area today, and anyone can attend for free. This day-long, all-ages event is the result of numerous hours of efforts of over fifty museum staff, whose contributions are listed below.

Yes, we are doing this for the artists and for the public, but we are also doing this, perhaps selfishly, for ourselves. As cultural workers at SFMOMA, we need something to excite us, to give us a renewed sense of purpose. On Sunday, April 10, 2022, we will all gather in McLaren Park to witness the human capacity for imagination and creativity and our resilience as a community. Art is not just in a white cube; it can be a car made of bread that disintegrates halfway down a hill on Shelley Drive. Art can be anywhere and everywhere. The Soapbox Derby will show us that art is essential.

More on the Soapbox Derby 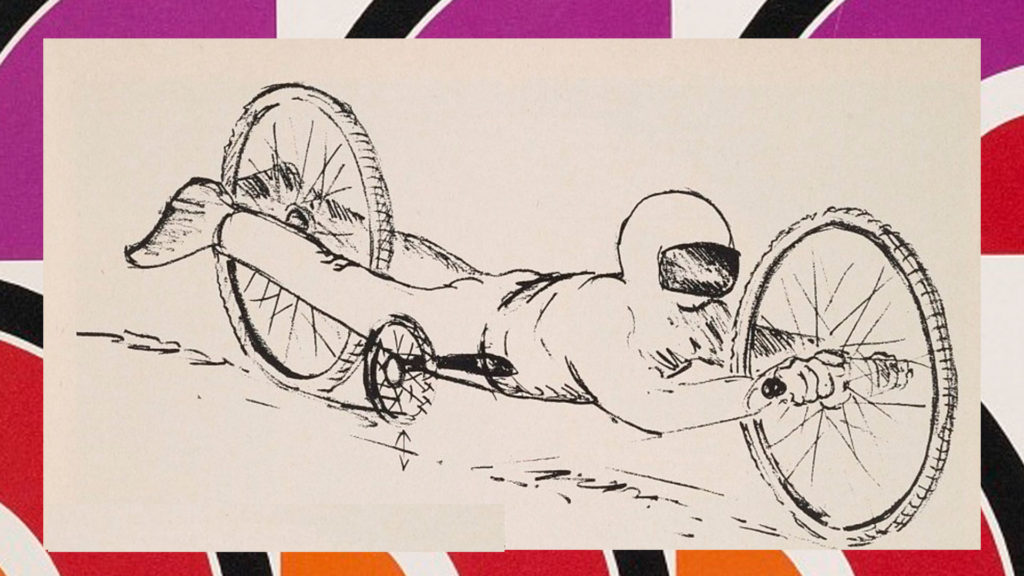 "Anything That Coasts" by Henry T. Hopkins 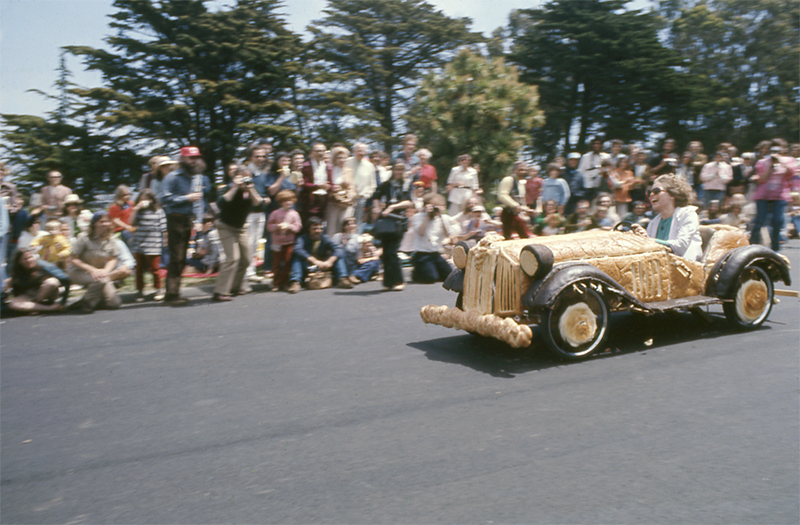 The 2022 Soapbox Derby at McLaren Park

Racing Teams of the 2022 Soapbox Derby