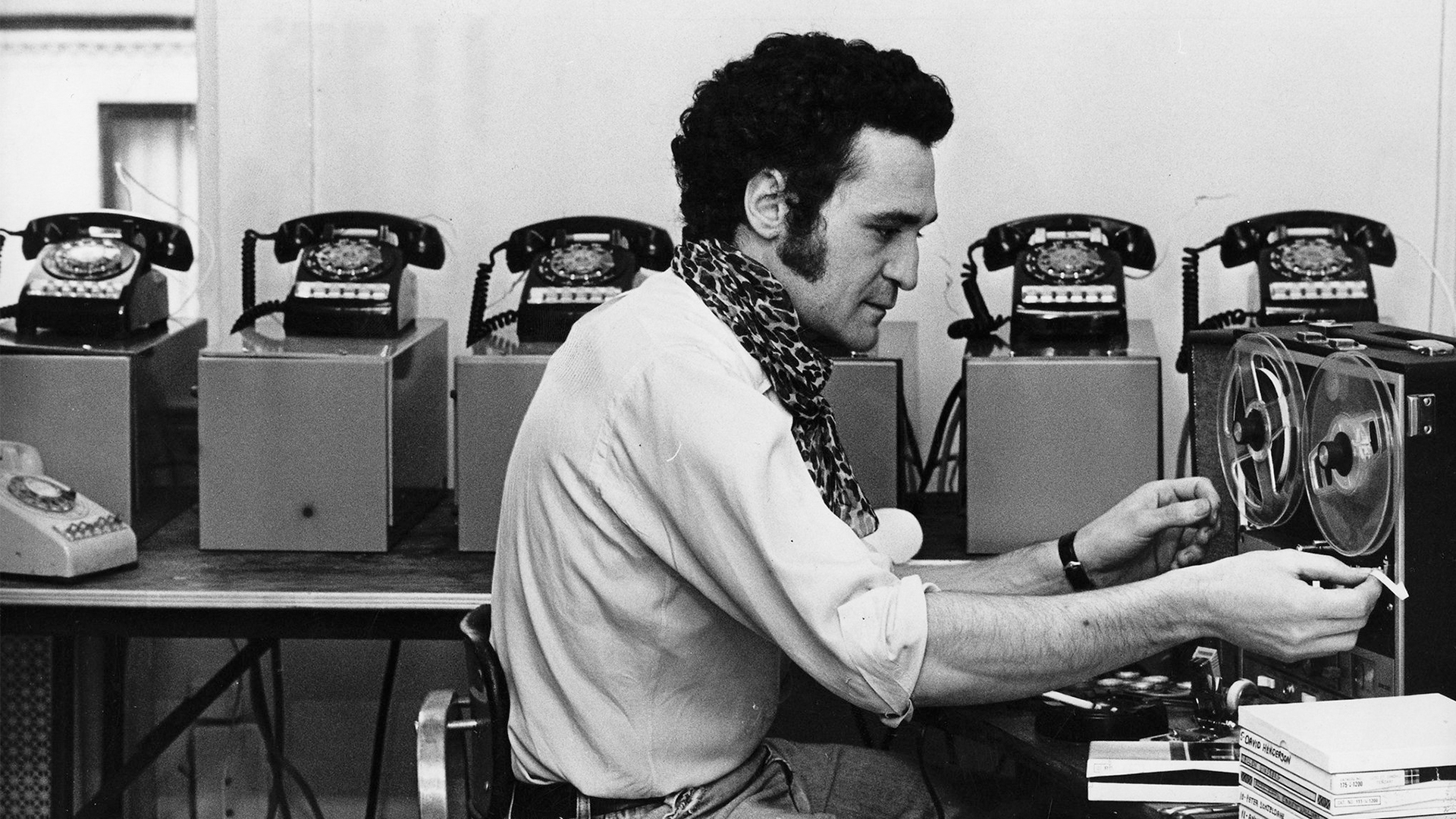 John Giorno, poet and organizer of the Dial-A-Poem project, sets up a reel of recorded poetry at the Architectural League in Manhattan, Jan. 13, 1969. Image Courtesy: Patrick A. Burns/The New York Times/Redux

Longing to hear poetry? There’s a phone number for that, thanks to the late artist John Giorno (1936–2019) and scores of his contemporaries from the New York and Bay Area art scenes.

Giorno first conceptualized the phone service Dial-A-Poem in 1968, and an iteration of the hotline still works today. If you dial 641.793.8122, you’ll access recordings from an archive of poetry and political oration. On the other line might be the voice of Amiri Baraka, Bill Berkson, Jayne Cortez, Patti Smith, Barbara Guest, or one of roughly 75 other luminaries rounding out Dial-a-Poem‘s roster. Each call nets one poem, selected at random from the treasure trove of more than 200 recordings.

The hotline is arguably Giorno’s best-known attempt to revolutionize how poetry was disseminated and consumed — an effort he continued throughout his life. Dial-a-Poem‘s number has changed since the service first debuted (you can see the original in the advert below), but the archive’s aim remains the same: bring radical artists together, and share their most potent and subversive work with anyone willing to listen. 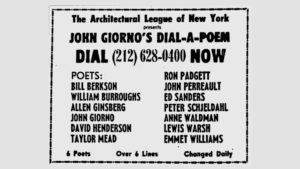 An original advert for Dial-A-Poem from its 1969 debut at the Architectural League of New York.

Giorno found inspiration for his ambitious project in friends Andy Warhol (also his partner, for a time), Robert Rauschenberg, and Trisha Brown. It was their barrier-breaking work, he said, that jumpstarted his efforts to push poetry beyond the printed page.

“Every day in ’62 and ’63, Andy Warhol and the others did some fabulous work,” he recalled in a 2002 interview with curator Hans Ulrich Obrist. “They did what arose in their minds, and made it happen. I saw the process, how their minds worked. It occurred to me that poetry was seventy-five years behind painting and sculpture and dance and music.”

“If these artists can do it, why can’t I do it for poetry?,” he continued. “That was what started the whole thing.” 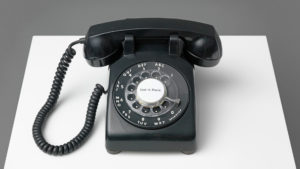 It wouldn’t take long before his efforts bore fruit. When Dial-a-Poem premiered in 1969 at the Architecture League in Manhattan, more than one million people called to access one of 10 lines in just over four months. Today, there are multiple versions of Dial-a-Poem (1968-2012) phones represented in museum collections, including an edition of the rotary phone acquired by SFMOMA.

The recordings, and the phones, remain a testament to the artist’s political engagement. Giorno took risks by including then-radical works brimming with explicit references to gay life and love. By 1970, Giorno expanded the archive’s revolutionary aims by adding poetry from The Weather People, Bernadette Dorn, Eldridge Cleaver, and others who fiercely opposed the Vietnam War.

More than 50 years later, those poems linger in the archive, waiting for callers to dial them up.

“There is something beautiful in the very thought that a performer’s voice answers our call,” Rudolf Frieling, SFMOMA’s curator of media arts, noted. “And who knows; this moment of intense listening may make our day.”

“Dial-A-Poem” is part of SFMOMA’s Media Arts collection. See a full list of poets included in the archive below, and share the poem you heard with us on social media by tagging @sfmoma.

Gillian Edevane joined SFMOMA in 2020 as a content manager. She creates and publishes online content for the museum.
read more