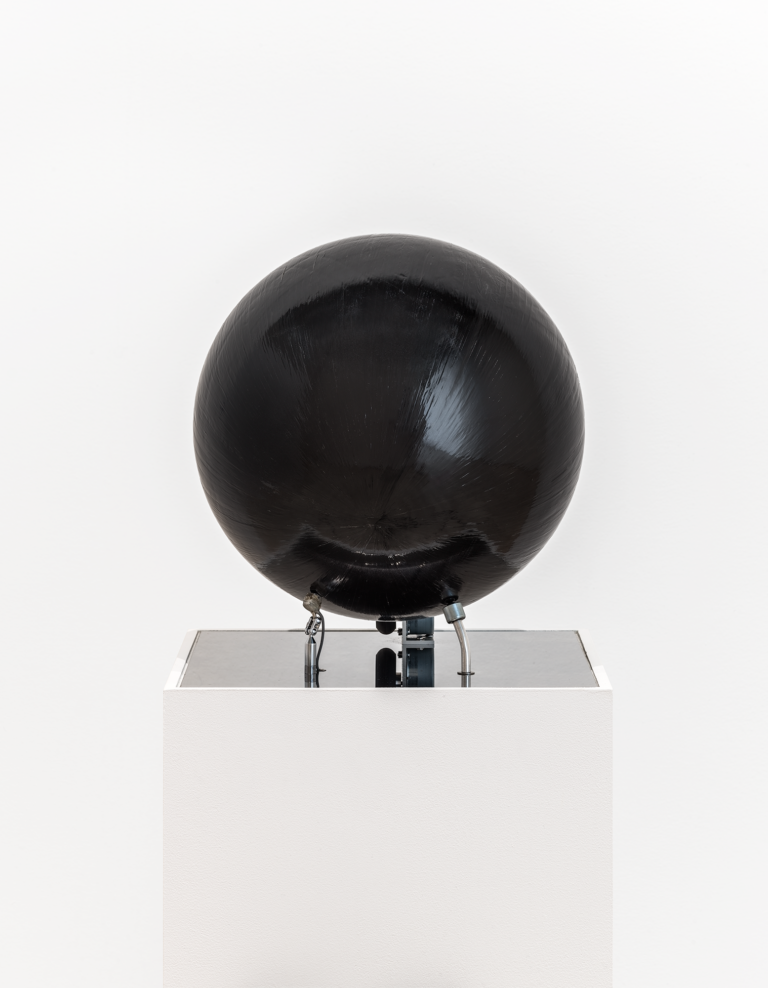 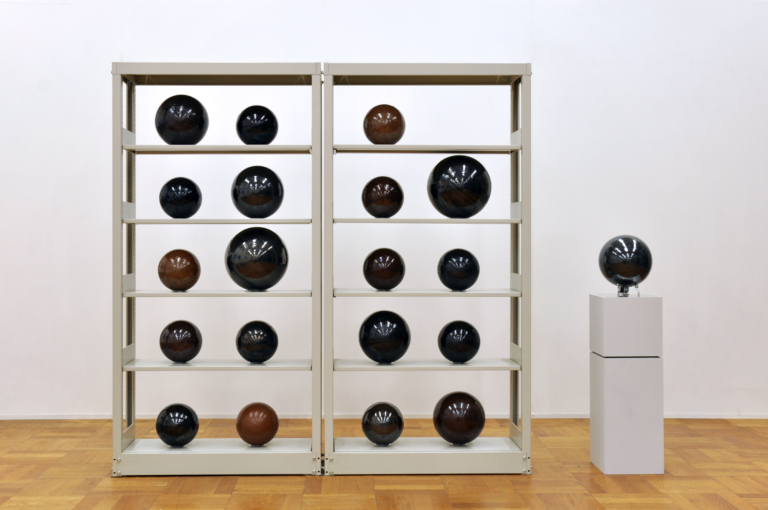 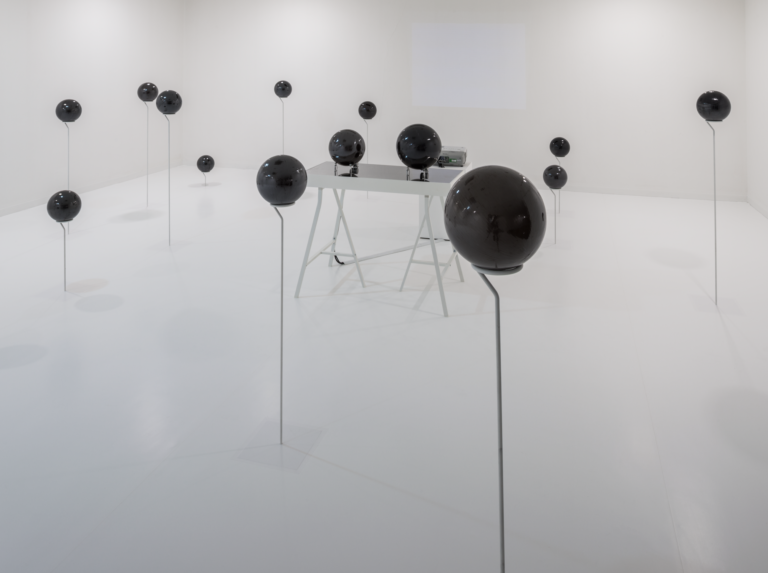 Japanese media artist Lyota Yagi produces works that reference the rich histories of sound art, sculpture, and interactive art. In each work he addresses the specificity of a given medium, recalling the aims of twentieth-century modernist artists, but he does so with a contemporary twist, producing mechanical systems that touch upon a poetic interpretation of a process unfolding in time and space. Yagi often incorporates ready-made systems and tools with an aesthetic of abstraction and attention to detail—yet despite their highly formalist appearance, his works also embrace the noise and randomness typical of Fluxus. The Sound Sphere series (2011) elegantly embodies these contradictory forces.

Soundtracks features the core sculptural, kinetic element of Sound Sphere: an installation consisting of cassette tape wound around a spherical object and a device to play its sound. There is no beginning or end to the tape; rather, a small motor randomly moves the sphere as it sits atop the player, producing noise. The work varies in scale from installation to installation. In its most basic version, as shown at SFMOMA, a single sphere is placed on the player for exhibition and performance. More complex, room-size installations include multiple spheres and additional players, and in a participatory variation, the audience can select spheres from a shelf to place them on the player. The globes vary in size, ranging from 20 to 30 centimeters (7 7/8 to 11 3/4 inches) in diameter; the length of recorded time represented by each, proportional to the length of tape needed to cover their surface area, thus also varies. While the overall acoustic effect is similar from sphere to sphere as the speed of rotation remains constant, the sound produced by each is distinct, affected by the randomness of its movement. In the artist’s words: “When linear time is wound around a sphere, it is deprived of the relationship between place and time, and thus also loses its meaning (or in other words, causes meaning to arise).”1

Magnetic tape, an obsolete material in our world of digital files, embodies a sense of temporality inherent to any analog recording of sound: we see the physical movement in time that produces the sound, but the recording itself is subject to decay with each playback. Sound Sphere specifically echoes Nam June Paik’s seminal work Random Access (1963), in which the visitor runs an audio head along a web of magnetic tape fixed to the wall. Yagi enacts a reverse archeology of this particular media art history. By constantly exposing this moment, the work endangers the very act of exhibiting what has been found: the continual playing of a sphere gradually erases its protective layer of acrylic lacquer, which in turn necessitates treatment after prolonged exposure.

Yagi’s work nods both to Paik’s playful irreverence and media deconstruction and to John Cage’s chance procedures and notion of indeterminacy. This resonates with more contemporary postminimalist approaches that have complicated the history of Minimalism, in which the form and material of the object and the relationship to its surrounding space embodied the essence of a work. Here, the “perfect” form of the sphere is married to a Fluxus-influenced concept in which the performing object is also the enabler of arbitrary, even noisy sonic experiences.