Robert Rauschenberg had a lifelong interest in technology and never stopped finding new ways to integrate it into his work. It began with some of the early Combines of the 1950s that incorporated radios, electric lights, and clocks, and extended to his decades in printmaking, which involves centuries-old but still complex technologies of reproduction. Late in his career, he was one of the earliest fine artists to work with digital images, buying an Iris printer shortly after they were first released to use in making inkjet transfer paintings. The Iris could immediately print any image, at any size, at a variable color intensity — at that time unprecedented functionality. 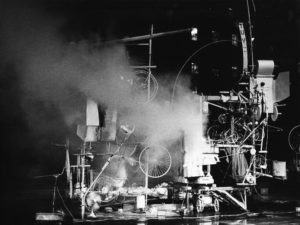 The year 1960 proved a turning point for Rauschenberg’s interest in tech. The Swiss artist Jean Tinguely, with the help of Bell Laboratories research scientist Billy Klüver, produced a large kinetic sculpture titled Homage to New York that was designed to self-destruct with the push of a button. Many New York art world movers and shakers turned out to see what would happen on the fateful March evening when the thing was to go off in the garden of the Museum of Modern Art, and Rauschenberg was among them. He was enamored enough with the concept that he even contributed a piece to the spectacle, a small “mascot” called Money Thrower. 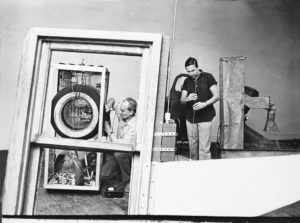 It proved a fortuitous coming-together of personalities, as Rauschenberg also soon enlisted Klüver as a collaborator. They created some of the artist’s most complex works involving technology and kinetics, such as Oracle (1962–65), a sonic sculptural environment, and Soundings (1968), an immersive, voice-activated sound and light installation, both of which involve the audience, utilizing their interaction to help “complete” the work.

“It was in the air in the 1960s, the idea that the arts and all the burgeoning new technological forms could find a synergy. Everyone then was interested in the new, in inventions. It was the time of the space race, and the World of Tomorrow. Rauschenberg relished that way of thinking and living in the world,” says Gary Garrels, SFMOMA Elise S. Haas Senior Curator of Painting and Sculpture. “Going from working with printmaking technicians to working with people with expertise in other kinds of materials, whether it was electricity or computers, was a very natural progression for him.” 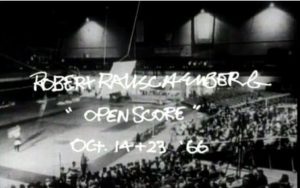 A collaborator and convener by nature, Rauschenberg aspired to connect other artists with technology companies, and so in 1966 he and fellow artist Robert Whitman, together with Klüver and engineer Fred Waldhauer, cofounded the New York–based nonprofit Experiments in Art and Technology (E.A.T.). “E.A.T. was a kind of matchmaking service,” explains Garrels. “An artist would submit a form that stated what their interest was, what materials they wanted to work with, and what problem they were trying to solve, and the organization would match them with particular engineers and scientists.”

The best-remembered event that E.A.T. produced is 9 Evenings: Theatre and Engineering (October 13–23, 1966). It was a series of live performances and enactments, open to the public, featuring an array of artists, choreographers, dancers, scientists, and engineers. By some accounts awesome, by others frustrating (mostly due to varying audience expectations and many technical glitches), 9 Evenings was nonetheless a major moment for the art history books. 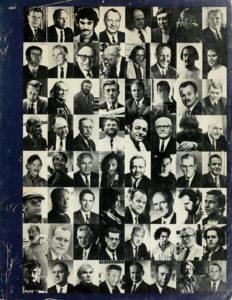 A report on the Art and Technology Program of the Los Angeles County Museum of Art, 1967-1971

Visitors to SFMOMA’s exhibition Rauschenberg: Erasing the Rules will see many examples of the artist’s works involving technology, but no amount of advance reading, or even looking at pictures or videos, will prepare them for Mud Muse (1968–71). Created in collaboration with engineers from Teledyne through the Art & Technology program at the Los Angeles County Museum of Art, Mud Muse is a room-size aluminum-and-glass vat that holds thousands of pounds of mud — not just any mud, but a special recipe made with bentonite, mixed to a specific viscosity that bubbles along, stimulated by pulsing air valves beneath its surface, to a prerecorded soundtrack playing on a nearby 1960s reel-to-reel. Its current tour of New York and San Francisco is the first time it has been seen in the United States in twenty years and its first appearance on the West Coast since 1971.

Garrels remembers seeing Mud Muse in an exhibition in Germany in the 1990s: “It left this indelible impression in my mind. It’s something you have to experience. It’s not just a visual thing. It’s about sound, it’s about kinetics, it’s about your physical relationship to it.” It’s also about smell — not an unpleasant smell at all, just a profoundly earthy and moist one.

Mud Muse has been in the collection of Stockholm’s Moderna Museet since the mid-1970s, and its installation is so complex that only one person knows how to do it. Gunnar Marklund has worked at the Moderna Museet for nineteen years, and personally executes the installation of Mud Muse anytime it’s presented at home or elsewhere. He reports that he’s done it perhaps six or seven times thus far. “It can be many years between installations,” he notes. “The audio equipment and its cabinet are quite old and require maintenance and repair on occasion. And there are sixty-four valves in the bottom of the pool, and they do get clogged; I have to check them every time and clean them as needed.” 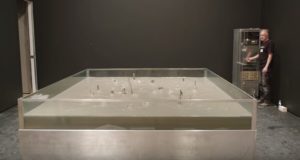 Marklund never talked with Rauschenberg while he was alive, but the Moderna Museet preserves documentation related to the piece, including conversations about it with the artist, who felt it was important to maintain it with minimal upgrades to its mechanical or electronic parts. “We’ll try to keep it working as long as there are tape recorders,” Marklund observes. Occasionally during installation he experiments with different music to activate the bubbling (in New York recently, ABBA). And we know that Rauschenberg also imagined different audio stimuli for it, including traffic noises, police sirens, and, most ambitiously, real-time sounds made by visitors that would be picked up by microphones hanging over the work (an impossible idea at that time, he found out, due to limitations of microphone technology). In the end, he decided that Mud Muse, when officially displayed for the public, would “play itself” in a sort of recursive loop — the audio a recording of the noise the bubbling makes.

Marklund has developed an affection of sorts for the work over the years: “When I started at the Moderna Museet in 1999, there was another man doing my job with Mud Muse. He passed away on a trip to Singapore before he had the chance to tell me how to manage it. So the next time we installed, I had to study the archival papers to learn how it works. It took a long time to get to know the piece. Personally I think it has to do with the space race of the 1960s, the competition between the United States and the USSR to invade the moon, since the bubbling mud looks like a moonscape.

“With every new installation, I learned more and more about it. Today I know it very well, and fully understand what Rauschenberg had in mind for it. I think San Francisco will be the last time I install it. I am too old to go on with this! But before I retire, I’ll of course train another technician.”

Rauschenberg: Erasing the Rules reveals not only the artist’s fascination with art and technology, but also his humor, his dedication to the unexpected, and the surprising results of his many collaborations. “His marvelous sense of playfulness, it never stops,” says Garrels. “It’s always bubbling up throughout all the work. Kind of like Mud Muse.”