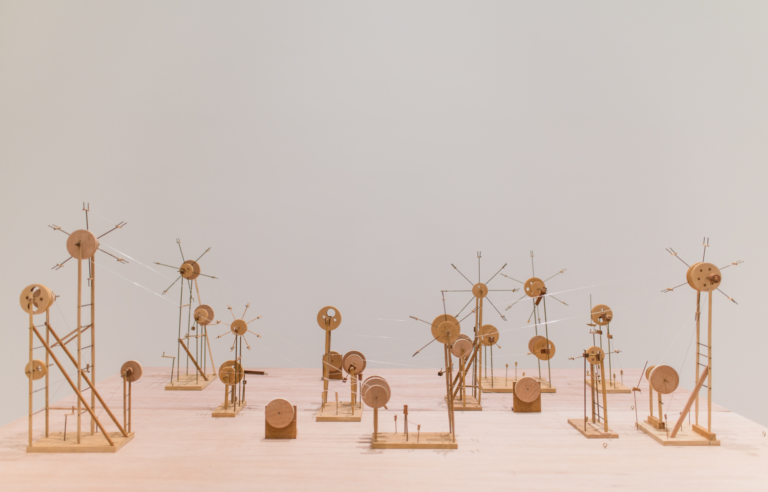 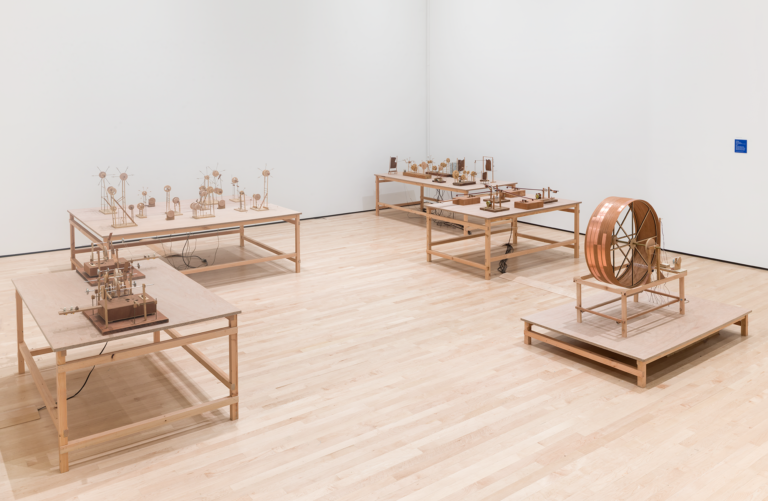 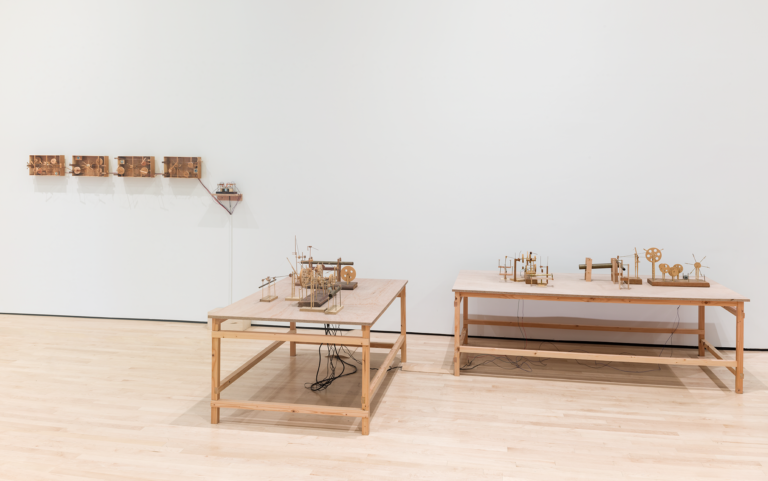 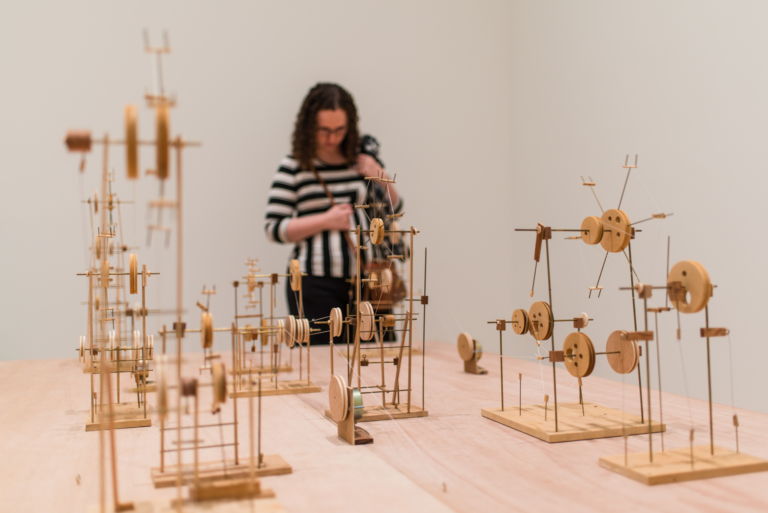 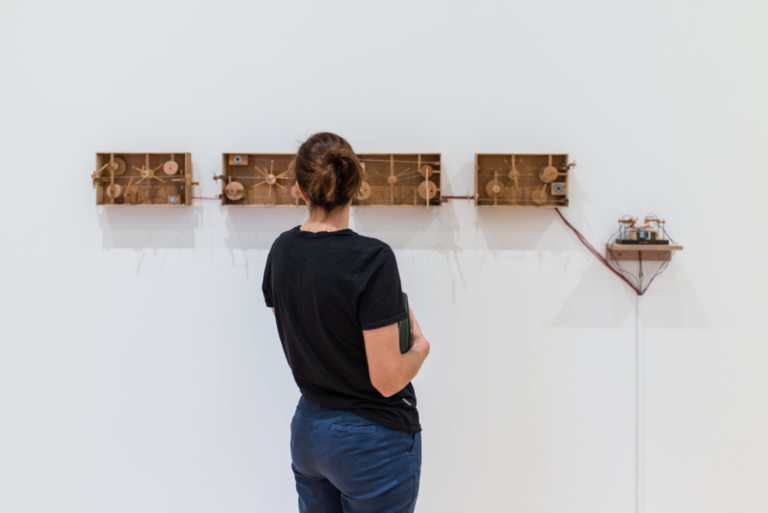 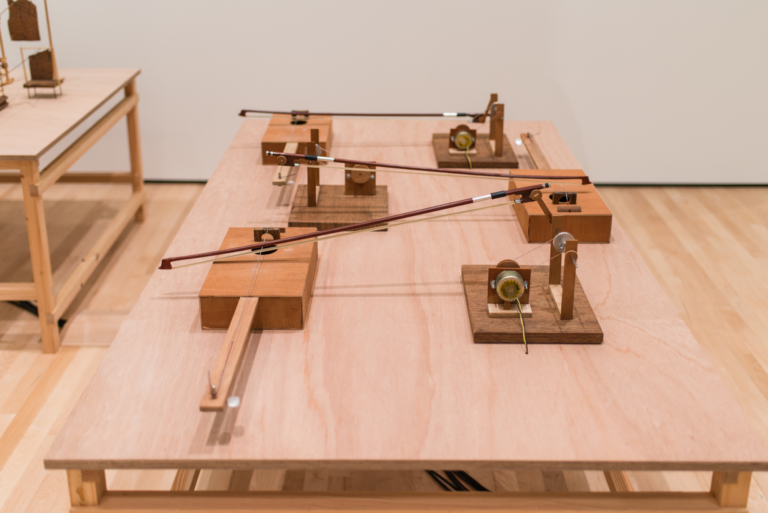 The term music hardly does justice to the poetic processes that unfold when visitors wander among the seven small stages housing Cantilena (2017). Nelson Soares and Marcos Moreira, the two names behind O Grivo, are composers, performers, and professional craftsmen who build, repair, and activate musical instruments and often collaborate with filmmakers on soundtracks. Not unlike the classic foley artist, who uses humble everyday materials to mimic sounds recorded on location during film production, they employ cranks, wheels, cylinders, discs, wires, pulleys, and electrical motors. In other words, they take materials, gadgets, and even parts of instruments out of their original context and reinvent them—here as an imaginary, makeshift orchestra with an analog “conductor.”

The Brazilian duo has been working on the sonic behavior of machine-like sculptures for a number of years. With Cantilena, the sculptures are acoustically arranged as an “orchestra” for the first time. The events that result reference musical performances but shy away from ever becoming a finite composition. Instead, as visitors move around the stages they hear conversations among various groupings of “instruments” (four “strings,” three “sticks,” four “bells,” three “bows/delays,” various “pulleys,” and two “wires”). Classic orchestration movements such as solos, duos, tuttis, and so on are achieved through strictly mechanical means, with analog timers serving as the conductors and graphic notation of this low-fi orchestra.

It is a complex series of simple “open source” operations that unfold over time in a careful spatial arrangement of sonic gestures. The audience can scrutinize up close the visible mechanics of what might be compared to an open prepared pianola—activated not by a score on perforated paper in this case, but rather through the timers’ electrical pulses. As the writer Victor da Rosa notes, the work enacts an “intense relationship between more advanced technologies and more precarious ways of producing music.”1 The dream of automated performers, today so present in the resurgence of robotic machines, is coupled with an urge to listen—not unlike Pauline Oliveros’s concept of deep listening, or awareness to sounds in an environment—and an autopoetic system offering a performative laboratory situation in which each instrument embodies a temporary process and can be rewired and rebuilt in many other configurations.

O Grivo also brings this open-ended concept of polyrhythmic environments and fragile mechanical assemblages to live performances onstage, where the analog timer is replaced with Soares and Moreira’s presence and sensitivity, restructuring the soundscape at the intersection of electronic and acoustic sound. In every musical installation or performance, the visual is a consequence of the sound and musical functionality. Each piece is essentially a form of dialogue in action. It seems only appropriate to speak of the repetitions, delays, and gentle differences embodied in these delicate machines using more sensuous language: “After all, what are the sounds that lie asleep within things? . . . the hinges that squeak at the weight of opening and closing doors, the rustle of clothes in closets . . . the whistles that toot randomly, with no connection to any known song . . . the near-silent but still-audible moans. Everything sings, everything has its rib cage, its density, its way of reacting to the cold, snapping as it contracts.”2

Strings (four boxes): Pizzicatos are randomly combined, creating a polyrhythmia. The enormous possibilities of rhythmic combinations cause a kind of suspension, as if we were looking for the repetition start point.

Sticks (three machines): The metal sticks work like bows. Long and continuous sounds. However, the sounds are not irregular in terms of pitch, color/timbre, and intensity. The combinations sound like glissando voice duets and trios. There is a rusty echo in both the sound and the kinetic sculpture.

Bells (four machines): Brass tubes function as bells, with a sharp attack and a very long reverb. The idea again is to create a polyrhythmic environment. But this time in a slow tempo that lets sound’s reverberation create different intervals.

Bows/Delay (three machines): String instruments are activated by bows. The velocity and timbral feature are almost the same. The difference is the strings’ tuning. This difference and the combinations, generated by a timer, induce a hypnotic ambience. The sensation caused by the circular movement of the bows is similar to the delay’s effects.

Pulleys (various interconnected small machines): The sounds are produced by the mechanism movement itself. The friction of the axes produces gentle squeaks and creaks. In the first approach it’s difficult to recognize each sound source, which pulley is producing this or that wheezing.

Wire (two machines): The percussion of metal wires against violin strings is the sound production method. The tempo is slow and invites the listener to deeply enjoy each sound. The combinations of the sounds produced by these two machines are very simple and configure a crystalline form.

Excerpted from an email to Rudolf Frieling, March 18, 2017