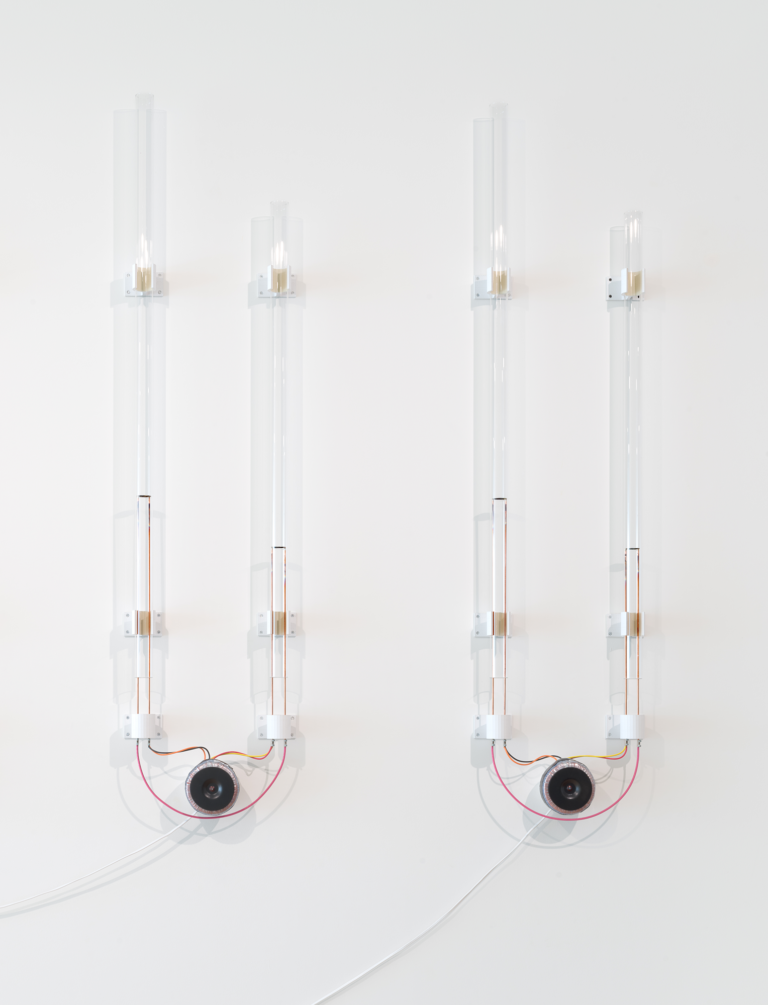 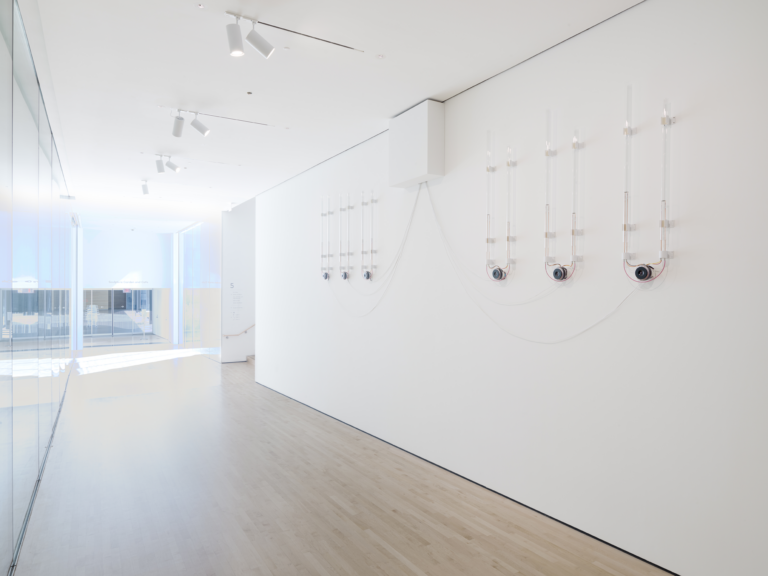 Air rushes upward, creating tones, as it becomes heated in the array of twelve glass tubes in for de forest (2016–17). Paul DeMarinis has tuned the wall-mounted pairs of tubes to roughly neutral thirds, an interval he describes as rich in natural, cultural, and industrial associations. Overlapping activations of small grids that briefly glow with life produce beat frequencies in the space between the elements.1 The sounds of the ensemble shimmer and fade with a kinetic quality as they spread through the surrounding space. DeMarinis first experimented with the spatial presentation of electronic media as artworks, rather than instruments or tools, in the 1970s. These early pieces anticipated his later interactive and sound-based installations. For the premiere of this work as part of Soundtracks, the installation is timed to sound on a regular schedule for varying durations lasting a few minutes each. The long gallery space, lined on the opposite side by a wall of glass windows, acts as a resonating chamber.2

The title nods to American inventor Lee de Forest (1873–1961), whose most famous invention was the Audion, a vacuum-tube amplification device that was foundational for many applications, notably film soundtracks and radio broadcasting.3 The artist notes, “De Forest’s invention presents us with an intersection in a moment in time, 1906, the age of electric lighting, when the flames of candles and gas jets were everywhere being locked up in glass bottles, and at the same time all the words and messages running through wires were leaking out into Maxwellian space as communication became radiant.”4 Radio connected vast distances around the world and ushered political news into the domestic sphere.

DeMarinis has reflected on the role of radio as a social and technological medium in his practice. Several works employ gas flames to address how radio in particular reconfigured cultural perceptions of the relationship between speech and sound. While sitting around the fire with friends one evening in 1975, DeMarinis discovered that the gas jet was momentarily transmitting a radio broadcast. Decades later, after investigating this phenomenon further, he would implement the use of flames moving in response to sound waves—from the “speaking flames” of recordings of political speeches by World War II–era dictators in Firebirds (2004) to the flames that tremble with the heartbeat-like pulse produced by large spherical glass resonators in Helmholtz (DUO) (2015). Working primarily across sculpture, installation, and performance, the artist undertakes a research-based media archaeology, often tracing ties between the known and forgotten discoveries of scientists and inventors from different centuries.