Jacolby Satterwhite is taking SFMOMA visitors inside his head, literally. He calls it a virtual reality (VR) performance: wearing Oculus goggles and in costume, he will perform his own choreographed movements while the VR images he sees are live-stream projected onto the walls of the museum’s White Box—all to the sounds of the album he’s producing in honor of and in collaboration with his mother.

“It’s an experiment in delivering a cinematic experience through my lens,” he says. “People will see the narrative I’ve been animating to accompany a new album I’ve been working on, which they’ll also be listening to. The film is rendered in two ways: in 360 degrees and on a traditional two-dimensional screen.” 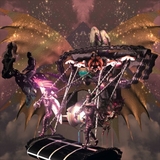 Listen to Birds of Paradise, by Satterwhite, his mother, and Nick Weiss

Expanding experience in the museum is what the artist is known for. He is also known for his long-standing creative collaborations with his mother, Patricia, which in the past have used her vast archive of drawings as starting points for new visual creations in the digital realm. This is the first time that the starting point of their collaboration has been music—specifically the 155 a cappella songs that Patricia recorded on cassettes in the late 1990s.

It’s also Satterwhite’s first time collaborating with Nick Weiss, of the electronic music duo Teengirl Fantasy. “I’d wanted to work with Nick for years,” says Satterwhite, “ever since I discovered Teengirl Fantasy in 2010, and this SFMOMA commission was the instigator to finally make it happen. He’s a master at electronic music production. I could tell that we have similar taste, and that he’d be sonically aligned with what I knew my mother’s songs could be, or were trying to be.”

Patricia’s original songs blend new age, R&B, country, gospel, and folk. “The first step was to digitize them all,” recalls Satterwhite. “Then Nick and I sifted through them, making our selections by instinct, based on what I was thinking about visually. The songs were made in the past, and we built their form based on where I am in the present. We created a palette, in a sense, with synthesizers, keyboard instrumentation, and so on, putting in up to ten hours of studio time on each track.” 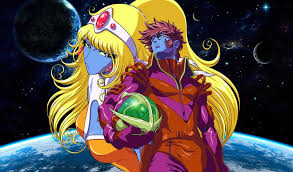 The new tracks maintain the original lyrics and melodies and incorporate elements of electronic house, noise, and deconstructed club music. The inspirations are wide-ranging, although Satterwhite points specifically to Daft Punk and Leiji Matsumoto’s Japanime-influenced action-adventure film Interstella 5555 (2003), which is set to a disco electronic rock album, as a seminal influence that rocked his world as a teenager. 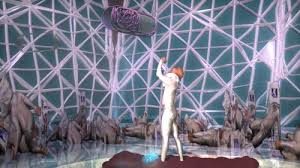 The accompanying visuals are created using Maya, a software application for animation, modeling, and simulation. Trained as a painter, Satterwhite has been working in new media since 2008 and loves the possibilities it affords. In past works such as Reifying Desire 1–6 (2012–14), which will be screened as part of his long weekend at SFMOMA on November 17–20, animation allowed him to double, triple, even infinitely multiply his own avatar in his visual creations. This new work also features him in multiples, but the motivation, he says, is more about making the motions of the characters support the story being told through the album’s sequence of twelve music tracks.

The work’s visual component features up to sixty different cast members, some friends of the artist, some complete strangers who create “a palette of people, software, props, costumes, language, and drawing.” On several occasions Satterwhite threw parties with a green screen and recorded people’s movements for later use.

“I approached each cast member as a kind of archive to mine,” Satterwhite reflects. “What is their personal mythology? Their background? I use that, but in the end their existence in the work is passive, not so much about them as a character per se. They’re like music notes. They’re orchestral—they’re accents, or markers, of a certain kind of visual ballet that I’m trying to build. Like ballerinas, I’m making them act out a language. But of course with a different ebb and flow than a ballet piece.”

The new album will eventually be released in some form (exactly what it will look like has yet to be determined, although the artist wants it to be both collectible for museums and accessible to the public). The working title, En Plein Air, will likely not stick, but Satterwhite says it’s appropriate, given that the work is a tongue-in-cheek response to painting: “I’m making abbreviated marks, interpreting what’s in front of me, whether that is files on hard drive, mythologies, drawings, performers, or mediums. Gender, politics, race, sexuality. Outsider art, painting, dance, fashion, new media, Afro pop, techno. I’m weaving them together. Building a palette. Observing. I’m a millennial—I’m not a fan of that word, but, it gets at the phenomenon of people my age as melting pots. We’re creative schizophrenics.”

Visitors on November 17–20 will experience the album as it has developed up to that moment. “I don’t usually show work in progress,” admits Satterwhite, “but it will be healthy, I’m sure! I’m preparing my brain. I know that when I go home to New York afterward, I’ll be able to wrap it up well. And this is only the beginning of my making music albums. After all, I’ve got 155 songs to work with.”

Lindsey Westbrook is a freelance editor and writer specializing in art, architecture, and design. Her clients include SFMOMA, Istanbul Modern, UC Press, Princeton Architectural Press, Kunsthalle Basel, the Museum of Contemporary Art Detroit, the Felix Gonzalez-Torres Foundation, and many others.
Read more