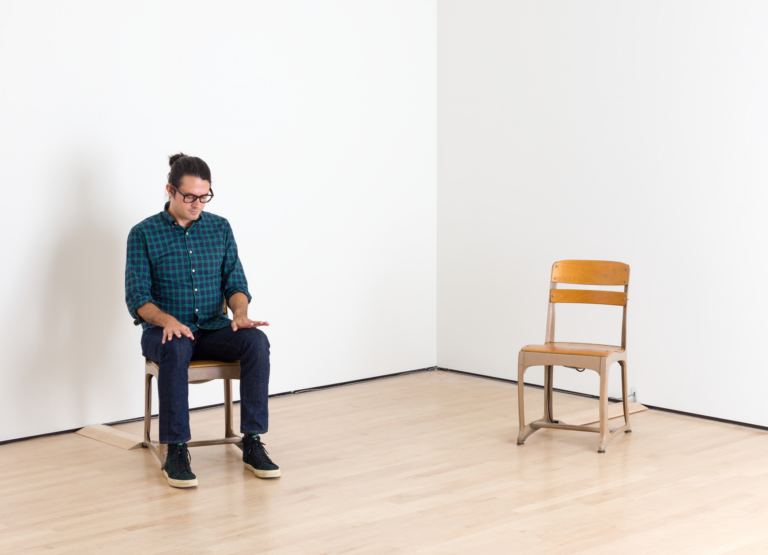 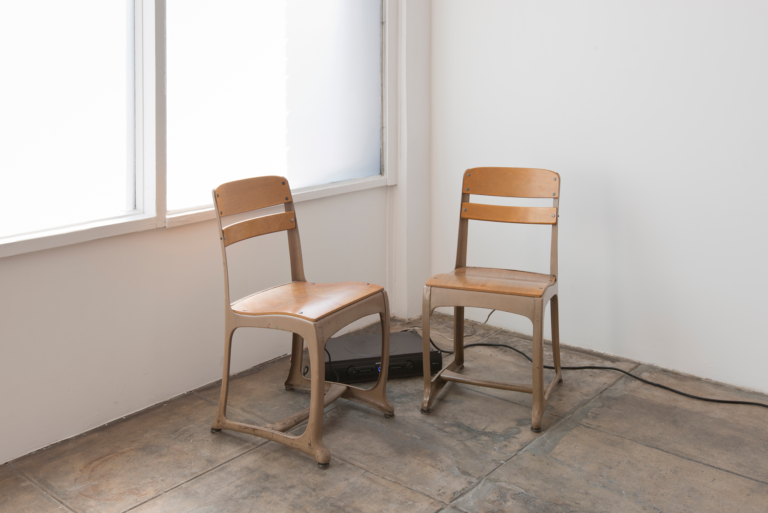 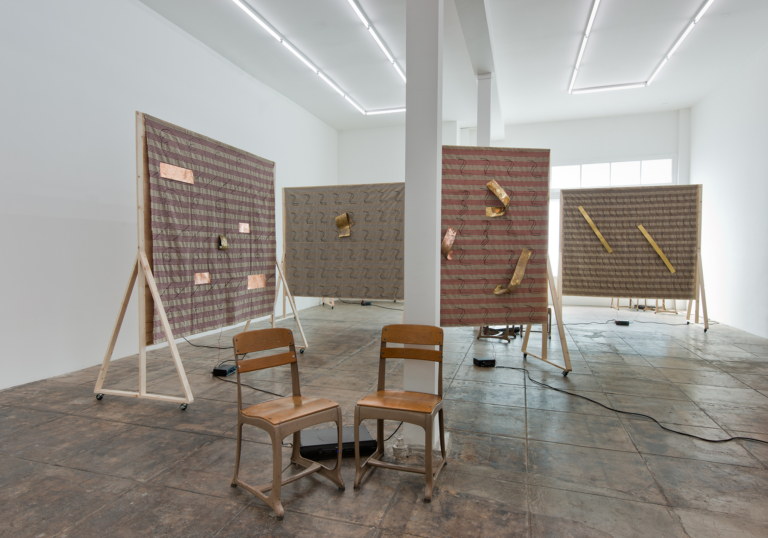 Vibrations conducted through a person’s bones produce the uncanny sensation of low sounds emanating from within the body. The New York–based artist Sergei Tcherepnin draws on this effect in Stereo Classroom Chairs (2015), mounting a transducer to the underside of each wooden seat on which visitors are invited to sit. When not attached, a transducer plays sounds quietly, at a level that is almost inaudible. When its surface touches another object, however, the material characteristics of that object filter the sounds in various ways. Here, Tcherepnin’s audio composition travels through the body of each sitter with a physical intensity. The chair amplifies the composition, while the sitter acts as the filter, amplifying low-frequency sounds and muffling higher frequencies.

At SFMOMA, Stereo Classroom Chairs is situated at a natural place of rest, with views of the surrounding gallery and the seventh-floor outdoor terrace. Tcherepnin adapted the composition to play continuously. Sets of these found chairs, chosen in part for their pedagogical associations, were originally featured in the artist’s exhibition Body Bound Notations at Overduin & Co. in Los Angeles in 2015, facing movable screens reminiscent of classroom chalkboards. A theatrical framing device, these freestanding boards were painted with abstracted musical notations, over which Tcherepnin attached sculpted, bendable brass and copper forms with transducers applied to them. Visitors could manipulate the metal to transform the sounds they produced. A hybrid of theater, sound, painting, and sculpture, the installation invited the audience to develop a “score” for handling these amplified objects.

Transducers have become ubiquitous in sound art and experimental music in recent years, since such pioneering examples as David Tudor’s Rainforest IV (1973), comprising an ecosystem of heterogeneous objects transformed into an ensemble of loudspeakers, and Laurie Anderson’s The Handphone Table (1978), in which recorded sounds become audible to listeners when they place their elbows in depressions on the table surface and cover their ears. Trained as a composer, Tcherepnin became interested in the physicality of sound and psychoacoustic phenomena through his studies at Bard College with the composer Maryanne Amacher and the sound engineer Bob Bielecki. In Amacher’s “ear tone music” or “combination tones,” the ears themselves produce audible sound.1

Tcherepnin has incorporated the functional, hard surfaces of objects associated with the public sphere, from a wood subway bench to security mirrors, in previous sculptural works. He has also channeled prerecorded sound compositions through simple and raw materials such as brass, copper, and wood in performances and paintings. In each case, participants experience the tactility of sound in an intimate way. The artist observes, “These objects don’t give immediate results. They allow you to learn how to listen differently, or change your way of hearing by deeply engaging with the work through touching. There are subtle effects, and the work is not dependent on interaction, but once you do [interact with the work], it brings it to life.”2