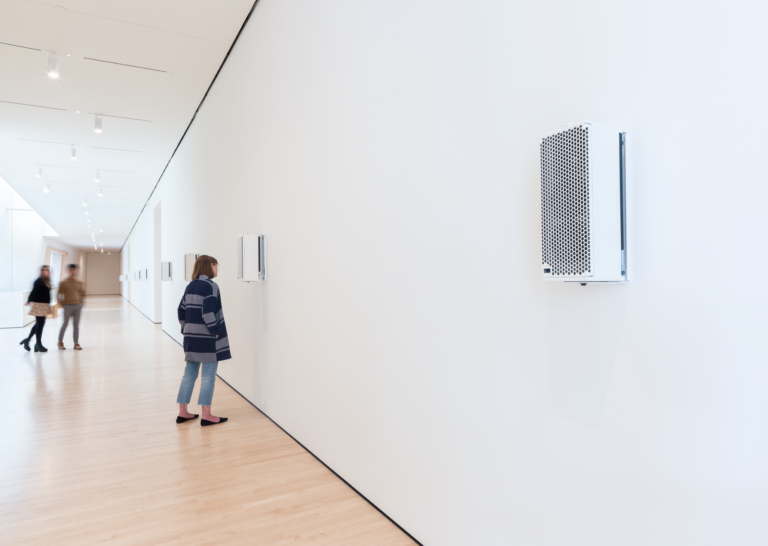 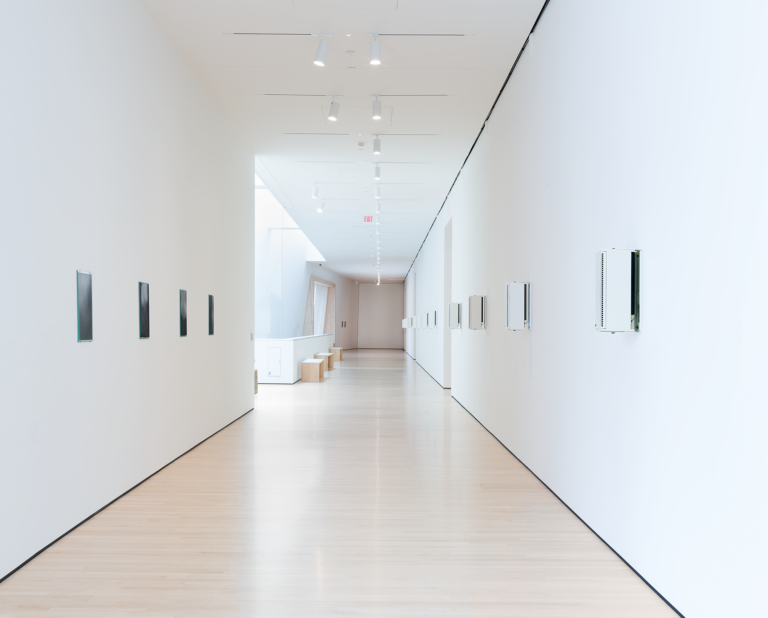 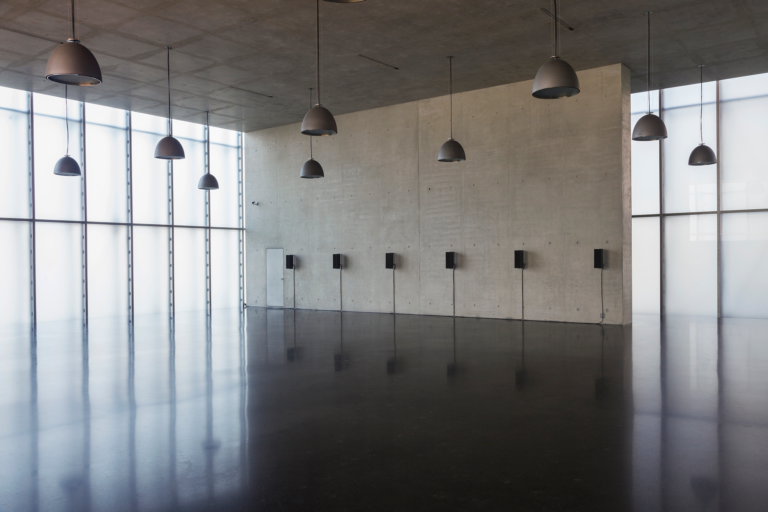 The appearance of one’s breath fogging a plate of glass is a subtle reminder of being alive. In Soundtracks, a series of intimate photographs by the Scottish artist Susan Philipsz makes visible the forms of residue from her own breath. These images, Vernebelt II–VII (2016), are paired with Night and Fog (Clarinet) (2016), a sound installation in which moments of presence and absence are marked through the evocative use of a wind instrument. The titles of the two works allude to the Nacht und Nebel (Night and Fog) directive issued by Adolf Hitler in 1941, which instructed German forces to imprison or kill alleged political activists and members of the resistance without disclosing their whereabouts to relatives. Vernebelt became an expression to describe the obscured fate of the abducted.

Philipsz’s installation draws on the score from Alain Resnais’s film Nuit et brouillard (Night and Fog, 1956), the first documentary about the Nazi concentration camps. Resnais invited Austrian composer Hanns Eisler to contribute the original music and French poet Jean Cayrol to write the narration.1 Cayrol had been a Nacht und Nebel prisoner and had authored “Poems of Night and Fog” in 1945. Eisler, who was Jewish, had gone into exile after his work was banned by the Nazis in 1933, had worked in New York and Hollywood, and in 1948 had returned to Europe, having been deported from the United States as an accused communist sympathizer.

Philipsz’s Night and Fog, commissioned by the Kunsthaus Bregenz in Austria in 2016, continues the artist’s interest in Eisler’s story. Eisler composed in the twelve-tone technique of his mentor, Arnold Schönberg. Philipsz adapted his music for Resnais’s film by recording each of the twelve tones of an instrument—bass clarinet, clarinet, horns, and violin—separately and distributing the recordings over different speakers (twelve for each instrument). At the Kunsthaus Bregenz, she assigned a particular instrument to each floor. As visitors moved from level to level, the sounds merged in the stairwells, but experiencing the music in its totality remained elusive. Further, the steep stairwells—where her Vernebelt photographs were presented—recalled the timbered slope of the Jewish cemetery in the nearby town of Hohenems. In that contemplative and historically significant space, the flute part of Eisler’s composition played on outdoor speakers.2 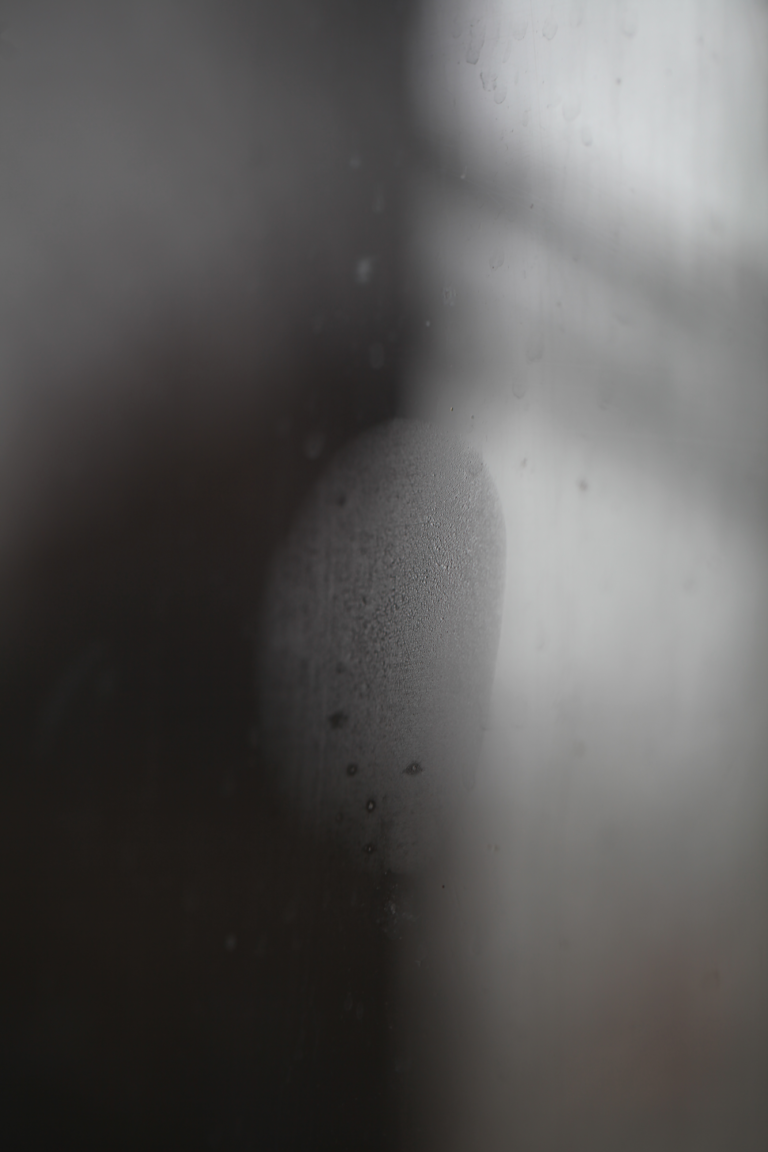 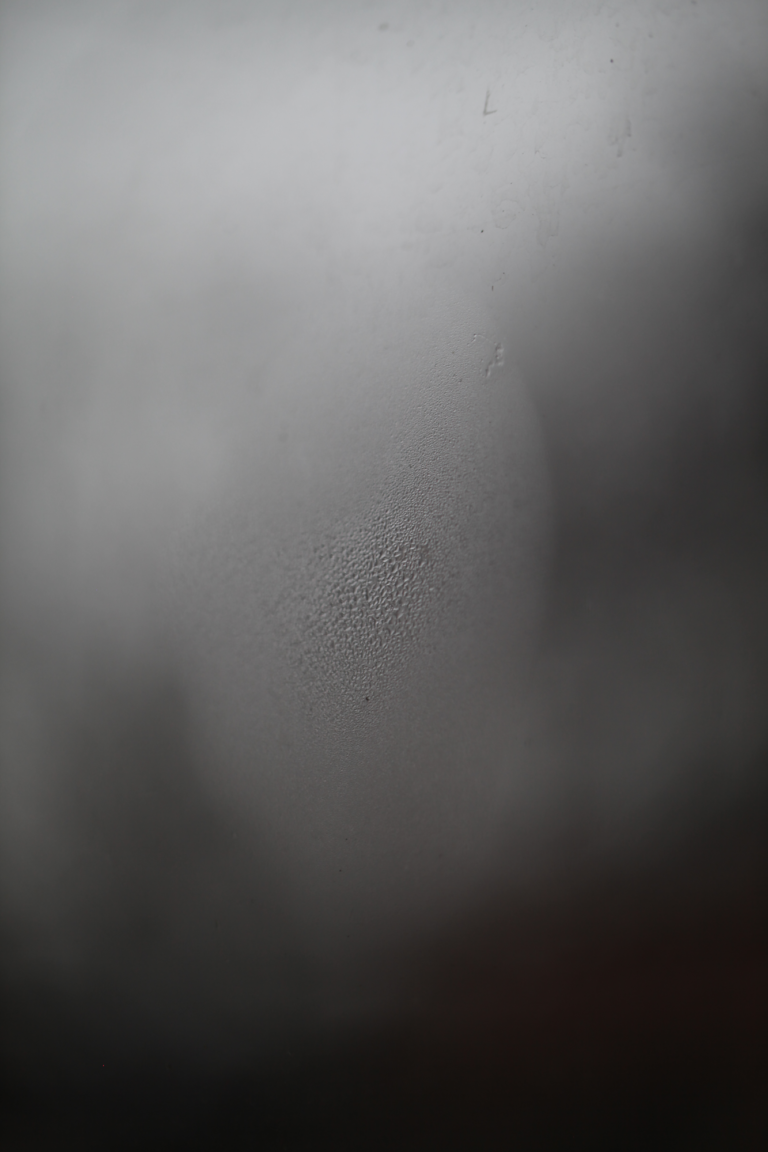 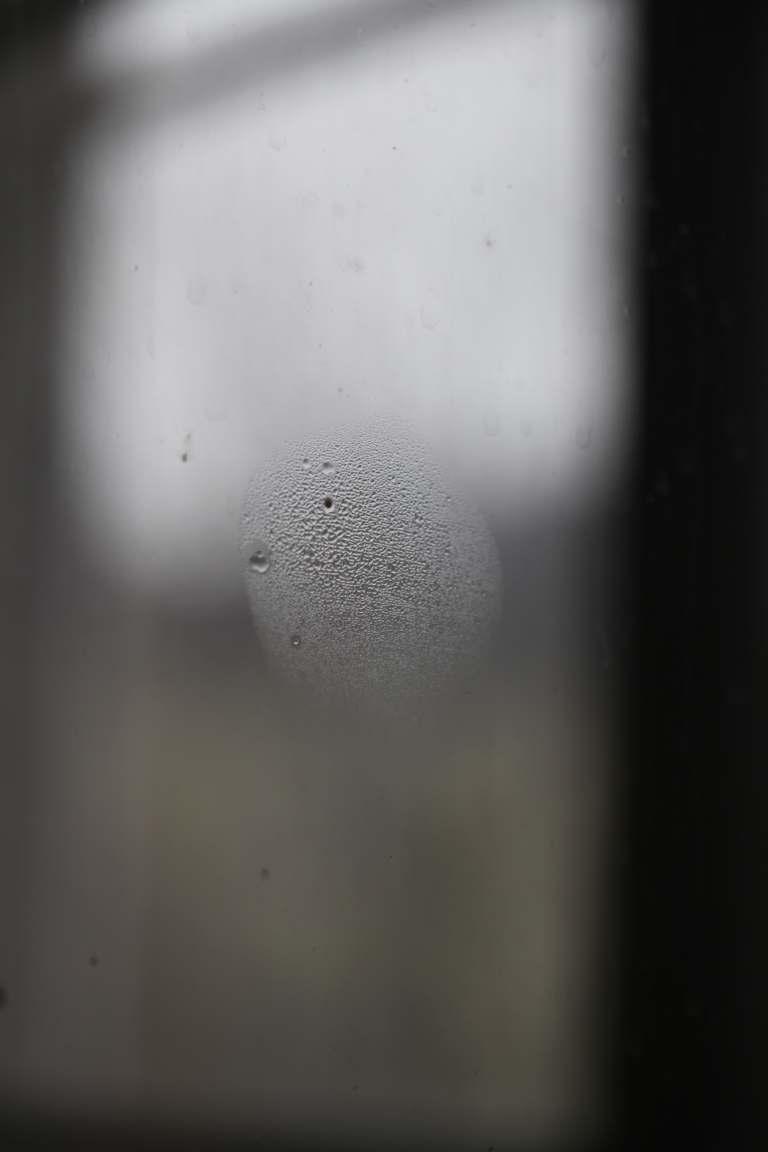 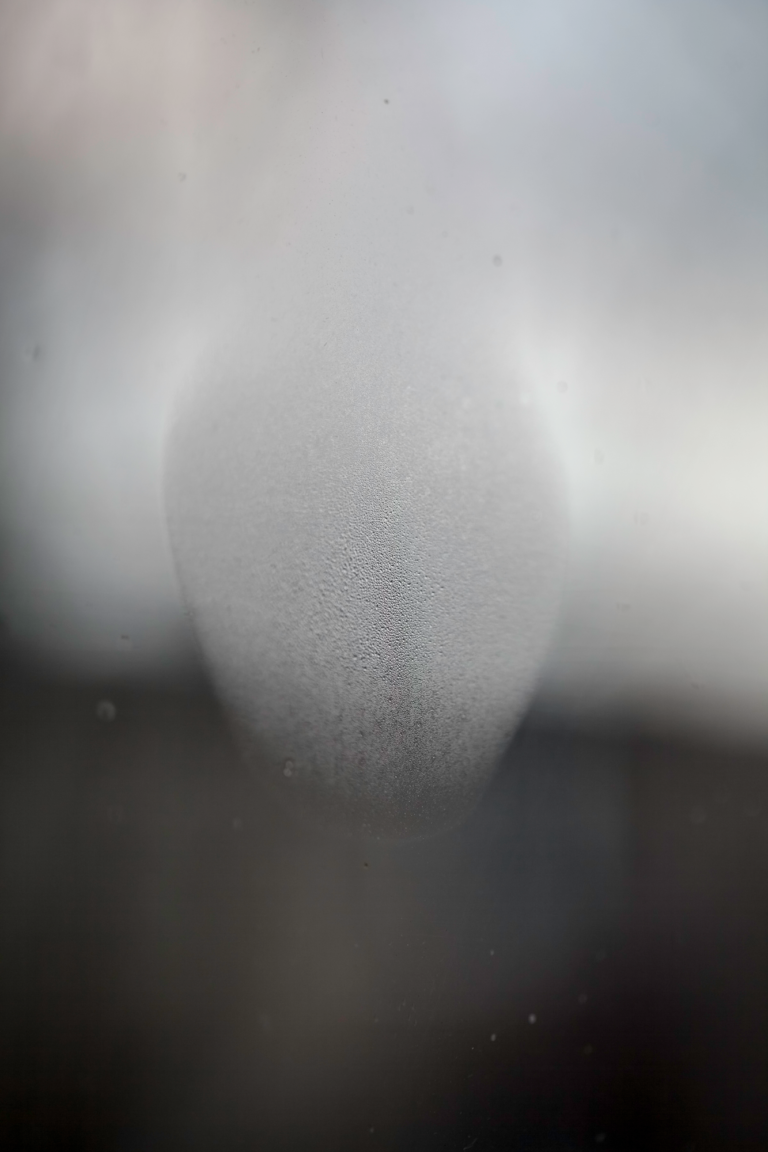 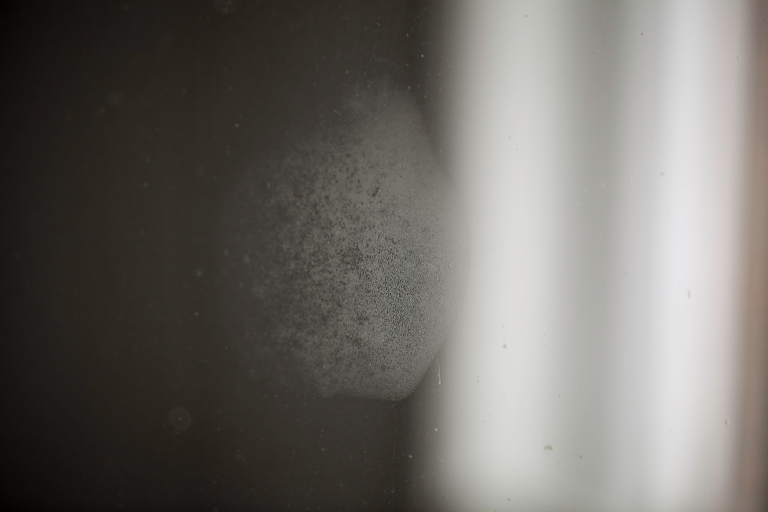 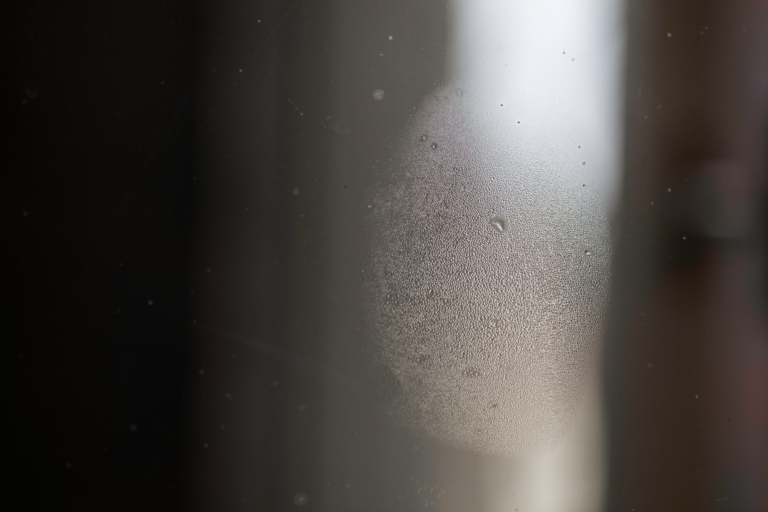 At SFMOMA, Philipsz has chosen to present the “voice” of the clarinet from Night and Fog, installing the twelve speakers in a long gallery with views onto the shifting weather patterns over the city skyline. Philipsz has often developed works in relation to the spatial features or history of a site. Like the Kunsthaus Bregenz, SFMOMA’s building is inspired in part by fog: Peter Zumthor’s glass-shingled building in Bregenz absorbs the changing light of the sky and the haze shrouding Lake Constance, while Snøhetta’s new east facade in San Francisco is covered in fiber-reinforced polymer panels that form rippled patterns influenced by the fog and water of the nearby bay. The subject matter of Night and Fog resonates with the ongoing presentation in the adjacent galleries, highlighting German art after 1960.

For Philipsz, the atmospheric rendition of Eisler’s music alludes to fog and to breathing. There are long gaps and pauses between the lone tones where the other instruments should be. Excluding the powerful visuals and narration of Resnais’s original film, she deconstructs Eisler’s soundtrack to draw from its structure the emotionally resonant spaces between sounds.

Susan Philipsz’s Night and Fog (Clarinet) (2016), recorded from a stationary point at the center of the gallery, SFMOMA, 2017