We Go Way Back: Stanlee Gatti on the Modern Ball and More

by Lindsey Westbrook, May 2016

Stanlee Gatti and SFMOMA go way back, and in this interview he describes his long and affectionate history with the museum. Gatti is an event designer who has operated his firm in this city since 1985. He has designed the Modern Ball every year since its inception, as well as more than a hundred events for the city of San Francisco (including the mayoral inaugurations for Willie Brown and Gavin Newsom), the Black and White Ball, numerous Symphony season openings, and events honoring everyone from Mikhail Gorbachev to Elton John to Kanye and Kim.

SFMOMA: You and SFMOMA go way, way back. What was your first encounter with the museum?

Stanlee Gatti: I came to San Francisco in 1978, and I remember one day not long after, I was in a cab on Divisadero, and I saw a license plate that said “SFMOMA.” I said, “Follow that car!” When the car parked (at the museum, as it turned out) I told the woman driving, “Wow, your plate is so cool.” Unsurprisingly, it turns out she was one of the higher-ups, and she told me I should buy a membership. I think it cost around six dollars. And I’ve been continuously involved with the museum ever since. The first show I saw there was Judy Chicago’s The Dinner Party, when she had just made it.

SFMOMA: What was the first event you designed for us?

SG: I believe it was director Henry Hopkins’s farewell party, at the old building on Van Ness, in 1986.

SFMOMA: And now it’s 2016, and you’re planning the latest Modern Ball. Not only have you designed it every year since the beginning, but you were involved in the conceptualization of it, is that right?

SG: The Modern Ball was the brainchild of Elaine McKeon (who was at that time chair of the board) and me. We asked Helen Schwab to lead it that first year, 2004, knowing how dynamic she is. 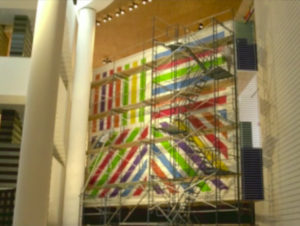 Watch a time-lapse of a Sol LeWitt Wall Drawing installation

SFMOMA: How has your concept for it evolved from year to year?

SG: Every year is different, but there’s always been the influence of an artist. The first year was inspired by the Sol LeWitt mural that had just been installed in the Botta lobby. The tent had stripes. The next year was all Andy Warhol. We lined everything in silver foil to feel like The Factory. The tablecloths and chair covers were printed with Campbell’s soup cans. For the supper club, I blew up Warhol’s photo booth images and covered an entire wall. Everything else was done in Astroturf, including the furniture. That was an ode to his lost movie, Grass. Apparently it was a minute and a half of just looking at a section of grass. At the very end, somebody plows a lawn mower through it.

SFMOMA: And the film is lost?

SG: They can’t find the original, but a lot of people saw it, so it certainly existed. The next year was Picasso. And then a kind of combination of Dan Flavin and Takashi Murakami. Call it “Murakamiesque.” It’s never about directly taking a piece of art and emulating it. It’s more about taking inspiration from a particular artistic philosophy or approach.

SFMOMA: Can you say anything about this year’s design, or are you sworn to secrecy?

SG: This year, for the first time, we’re holding the Modern Ball inside the building rather than in a tent. There’s no particular artist we’re honoring. We’re taking foil bubble wrap and wrapping everything with it: the tables, the chairs.

SFMOMA: So it’s a reference to the museum moving into the new space! Or maybe I’m being too literal. Would you say you conceive of the Modern Balls—or any event you design regularly for a cultural institution—as a series? Do they evolve? Is each building on the last?

SG: It’s a big question, but ultimately I’d say no. I view each commission differently. I never think about anything other than what would be cool to create, and is appropriate for the organization, and has meaning for the time in which we’re doing it. I create for a purpose. It’s like an installation.

SFMOMA: What is your process? Say it’s time to start planning the next Modern Ball. What is the first thing you do or think about?

SG: Truthfully, I don’t need to talk things out much. Unlike many people, I don’t need to have lots of meetings. And I don’t need a lot of lead time, actually. It just comes so naturally to me. It’s second nature. I suppose that means I don’t have control over it. It’s a muse kind of thing. I was one of those kids who never studied, even for a test.

The Fisher Collection at SFMOMA

SFMOMA: Given your long history of spending time in SFMOMA, do you have a particular work in the collection you’ve missed and are looking forward to seeing again when we reopen? Just curious.

SG: No, I don’t. But let me explain: The museum has collected in depth on some artists and movements. And now with the addition of the Fisher Collection and all the other acquisitions, we have certain artists in even more depth. Ellsworth Kelly is an important example. Gerhard Richter. That’s what’s satisfying about visiting the museum. It’s different when you’re dealing with, say, an incredibly rare Vincent van Gogh like Starry Night or Pablo Picasso’s Demoiselles d’Avignon.

SFMOMA: I’ve never thought about that distinction, but I’d agree with you. It’s about the holistic experience.

SG: What I’m very excited about are the galleries. They have been done so thoughtfully, as opposed to other museums that have recently opened. The SFMOMA presentation is highly sophisticated. Here, we have small, intimate galleries showing a particular artist. Sometimes the works are arranged in chronological order so we can watch the progression, or simply curated in a way that gets across something important. For instance, in one gallery devoted to Ellsworth Kelly, there’s only four pieces in the room. And you walk in there and immediately think, ah, this makes me feel so good, such a great juxtaposition. The way they are hung is perfect.

I think I felt that in pretty much every gallery I’ve seen. Even spaces that have a lot of objects—for instance the Alexander Calder gallery—are still so thoughtfully executed. We’re not a museum that tries to show off, we’re a museum that’s trying to show the art in the very best way possible. I suppose this has come a long way from answering the question. Is there anything that I miss? I miss the museum, truthfully.

SG: I’ve missed being able to go there because it’s a refuge, a sanctuary. You know, when you miss a person, you miss individual little things about them, sure, but really you miss the whole person. And now we have this incredible building. I also think the integration of the old building and the new building is great.

SFMOMA: As long as we’re in your studio, we should do a walkabout. Your office has some amazing objects and artworks in it. What’s that green “centerpiece” sign?

SG: That’s the centerpiece from the first Modern Ball. Helen Schwab was telling me, “Now Stan, I don’t want this to be over the top. I don’t want loads of flowers.” I said, “Fine, I’m just going to write ‘centerpiece’ on a piece of paper and put it in the middle of the table.” And the moment I said it, I thought, hmm, that’s a good idea. We made them in the various colors of the LeWitt murals.

SFMOMA: You have so many themed collections of objects.

SG: They give me ideas for larger environments. This arrangement of oil cans and miniature buildings, for instance, speaks to my thing about skylines.

SFMOMA: On a typical week, how many hours are you here in the studio?

SG: A lot. I’m always running all over the place, but this is home base. The firm doesn’t do much traveling anymore. We used to, but now I just want to be in San Francisco. It’s the city I love. If it’s an event for a San Franciscan, I’ll travel and do the event elsewhere. But truthfully, do I want to go to Abu Dhabi all the time? No.

SFMOMA: In a parallel universe, if you had some other career, what would it be?

SG: Well, I love moving pictures. I also love music. I’ve been through so many incarnations in this one lifetime already. When I was a kid, I was a dancer. And then I became a musician, and then became fully obsessed with the visual arts. And then I landed this gig, which provides me with the stimulation and opportunity to constantly create, but in a way that I don’t have to hold on to. It’s a very passing thing.

SFMOMA: So you enjoy the ephemerality of event design. It sounds like the opposite of being an architect.

SG: It’s the opposite of being an architect, or even a painter or a sculptor. We do a design and it’s great and I get excited about it, but I have never once regretted anything being taken down. I had the joy of creating it, and that was what matters.