In this review of the Solomon R. Guggenheim Museum’s 1963 exhibition Six Painters and the Object, art historian Barbara Rose calls out Collection as “possibly the best painting in the show.” (See reference to Rauschenberg’s “painting with collage elements of 1953–54” on first page. At the time, Collection was untitled and dated 1953–54; exhibition documentation confirms that it was the only Rauschenberg work in the show with this date.) Rose disputes the notion that Rauschenberg and Jasper Johns (b. 1930) are Pop artists, instead situating them as firmly in alignment with and responding to Abstract Expressionism. In describing Rauschenberg and Johns as bridge figures whose work links Abstract Expressionism and Pop art, Rose offers one of the first articulations of what has become the prevailing art historical positioning of these two artists.

Pop Art at the Guggenheim

In the midst of the teapot tempest “pop art” has created in New York this season, Lawrence Alloway, Curator of the Guggenheim Museum, has organized a modest, unassuming, historically-minded show he modestly calls “Six Painters and the Object”. The paintings, by such now celebrated object painters as Rauschenberg, Johns, Lichtenstein, Dine, Rosenquist and Warhol, seem almost to be seeking sanctuary on the Guggenheim’s hallowed ground from the sensational press which pursues them. The thoroughly documented catalog, in listing instances in which artists have been inspired by motifs from popular sources in the past, relates pop art to older painting in a misleading way. In the past, when an artist like Courbet or van Gogh appropriated material from popular culture, it was with the intent of reaching a larger public—in fact of producing a kind of elevated popular art. Pop art in America had no such intention; it was made for the same exclusive and limited public as abstract art. That it has filtered down to the mass public, mostly by way of the mass media, and that it does have popular appeal, is irony to the third power. The public loves it because it is intelligible in everyday terms; the cognoscenti resent it and fail to see it as abstract art for virtually the same reason, although it uses the conventions of abstract rather than representational art.

The works have been selected with care. One bay, enough space to show five or six paintings, is devoted to each painter. By excluding lesser “pop artists”, Alloway has assembled a much handsomer and more substantial show than the one currently on view in Washington. In general, he has chosen paintings that give a fair idea of each painter’s variety and range. The only exception I would take to the selection is to wonder why no recent works by Jasper Johns were included. On the one hand his five paintings, including the famous Green Target and White Flag, are perhaps the strongest single body of work in the show, but on the other, one suspects Johns was the only artist not to be represented with a recent work because it is a fashionable position to assume only his early nark counts.

For me, the Guggenheim exhibition brought out more clearly than ever the distance that separates Johns and Rauschenberg from the so-called “pop artists”, in whose company they increasingly find themselves. I think it is not as inappropriate to talk of them in the same breath as it is to associate them with “pop art”, which has a lot to do with them, but with which they have nothing to do. They are like the inventors of the signs of a language they do not speak. I haven’t seen their earlier work side by side since the “Sixteen Americans” show in 1959, and the juxtaposition suggests that what they share—and what sets them apart from other artists—is a unique relationship to abstract expressionism.

The earliest, and possibly the best painting in the show, Rauschenberg’s extravagant, complex and highly-charged painting with collage elements of 1953 – 54. When this painting was done, fewer choices were open to the young painter of original mind who would not dog de Kooning’s footsteps, as most of the other talented younger painters were doing. At that time the technique of abstract expressionism was not as exhausted as its content. By 1955, when Johns did Tango and the large Green Target, the situation in New York was something like that in Florence in 1520, when all the problems posed by High Renaissance painting had been solved, but lip-service was still being paid to the outworn vocabulary. Both 1520 and 1955 were “crisis” moments; what makes Johns’ and Rauschenberg’s paintings of the middle fifties so interesting are precisely the marks of stress, pressure and conscious reaction to the precarious artistic situation of the moment. Around 1955, both painters—although Rauschenberg is working with multiple elements and Johns with a single image like a target or a flag—are covering over the whole surface. The works are densely- packed, solid looking, with an intensity that burns cold in Johns and hot in Rauschenberg. This reacting against and to the vital issues at a critical juncture comes across in the paintings in the sense of their being compact and condensed, determined and unyielding.

The paintings of Rauschenberg and Johns show so much intelligence we must assume the choice to cling to the modes of abstract expressionism after its creative heyday was not made in the dark, as one suspects it was in the case of de Kooning’s followers. That Rauschenberg is acutely aware of the ironies of his situation is clear in his duplicated “action paintings” Factum I and Factum II, in which he proves the lie of abstract expressionist spontaneity by accurately reproducing every drip and splatter. In Johns’ case, Michael Fried’s statement that the later paintings “mock, not in venom but in loving sadness, the mannerisms of abstract expressionism”, seems to me entirely correct.

Recently, both artists have opened up their paintings, and have in general relaxed their attack and loosened their brush-work. However, having opted in this direction, they proceed in their respective ways, better equiped to amuse, entertain or reward us aesthetically than the second-generation abstract expressionists who are their peers, and with whom they have far more in common than with “pop art”.

For Rauschenberg, this means constantly pushing himself. His dynamism consists, I think, in the destruction of his own incredible facility and virtuosity through the conscious pursuit of the ugly or the inartistic. We understand this destructive quality as we understand the late pastels of Degas, in which Degas sought to efface the beauty of his own line by making the contours scribbled and broken. The seemingly inexhaustible inventiveness of Rauschenberg’s imagination, appears, in its restless ambition, to want to swallow the world.

Jasper Johns seems to me in love with his paintings. And the more he loves them, the better they are. Only a lover could lavish the kind of care and consideration Johns gives the surfaces of his paintings. Four of the paintings in the show are encaustic on newspaper; Johns revives the ancient technique of wax-painting in a way that again calls attention to the surface, which is both veined and suave, almost like skin over membrane, rather than harsh and rough like the surfaces of the abstract expressionists (or for that matter, Rauschenberg’s surfaces). Where Rauschenberg expresses himself in gesture, Johns prefers the delicacy of touch. False Start, an oil painting of 1959, is characteristic of the direction of Johns’ most recent works, but does not incorporate objects as many of them to. These 1959 paintings of bursts of the primary colors over which are stenciled “red”, “yellow” and “blue” are Johns’ poorest efforts; I can’t understand why this painting rather than any number of works from the sixties, which are better, is included. In such an historically oriented show, the impression given is that Jasper Johns died in 1959, while Jim Dine lived on to continue his great tradition.

Jim Dine appears to strive for a heavy-handed freshness, as if to make a virtue of his own clumsiness. If he could do this, it would be fine, but instead he seems capable only of cartooning his own ideas. I found him in all ways the least of the artists represented.

Lichtenstein is a case in point of Leo Steinberg’s observation (made at the Museum of Modern Art’s pop art symposium) that: “we have here one characteristic of pop art as a movement or a style: to have pushed subject matter to such prominence that formal or aesthetic considerations are temporarily masked out”. Before discussing the relevance of this statement to Lichtenstein’s work, I wish to disagree with the assumption that pop art is an art style. It is not; these artists are linked only through subject matter, not through stylistic similarities. This makes it possible to talk of the iconography or attitudes of pop art, but not of pop art as an art style, as one would speak of Baroque or Cubism. In fact, Rauschenberg and Johns belong to abstract expressionism (with Jim Dine a variation on their themes), Rosenquist is a billboard Surrealist who marries Magritte’s paint handling to collage space, and Lichtenstein is a hard-edge painter, whose two-dimensional surface patterns and crisp outlines derive as much from Kelly as from comic strips. Only Andy Warhol has actually offered anything new in terms of technique, by adapting the commercial and purely mechanical process of silk screen to the purposes of painting on canvas. As for whether formal or aesthetic considerations are being temporarily “masked out”, we must decide whether the subject matter of pop art is in fact strong enough to momentarily arrest the apprehension of formal relationships. This does seem true in Lichtenstein’s case. I find his images offensive: I am annoyed to have to see in a gallery what I’m forced to look at in the supermarket. I go to the gallery to get away from the supermarket, not to repeat the experience. Of course the point is, the experience is not the same, since Lichtenstein is creating a strong, highly-formalized surface pattern which belongs to art and not to advertising. Why he choses to dissociate image from pattern is another question. Simply put, I think it is because art itself is now suspect, and that Lichtenstein is saying, as Norman Mailer says, “Do not understand me too quickly”.

The Guggenheim exhibition seems to answer the question of whether “pop art” is art. I am willing to say that if it is in the Guggenheim, it is art. But art of what calibre? The range in quality from Rauschenberg’s early combine-painting to Jinne Dine’s Coat is almost too great to be bridged by merely setting them side by side. Museums are a center of authoritiy in our culture; if the museum believes these are equally art, what choice has a public which lives in awe of authority but to think so too? 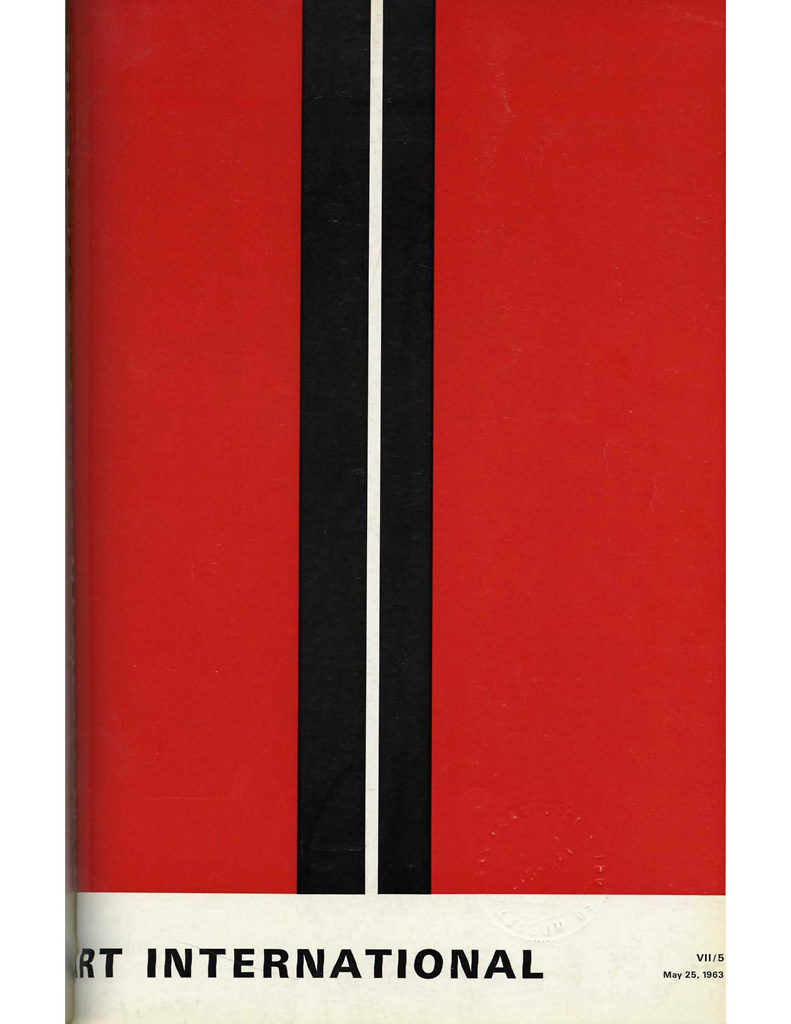