The subject keywords in SFMOMA’s online object record for Robert Rauschenberg’s series of five photographs Cy + Roman Steps (I–V) (1952) are delightful both as almost a found piece of poetry and for their uncanny ability to capture the equal parts of humor and erotic charge in these images. The list of words has a haiku-like potency: “pants, stairs, distance, standing, movement, clothing, torsos, legs, Cy Twombly.” The photographs depict the artist Cy Twombly (1928–2011) descending the steps of the Basilica di Santa Maria in Aracoeli, a thirteenth-century church on Rome’s Campidoglio, or Capitoline Hill, one of the most historic sites in the city (fig. 2).1 The images in Cy + Roman Steps (I–V) were most likely taken within the first few days of Rauschenberg and Twombly’s arrival in Rome in early September 1952. The two young artists had met the year before at the Art Students League of New York, where they studied. Rauschenberg and Twombly were both from the South, hailing from Texas and Virginia respectively, and would come to share an educational background that also included Black Mountain College in North Carolina. After meeting in the spring of 1951, they began a brief romantic relationship that soon evolved into a close, lifelong friendship. The relationship took on particular importance during their eight-month trip to Europe and North Africa between August 1952 and spring 1953.

In January 1952, while at Black Mountain College, Twombly had contacted the Virginia Museum of Fine Arts in Richmond to inquire about applying for a travel fellowship to Europe.2 Rauschenberg decided to join him if his application was successful and—notably—he helped Twombly prepare his portfolio.3 Twombly’s application was accompanied by, as he described it, “a portfolio of fine and clear photographs of my paintings taken by a young photographer from New York.”4 As Rauschenberg recalled, “I did [Twombly’s] portfolio. . . . I did big blowups of his work and dry mounted them beautifully.”5 Twombly was awarded the fellowship and, on August 20, 1952, they sailed to Europe from New York. This was Twombly’s first trip abroad and Rauschenberg’s second; he had lived in Paris while studying at the Académie Julian in 1948.6 By early September, after disembarking in Palermo and stopping briefly en route in Naples, the two artists were living in rented rooms in a hostel on the Piazza di Spagna in Rome, where, coincidentally, Roman Holiday was being filmed that year on location.7 If it was partly due to Rauschenberg’s photographs of Twombly’s paintings that the duo had been able to make the trip, then it is fitting that what survives from their journey does so principally through the medium of photography. Both artists’ output was affected by the constraints of travel and limited working space during this period, and Rauschenberg had made the pragmatic decision before they left to set aside painting in favor of photography.8 For Rauschenberg, the medium became both a means of documenting his travels and his primary mode of artistic expression, as he created studies of subjects ranging from Venetian gondolas to Moroccan grave markers, all captured by his Rolleicord twin-lens reflex camera. Indeed, during their first few weeks in Rome, as they viewed the famous sights, they indulged in many of the pleasures of the tourist abroad. Yet Rauschenberg consistently found innovative and witty ways to subvert the clichés of amateur travel photography. 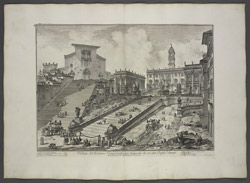 When hung side by side in a tight row, as they are meant to be seen and displayed, the images in Cy + Roman Steps (I–V) demonstrate a remarkable temporal and spatial progression. In the first photograph, all we see is a series of steps punctuated at the top center of the image by a pair of feet and legs cropped at the shin. Apparently standing on one of several landings that interrupt the vertiginous series of 124 marble steps leading up to the Basilica di Santa Maria (which is on the highest summit of the Campidoglio), Twombly seems to cast no shadow. The high contrast of the black-and-white print accentuates the intensity of the harsh late-summer Roman sun as it glances off the stark white stone, revealing details such as the cracks in the marble, the joins between slabs, and the scuff marks and erosion begotten by centuries of use. In the second photograph the viewpoint remains largely fixed, moving up slightly to reveal a glimpse of the church facade at the top and a bit of the staircase’s stone banister in the upper left corner. The figure of Twombly, however, has descended ten or so stairs to occupy more of the picture, and his legs are cropped by the edge of the image just below crotch level. His shadow rakes across two of the steps behind him, foregrounding not only the strong horizontal and vertical axes of these photographs but also Rauschenberg’s interest in the indexical trace of shadows as an analog for the process of photography itself, a phenomenon also explored in the earlier work Quiet House—Black Mountain (1949). 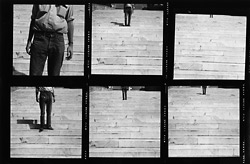 Indeed, the spatial and temporal progressions contained within Cy + Roman Steps (I–V) are consistently measured against the photographs’ horizontal and vertical grids. There is something cinematic about the images in this series, which resemble film stills in their fractured efforts to capture time cumulatively. In the third photograph Twombly has advanced another four stairs toward Rauschenberg; his body is visible below the level of his torso, as are his hands. He is presumably standing on another landing, and no shadow can be seen. The image frame has also crept up farther, cropping the bottom step while revealing a larger sliver of the unfinished brick facade of the church in the background. More of the stone banister enclosing the right side of the staircase also edges into view. In the fourth photograph Twombly is much closer to the camera’s lens, and he occupies a great deal of the image. Here we see his entire lower body (clad in blue jeans and moccasins) and his forearms, and he again casts a strong shadow over the two stairs behind him. The angle of the photograph has also moved horizontally toward the proper right of the staircase. The substantial advance in Twombly’s descent is explained by the fact that there was originally an additional photograph in this series (fig. 3). That image, which Rauschenberg ultimately chose to omit, would have appeared between the third and fourth photographs.9 In the final image Twombly’s midsection so fills the frame that the hair on his forearms is silhouetted against the blanched steps, which are now merely acting as a backdrop to the cropped close-up of his body. His wristwatch is clearly visible, reminding us of the extent to which these photographs engage the passage of time. This effort to capture time, pacing it out spatially and temporally through a medium-specific process of seriality, is also reminiscent of Rauschenberg’s This Is the First Half of a Print Designed to Exist in Passing Time (ca. 1949, fig. 4), which bears the distinction of being one of the few extant works from this period of the artist’s career, apart from his photographs. It is also one of his first works to employ seriality, albeit in printing. The prints—a series of woodcuts for which the wooden block was progressively striated with incised lines—are transformed from solid black to black and white across fourteen stages; like Cy + Roman Steps (I–V), these stages can only be properly read and understood in succession.

In Cy + Relics, Rome (1952, fig. 5), a photograph apparently taken on the same day as Cy + Roman Steps (I–V), Twombly wears the same blue jeans, moccasins, and casual shirt. But in this closely cropped image the emphasis is Twombly’s assiduous study of Rome’s monuments. We see Twombly standing full length, in profile, beside the giant hand of the emperor Constantine in the courtyard of the Palazzo dei Conservatori on the Campidoglio, surrounded by archaeological artifacts and clutching what appears to be a sketchbook. His posture is rigid, as if he is drawing himself out to his fullest possible height as he measures his body against these imposing fragments of a past colossus. Cy + Relics, like Cy + Roman Steps (I–V), exhibits an interest in the fragmented body as photographic subject and features the same contrast between a timeless setting and Twombly’s contemporary clothing. The theme of the artist being awed and humbled by such remnants of antiquity is itself classic. In an emblematic red chalk and sepia drawing known by various titles, including The Artist in Despair before the Magnitude of Antique Fragments (ca. 1778–80), Henry Fuseli depicts a figure sitting dejectedly in the same courtyard before other fragments of Constantine’s statue (fig. 6). Significantly, while Cy + Relics captures Twombly in an attitude of reverent contemplation, Cy + Roman Steps (I–V) focuses on the young artist’s assertive movement through the cityscape. 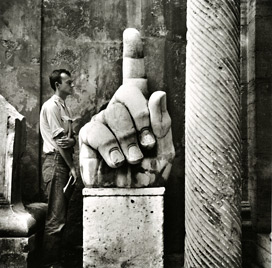 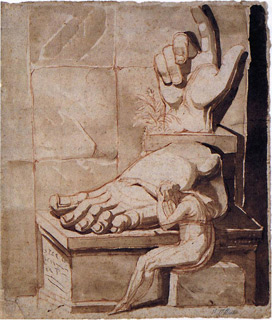 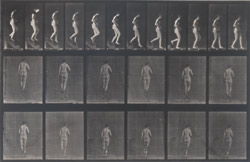 There is something of the striptease about the five images, in what is both gradually revealed and yet still concealed (most obviously Twombly’s face), and it is easy to imagine the collaboration between photographer and model as they created these photographs. The images rely on the photographer and camera remaining still while the subject advances. This tension between fixity and movement, photographer and subject—and of course the stairs, which provide a geometric, grid-like backdrop for this human movement and the passage of time—recalls, as Branden W. Joseph so aptly said, “both the steps on which [Eadweard] Muybridge’s models sometimes acted as well as the Cartesian grids against which they invariably conducted their tasks.”10 However, Joseph also notes:

[I]t is the distinction between Rauschenberg’s and Muybridge’s work that ultimately proves most telling. Muybridge’s photographs, at least the vast bulk of them, never depicted subjects who violated the boundaries of the frame or moved so close to the camera lens. Indeed, because Muybridge used a battery of a dozen or more cameras rather than one, the issues of distance and foreshortening so prominent in Rauschenberg’s sequence were rarely a factor. Even when running directly toward the camera, as happens in a couple of the images in Animal Locomotion (1887), Muybridge’s models never approach the lens anywhere as closely as Twombly.11

Cy + Roman Steps (I–V), in its temporal and spatial sequence and efforts to capture movement, is therefore in accord with the chronophotography of nineteenth-century pioneers such as Muybridge (1830–1904) and Etienne-Jules Marey (1830–1904).12 Rauschenberg in fact owned multiple plates from Muybridge’s Animal Locomotion series (1887, fig. 7), and he later gave Twombly a photograph by Muybridge that would influence Twombly’s Treatise on the Veil paintings (1968–70) and his efforts to capture the passage of time and linear progression on the picture plane.13 Spatial and sequential motion also resurface in Rauschenberg’s later works, such as the Combine painting Double Feature (1959), which includes a collaged photograph of motion studies akin to chronophotography, and the silkscreen painting Express (1963), which includes a chronophotograph of a woman walking down a flight of stairs that irresistibly recalls Marcel Duchamp’s Nude Descending a Staircase, No. 2 (1912). Indeed, Rauschenberg’s photographs of Twombly on the steps of the Basilica di Santa Maria also seem to suggest an early but perhaps coincidental interest in the dynamism and simultaneity of Duchamp’s painting.

Nicholas Cullinan is curator of modern and contemporary art at the Metropolitan Museum of Art, New York. Previously he was curator of international modern art at Tate Modern, London, where he worked on exhibitions such as Duchamp, Man Ray, Picabia (2008), Cy Twombly: Cycles and Seasons (2008), and Pop Life: Art in a Material World (2009). In 2011 he curated the postwar Italian art section of the Fondazione Prada’s opening exhibition for Ca’ Corner della Regina in Venice; the exhibition Twombly and Poussin: Arcadian Painters at Dulwich Picture Gallery, London; and Tacita Dean’s Unilever commission for Tate Modern’s Turbine Hall. He is the author of Robert Rauschenberg: Photographs 1949–1962 (ed. David White and Susan Davidson, 2011) and a forthcoming monograph on Cy Twombly, and he writes regularly for publications such as Artforum, Burlington Magazine, Frieze, Mousse, and October.