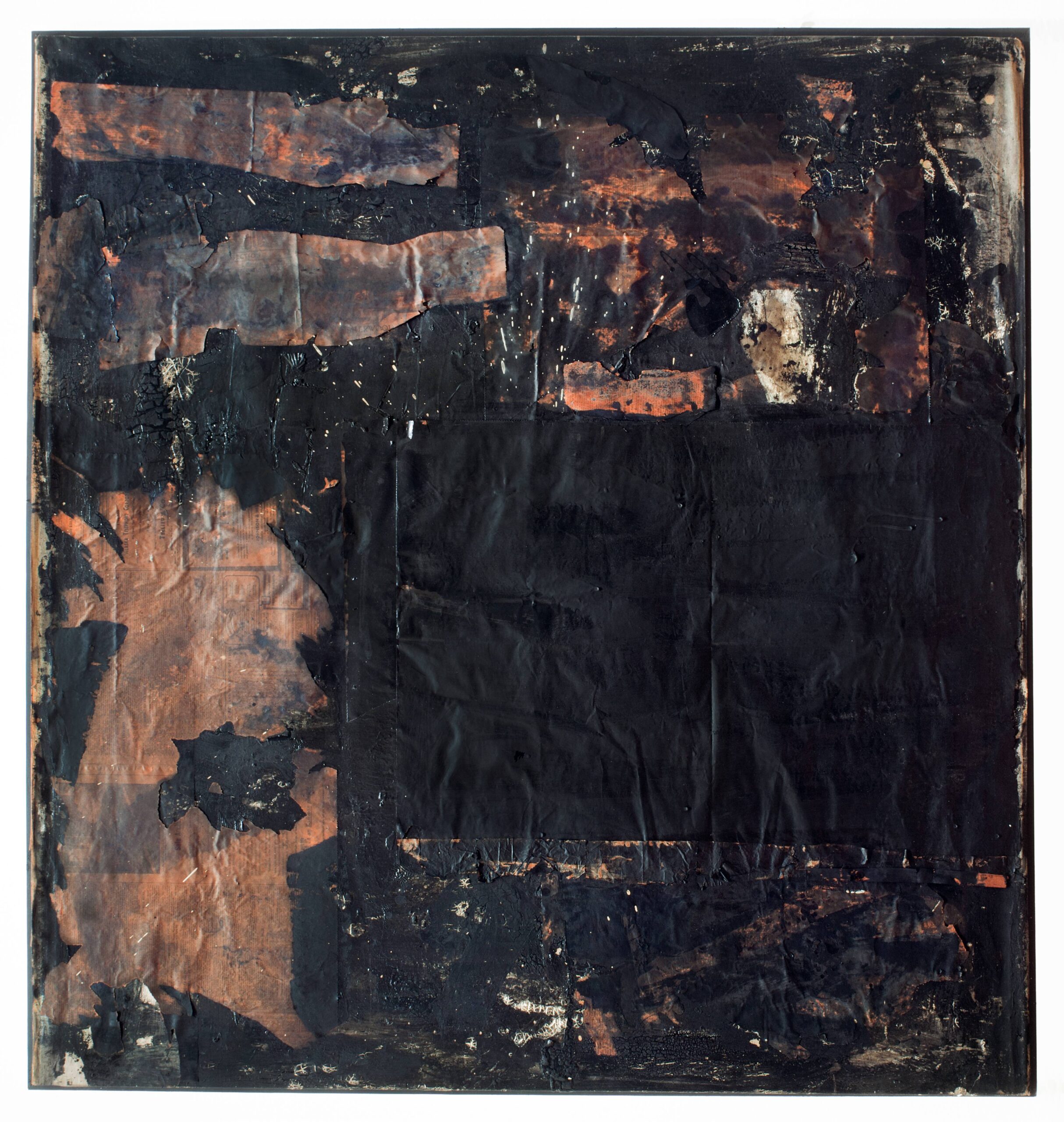 In September 1953, visitors to the Stable Gallery in New York encountered three bodies of work by the twenty-seven-year-old artist Robert Rauschenberg. Installed among a number of large, monochromatic pictures, now known as the White Paintings (1951), and a few Elemental Sculptures (ca. 1953)—objects combining stone, wood, rusted metal, and found objects—was a selection of his Black paintings, an imposing series of large canvases layered with newspaper and dark paint of varying finish and consistency.1 Among the works on view was this untitled canvas, now known as Untitled [black painting with portal form] (1952–53), which the artist is believed to have begun in early 1952.2 This painting was one of several compositions that originated at Black Mountain College near Asheville, North Carolina (fig. 2), where Rauschenberg studied intermittently between 1948 and 1952. In August 1952, Rauschenberg accompanied his friend and Black Mountain colleague Cy Twombly (1928–2011) on an eight-month trip through southern Europe and North Africa. Upon returning to the United States in April 1953, he went back to work in his Fulton Street studio in New York, completing this canvas and several others in what is generally understood to be his second wave of Black paintings.3 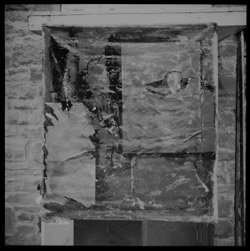 Along with the White Paintings, which Rauschenberg completed in 1951, the Black paintings signaled the young artist’s awareness of the status of the monochromatic canvas within the lineage of modernist painting, particularly as it was developing in the late 1940s and early 1950s at the hands of artists such as Barnett Newman (1905–1970), Franz Kline (1910–1962), and Willem de Kooning (1904–1997).4 Although the White Paintings and the Black paintings explored related formal strategies, the Black paintings in particular have been read as a response to the innovative rethinking of the monochrome that was occurring in those years. Rauschenberg’s reduction of his palette to black and white also reflected his efforts to break free from the intense color curriculum of Josef Albers (1888–1976), under whom he had studied at Black Mountain. Rauschenberg later commented in relation to his works from this period: “[Albers] said that you had to have a good reason to decide one color over another . . . I met a lot of nice colors, but I couldn’t justify with any idea what would be a better one or not.”5 In a very real sense, Rauschenberg’s decision to limit his palette to black and white in the early 1950s was a return to basics, and he was careful to distinguish his approach from the thinking that guided the overdetermined psychological and emotional connections to blackness often associated with abstract expressionist canvases of the 1940s. Yet at the time of their first public showing the Black paintings were described as “battered,” or somehow connected with negative or “destroyed” qualities, and failed to garner critical acclaim.6

In many of his Black paintings, including Untitled [black painting with portal form], Rauschenberg layered the canvas with pieces of scavenged newspaper that ranged in size from small scraps to entire sheets (fig. 3). This gesture represented a clear reworking of aspects of the abstract expressionist painterly vocabulary7 and also emphasized his interest in both the texture of the canvas and its structural mediation through the everyday materiality of a disposable item. When coated with paint, the cheaply produced newsprint buckled, creased, and roiled in unpredictable ways, effecting a highly variegated, slightly shimmering surface that caught the shifting light and shadows of its environs and produced an elegant study in the interrelated categories of “structure, texture, and facture”8 emphasized by Albers. The brilliance of Untitled [black painting with portal form] is that one can simultaneously appreciate the artist’s complex handling of paint across an array of uneven surfaces while acknowledging the ways that the artwork, in its use of newspaper as a formal and almost sculptural element, bridges painting, collage, and assemblage. The work offers up a new understanding of painting as wholly engaged—and in active, embodied dialogue—with its environment. In Rauschenberg’s hands, the newspaper acts as a parallel to painting in some ways and as a collage element in others. As such, the painting functions much like a translational document, a mediating step between Rauschenberg’s earlier concerns with the receptive potential of monochromatic surfaces, most clearly exemplified in the White Paintings and his subsequent Combines (1953–64), hybrids of painting, sculpture, collaged paper, and found items that knowingly bridged the vertical space of the canvas with the world of the viewer.

Rauschenberg selected newspaper not for its text or images but rather for its material factness, a quality John Cage (1912–1992) described as the artist’s “third palette.”9 The shape of an unfolded sheet of newspaper—a rectangular grid comprising four quadrants—seems to anchor the composition and dictate the overall flow of the other forms that populate it. The productive tensions between an abstract expressionist engagement with surface, paint, and gesture and a more decisive shift into the ambiguous terrain between painting, collage, and assemblage find their fullest expression in Untitled [black painting with portal form], specifically in the way the composition is structured around (and then decisively proceeds from) a tonal, monochromatic center: a flat, inky, double-truck sheet of newspaper. In what one may call the painting’s melodic “theme,” this form is in turn echoed and inverted in its adjacent “variations,” three regions that, in an aggressive improvisation on the structural unity of the central organizing principle of the canvas, respectively reveal more (or less) actual newsprint than the central black rectangle.

Like Rauschenberg’s Elemental Sculptures, which were meant to be manipulated and can be installed in various positions, Untitled [black painting with portal form] can be hung either horizontally or vertically, tempering the viewer’s corporeal relationship to a large, imposing, matte black form by rearranging the compositional field.10 When the work is displayed horizontally (fifty-four inches wide by fifty-one inches high), the rectangular center of the painting is vertically positioned, suggesting a uniformly darkened doorway, window, or portal. In this “landscape” format, the portal is more recognizable as receding ground, surrounded by its mottled environs. When the painting is rotated ninety degrees, this form then assumes a more horizontal position and reads less like an opening, more frankly acknowledging its literal correspondence to a sheet of newspaper.

Because Rauschenberg employed different kinds of black paint—matte, glossy, flat—one may rightly interpret Untitled [black painting with portal form] and its variants strictly in terms of patina: to speak of a slow curing of the thick paint; of a field of many shades of black; of a blistering landscape riven with crests and valleys, cracking to reveal the occasional presence of white and gray pigment. With the artist’s subtle use of different shades of paint, as well as his careful attention to the variegated surface of the canvas, the painting stands as a successful intervention into the terrain of abstract expressionist painting. Within a year of completing Untitled [black painting with portal form], Rauschenberg began to engage the textual content of his materials more overtly, adding words and a variety of printed material to his compositions, thus emphasizing a direct relationship to the media-saturated landscape and the world at large. With many of his paintings from 1951–53, the artist explicitly acknowledged the historical weight of the monochrome yet deftly pushed beyond a mere rehearsal of its formal concerns, alluding subtly to the increasingly porous borders of the modernist canvas and its implied sanctity. That these gestures are simultaneously legible in Untitled [black painting with portal form] is a testament to its significance, both in the immediate context of Rauschenberg’s work of the 1950s and as a forecasting of the experimentation and blurring of artistic boundaries that would follow in its wake.

James Merle Thomas is an art historian and curator based in San Francisco and Washington, D.C. He is currently the Chester Dale Predoctoral Fellow at the Center for Advanced Study in the Visual Arts at the National Gallery of Art, and is completing his PhD in the Department of Art and Art History at Stanford University, where he focuses on modern and contemporary art. A study of the aesthetics, politics, and science of the Apollo era, his dissertation explores abstract art, experimental architecture, and radical design of the 1960s and 1970s avant-garde, as related to the National Aeronautics and Space Administration (NASA). Thomas was previously a Daniel C. Guggenheim Fellow at the National Air and Space Museum at the Smithsonian Institution, Washington, D.C., and is now preparing an exhibition about Robert Rauschenberg’s interests in NASA and spaceflight. Previously, Thomas was assistant curator of the Second Biennial of Contemporary Art of Seville (2005) and the Seventh Gwangju Biennale (2007).
read more 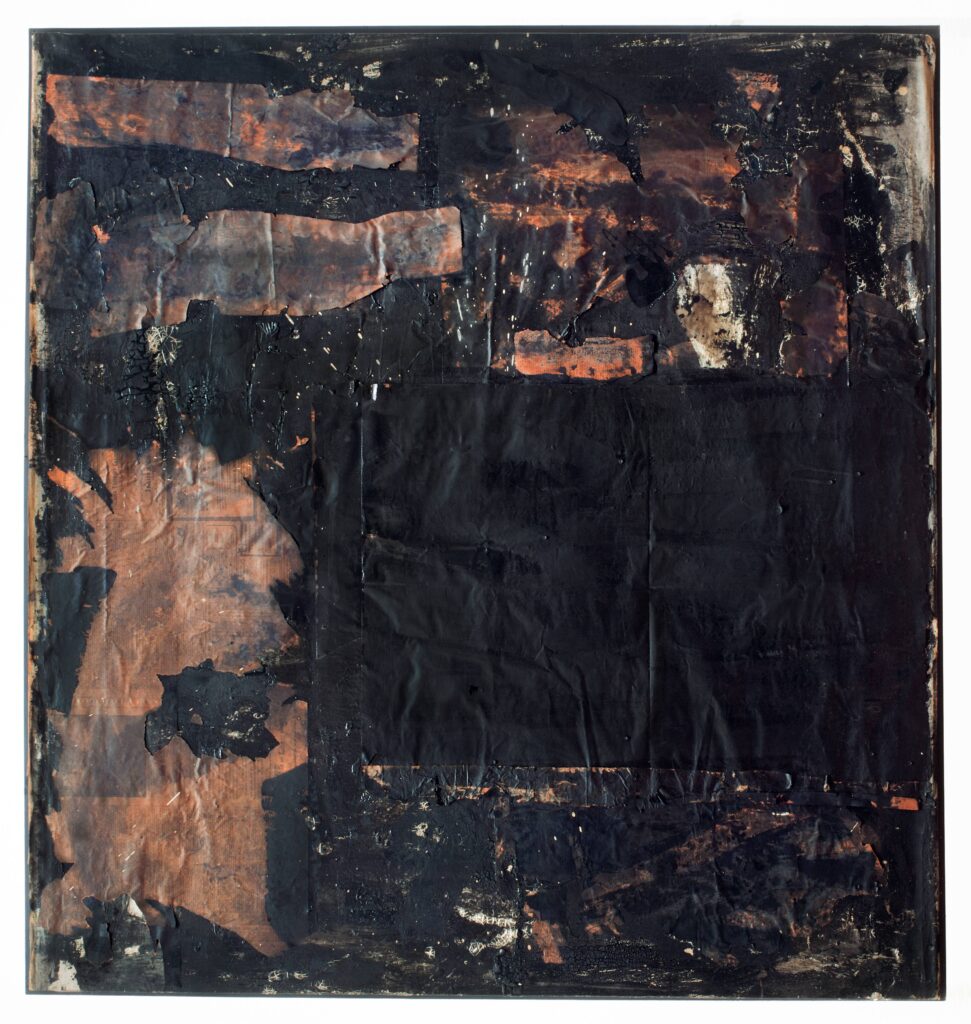