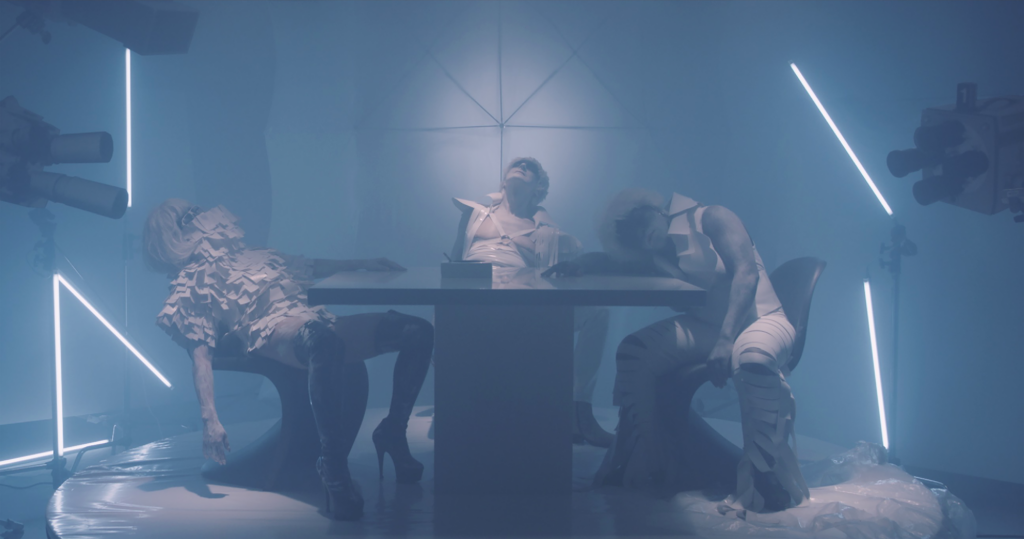 Please join us at 5 p.m. for a cocktail hour (cash bar) before the performance.

A newly commissioned three-channel video work and live performance, Hustlers & Empires (2018) interweaves stories of three aging hustlers from different time periods who each find themselves pushed out of their own game and forced back to confront what their lives have become. Inspired by Iceberg Slim’s Pimp (1967), Marguerite Duras’s The Lover (1984), and Federico Fellini’s Toby Dammit (1968), Handelman draws on the stories of three real and imagined hustlers. Handelman re-contextualizes these historical and literary characters through three legendary performers — Shannon Funchess, John Kelly, and Viva Ruiz — in a queer, feminist framework, opening up questions of survival and belonging, intersecting with issues of race, class, and gender.

Michelle Handelman’s new work, Hustlers & Empires, unfolds like a memory play, as three unnamed figures gather for a talk show and recount their lives on the make. Loosely based on the lead characters of Iceberg Slim’s memoir Pimp (1967), Federico Fellini’s short film Toby Dammit (1968), and Marguerite Duras’s novel The Lover (1984), the three protagonists weigh their unique transgressions against stacked social decks. Starring Shannon Funchess, John Kelly, and Viva Ruiz — performing artists well-known for their disruptive aesthetics — this three-channel video projection and installation draws on criminal glamour to illuminate the journey of the outsider: part survival strategy, part self-aggrandizement, and part critique of the world as it is.

Michelle Handelman’s Hustlers & Empires is presented as a part of the Limited Edition series.

Michelle Handelman uses video, live performance, and photography to make hypnotic moving image installations that push against the boundaries of gender, race, and sexuality. Coming up through the years of the AIDS crisis and Culture Wars, Handelman has built a body of confrontational and phantasmagoric works that blur the line between fiction and reality, investigating philosophical questions of existence about the things we collectively fear and deny: sex, death, and chaos. A 2011 Guggenheim Fellow, Handelman has been exhibited internationally, including at Pompidou Centre, Paris; ICA, London; Eli & Edythe Broad Art Museum, Michigan; PERFORMA; Guangzhou 53 Art Museum; PARTICIPANT, INC, NYC; Lincoln Center; REDCAT. Her work is in the collection of Moscow Museum of Contemporary Art; Kadist Art Foundation SF/Paris; di Rosa Foundation and Preserve, California; and Zabludowicz Art Trust, London. Handelman is an Associate Professor in the Film, Media, and Performing Arts department at the Fashion Institute of Technology, NYC. She lives in Brooklyn, New York. 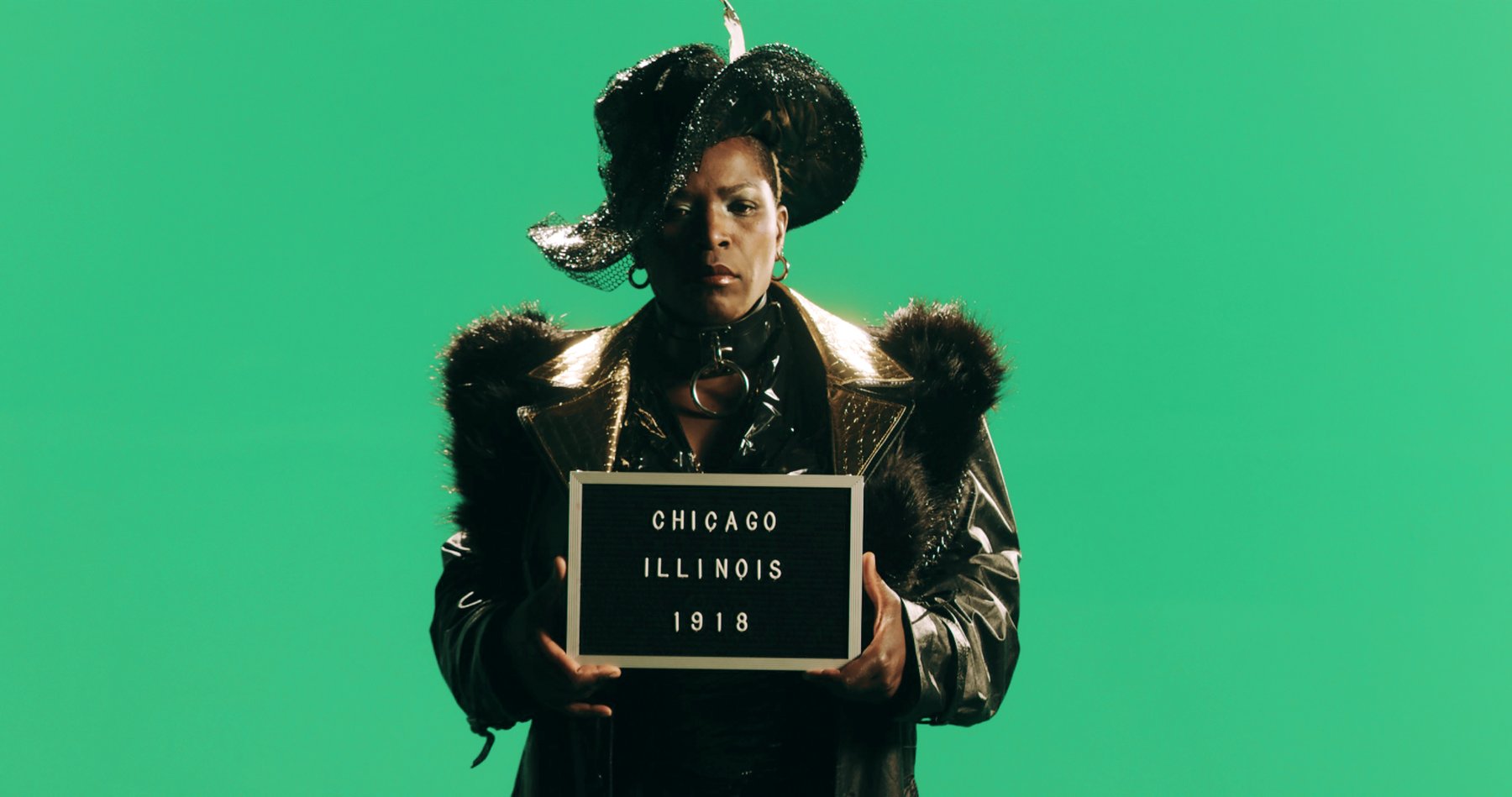 Shannon Funchess is an iconic figure in the underground music scene as the founder, vocalist, and multi-instrumentalist of the dark, electronic band Light Asylum. Funchess developed her powerful contralto singing in a Southern Baptist church choir as a child, adding Joy Division and Bauhaus to her list of influences as a teen. She moved to Seattle in the late 1980s, performing in indie rock bands, before moving to New York in 2001. Funchess’s vocal prowess has been sought after for many collaborations with acts such as TV on the Radio, The Knife, and LCD Soundsystem. In 2015, she participated in a Knight Foundation residency in Detroit, spearheaded by the electronic duo ADULT. Funchess, now residing in Portland, Oregon, is currently enlivening a twenty-year DJ career, performing new solo material under the moniker Healing Crisis and producing the sophomore follow-up album to Light Asylum’s 2012 self-titled debut LP released on Mexican Summer Records. 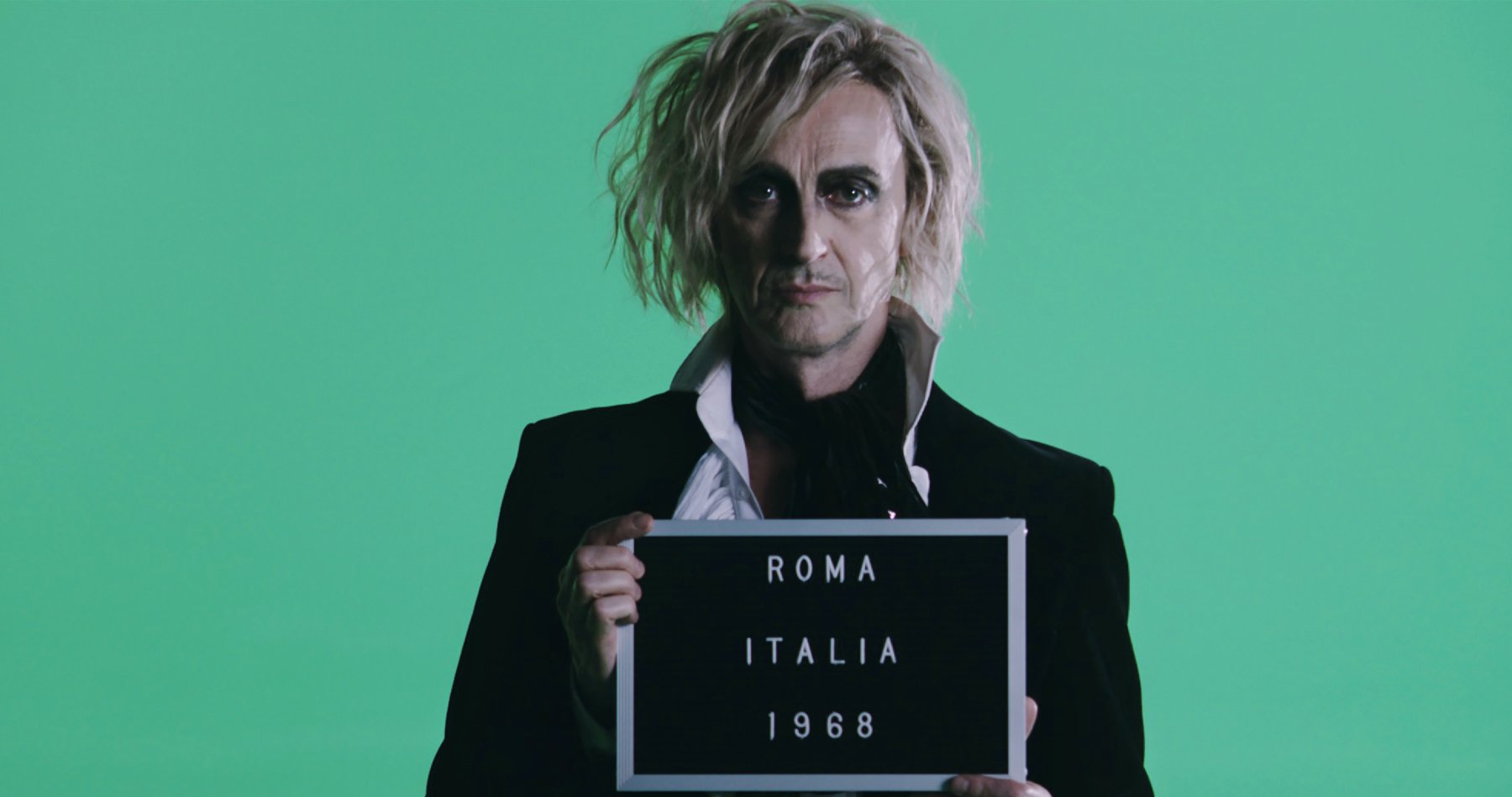 John Kelly is a New York City downtown legend whose works dealing with queer identity and the AIDS crisis have been performed at The Kitchen, Lincoln Center, the Warhol Museum, the Whitney Biennial, PS 122, Brooklyn Academy of Music’s Next Wave Festival, and London’s Tate Modern. Kelly has received two Bessie Awards; two Obie Awards; two NEA American Masterpiece Awards; CalArts/ Alpert Award in Dance/Performance; a Visual AIDS Vanguard Award; and the 2010 Ethyl Eichelberger Award. As a singer he has collaborated with composers David Del Tredici, Laurie Anderson, and The Jazz Passengers. Acting credits include The Clerk’s Tale (Spencer Reese), a film by James Franco. His musical gender-crossing performance as Joni Mitchell, brought Mitchell herself to tears, with the singer calling his portrayal “uncanny.” He recently released his first solo recording “Beauty Kills Me” (2016) and is currently completing his first graphic novel. 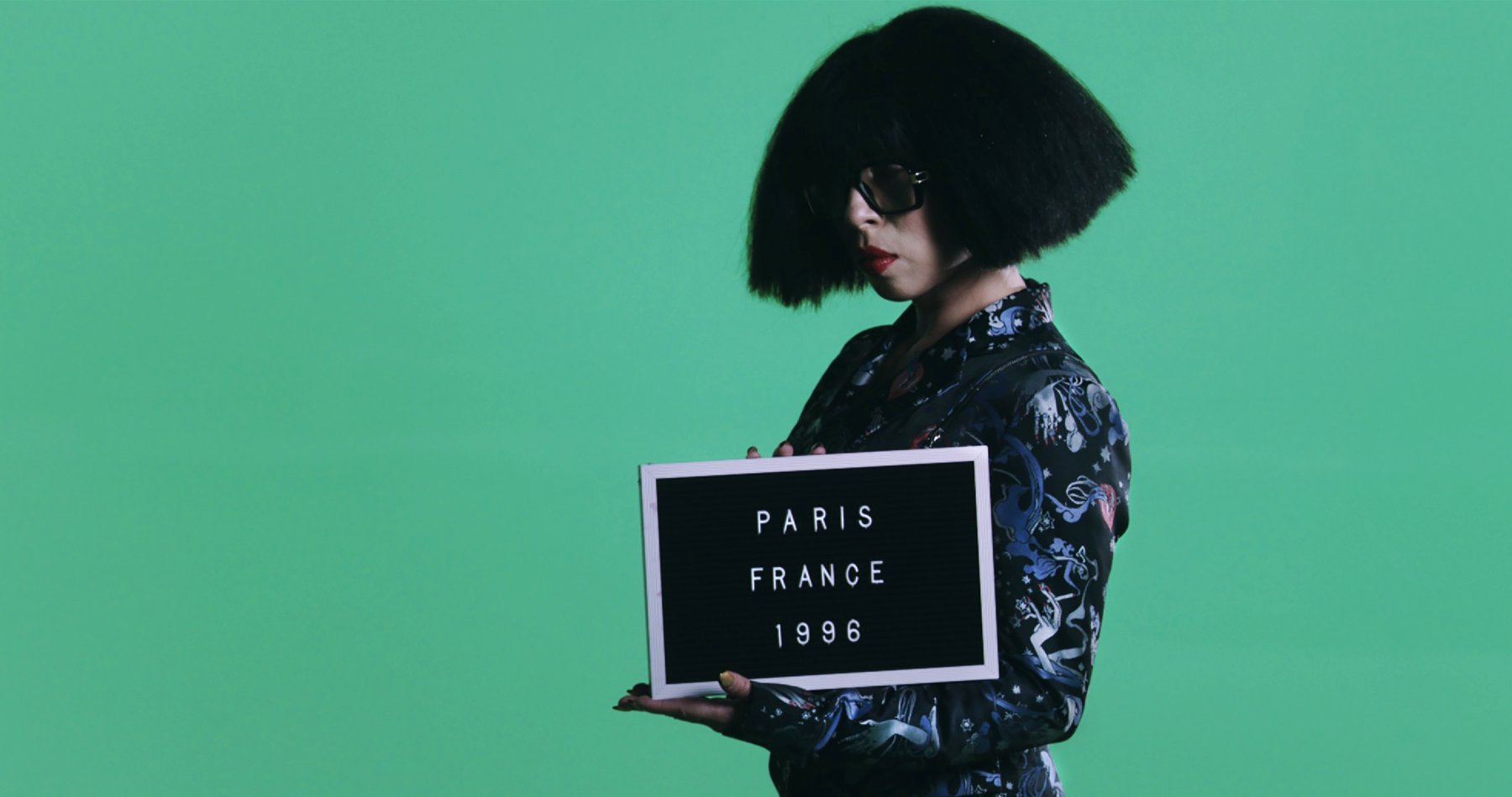 Viva Ruiz is the daughter of Ecuadoran immigrants and an artist. As a musician Ruiz has collaborated with artist Desi Santiago in their Latin art-house duo Escandalo, with Gavin Rayna Russom in the disco mystic commune The Crystal Ark, and has been a contributing vocalist for electronic music producers including The Carry Nation, Lauren Flax, and BEARCAT. As a dancer/choregrapher Viva has worked with Theo Kogan, Debbie Harry, and Danzig, as well as being a core member of the street troupe The Dazzle Dancers. Ruiz’s original telenovelas have been shown at festivals and art spaces such as Mix NYC, Outfest LA, Deitch Projects, PS1 Moma, and Futura in Prague. She is an actor and performance artist working in the past with audio-visual assault pioneers the Big Art Group and most recently starred in Bruce La Bruce’s latest feature The Misandrists. Ruiz is currently creating wearable graphics and a body of music around her abortion de-stigmatization project Thank God For Abortion. A self-titled show was mounted in June 2017, as a weeklong shop, installation symposium, and prayer campaign at Larrie, NYC. Ruiz’s multimedia solo show Pro-Abortion Shakira is slated for Participant Gallery Spring 2019.

Jonathan Kreinik has been busy with an eclectic roster of artists as producer and engineer, as well as traveling the world doing live sound for the likes of the Rapture, LCD Soundsystem, Le Tigre and TV On the Radio. Recent evidence can be found in his work on Danger Mouse’s Grammy-nominated track “Chase Me” featuring Run the Jewels and Big Boi, Co-Producing Sqürl’s (Jim Jarmusch and Carter Logan) “Paterson Score,” and recording and mixing the punk outfit Surfbort’s “Bort To Death” release. He has also worked with the bands Trans Am Frodus. Moving out from behind the console, Jonathan is in the band Jean Miche (Swedish Columbia Records) and releases music under his own name as well as under his AKA JK alter ego. Otherwise, Jonathan likes to walk around and take photos.

Svartsinn (Jan Roger Pettersen) is an artist from Trondheim, Norway. He has been making music in the dark ambient genre since 1999. Over the years Svartsinn has made five full-length albums including his debut “Devouring Consciousness” released via Eibon Records in Italy, “Of darkness And Re-Creation,” “Traces of Nothingness,” “Elegies For The End,” and “Morkets Variabler” released via Cyclic Law in Berlin, and the split album “The Borrowed World” (with Northaunt) via Loki Foundation/PAS. Svartsinn also appears on several compilations, movie soundtracks, and theatrical productions. In addition to recordings, Svartsinn performs live frequently — recently accompanied by cellist Amund Ulvestad.

More comfortable expanding sonic and musical boundaries than being confined by them, Quentin Chiappetta enjoys an unusually wide-ranging career as a composer, sound designer and mixer for the stage, the screen, and the art world. For 20 years he has been a favored collaborator of many artists and musicians including Christian Marclay’s renowned 24-hour piece “The Clock.” His sound installations are part of permanent museum exhibitions in Panama and Calgary. Recent work includes collaborations with Yvonne Rainer for her latest piece “The Concept of Dust” and sound design for the premiere of “Black Inscription” by Carla Khilstadt.

Hair and Make Up

Supported by a co-commission with the San Francisco Museum of Modern Art and grants from the New York State Council of the Arts; Art Matters, NYC; The School of Liberal Arts, Faculty Development Grant, Fashion Institute of Technology, NYC.