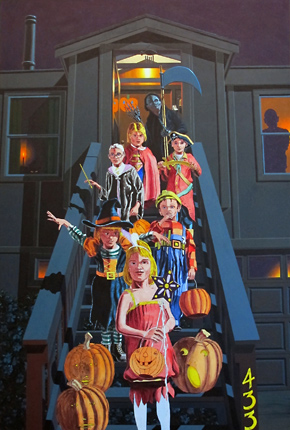 With a professional career that has spanned four decades, James Torlakson may be best known for his photo-based realism, though working from life is still an active part of his creative process. His imagery has centered on everyday America, shifting over the years to include trucks, railways, amusement parks, waterfronts, fireworks booths, deserted drive-in theaters, and coastal landscapes.

Torlakson explains: “Often I am pointing out things that would be bypassed as mundane or very ordinary, therefore not normal fodder for aesthetic attention. Given a personal and honest perspective, most anything is worthy of consideration.” For the upcoming exhibition, Torlakson will show several five oil paintings, including Halloween, a recent large work depicting his children trick-or-treating.

In the photographs of his Fog at Night series, William Farley explores natural and man-made environments. These have a dimension of expectation to them, similar to the atmosphere surrounding a movie set, where some dramatic human behavior has just taken place or is about to begin. He photographs urban and rural landscapes absent of their inhabitants, where the elementals seem visible and available to be recorded.

Farley calls this work an exploration of his belief that the photographic image “has the potential to reach beyond the rational mind to our innate understanding of the mysterious beauty of the material world.”