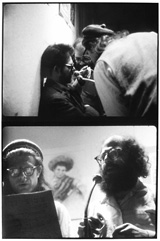 Robert Frank Retrospective: Me and My Brother

Image: Robert Frank, Me and My Brother (still), 1965-68; photo courtesy of the Museum of Fine Arts Houston and Robert Frank

SFMOMA would like to thank the Museum of Fine Arts, Houston, home of the Robert Frank Film and Video Archive, for its support in providing prints and other assistance for this program.

Frank’s first feature-length film places documentary footage of poets Allen Ginsberg, Peter Orlovsky, and Peter’s brother Julius within a fictional framework. Constantly delineating real and imaginary situations and moving back and forth between color and black-and-white, the film describes the inner and outer worlds of Julius, a catatonic who silently observes the world around him. The film was reedited in 1997 to mark the passing of Allen Ginsburg and also features the late Joseph Chaikin, founder of the revolutionary Off Broadway company Open Theater.