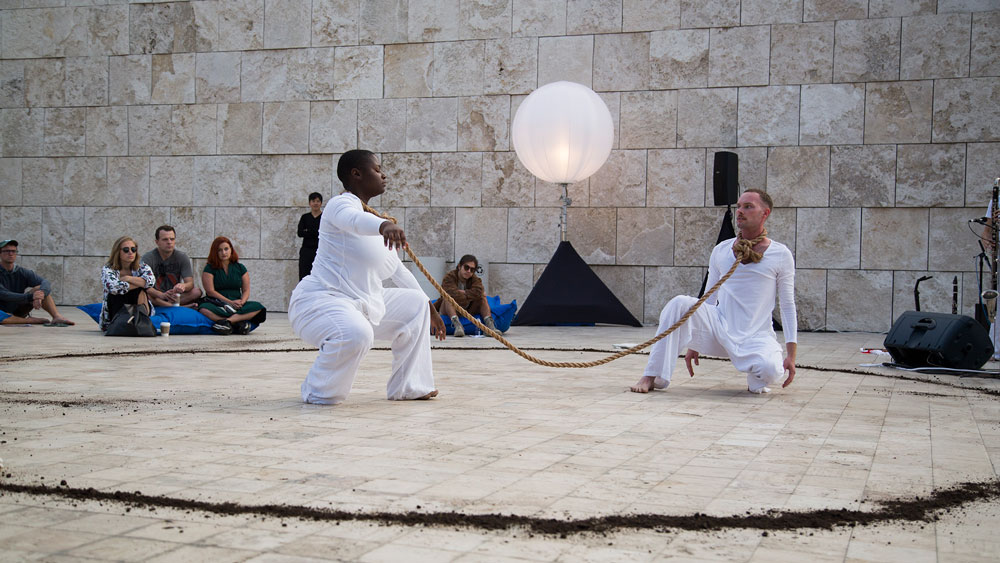 Performance starts in the 2019 SECA Art Award exhibition and proceeds to Floor 2 public space.
Free and open to the public; museum admission required only for the brief gallery portion of the performance.

In conjunction with Kenyatta A.C. Hinkle’s installation THEY, on view in the 2019 SECA Art Award exhibition, this two-part performance explores points of contact between colonial powers and the geographies that became occupied, stripped, and disrupted by imperialism and empire. The “Historical Present” is a mantra for Hinkle’s practice in which she creates performative situations to grapple with the residue of history associated with the exotification and exploitation of the Black femme experience.

The Evanesced: Embodied Disappearance [PANGEA], the first part of the performance, is an expression of the #SayHerName movement of mourning, awareness, and healing. Hinkle will respond to a soundtrack of whispers, shuffles, and snippets of popular and underground music to evoke a variety of womxn navigating historical and contemporary contexts.

In the second piece, Exploring the Nowannago: Kentifrican Modes of Resistance, Hinkle and her longtime collaborator Tyler Matthew Oyer will perform with the Nowannago, a rope form recreated by the artist and similar to the ancient Egyptian symbol Oroboros, a serpent that eats its own tail. The physical struggle between Hinkle and Oyer creates an intense tug of war that references issues plaguing local and global societies, such as gentrification, human trafficking, violence against LGBTQIA+ communities, genocide, xenophobia, and climate change.

Kenyatta A.C. Hinkle is an interdisciplinary visual artist, writer, and performer. Her artwork and experimental writing has been exhibited and performed at The Studio Museum in Harlem, Project Row Houses, Hammer Museum, the Museum of Art at the University of New Hampshire, and SFMOMA. Hinkle is currently an assistant professor of painting at UC Berkeley’s Department of Art Practice.

Tyler Matthew Oyer is an artist, writer, and organizer based in Los Angeles who has presented work at venues such as MoMA PS1; REDCAT; dOCUMENTA (13), Kassel, Germany; Hammer Museum; and Kunstnernes Hus Oslo, Norway. His work is in the permanent collections of the Museum of Modern Art, New York; Los Angeles Contemporary Archive; and Museu d’Art Contemporani de Barcelona.