A Conversation About Joan Mitchell

The dilemmas — and delights — of writing about an artist who defies easy categorization.

On September 4, SFMOMA will debut “Joan Mitchell,” a retrospective co-organized with the Baltimore Museum of Art (BMA) that spans the artist’s remarkable career. The show is co-curated by Sarah Roberts, Andrew W. Mellon Curator and Head of Painting and Sculpture at SFMOMA, and Katy Siegel, BMA Senior Programming & Research Curator and Thaw Chair of Modern Art at Stony Brook University.

To celebrate the release of the exhibition’s accompanying catalogue, published by SFMOMA in association with Yale University Press, the co-editors and co-curators reflected on Mitchell’s enduring appeal, her uncompromising practice, and the contours that shaped her life. A transcript of that exchange, produced by Yale University Press, is below.

Sarah Roberts: It seems to me that Mitchell’s appeal lies in the intersection of her monumental achievement as an artist and her extraordinary life. Her biography has the makings of a feature film, and it is easy to get caught up in the drama of her privileged upbringing, her friends and lovers, her sometimes outrageous behavior. But at the center of it all, driving her relationships and decisions, was her conviction in and dedication to painting.

Katy Siegel: I think that’s one of the hardest things for people—some people—to imagine about a woman: that making art was the most important thing in her life. It isn’t the only way to be an artist, and it wasn’t a choice available to all women at the time (or today), but it was true for Joan Mitchell, and it felt important to make a book that made that choice, and its success, very clear.

SR: She lived life at an operatic pitch, and her travel, losses, and loves all impacted or came through in her work. So a key problem we had to grapple with from the start was how to talk about the contours of her biography as they intersected with the paintings themselves, without sensationalizing or overemphasizing the life.

KS: Yes, we were very conscious of criticism that accounts of women artists are overly biographical. But it was interesting to think through the critique of biography with younger women on the research team who don’t have that generational bias, who didn’t see biography and material attention to art as mutually exclusive methods. In the end, putting the two in active relation felt not only fresh but true to Mitchell herself. Of course, the proof isn’t in a theoretical position, but in specific paintings….

SR: Very true—if unfolded in all its complexity, discussion of a work like To the Harbormaster touches on her friendship with Frank O’Hara (the title comes from one of his poems), her response to that poem and his work more broadly, perhaps a direct memory of an experience at the seashore, and the intersection of those things with the internal development of her process, as well as her engagement with dialogues around painting in both New York and Paris at that moment as she traveled back and forth. 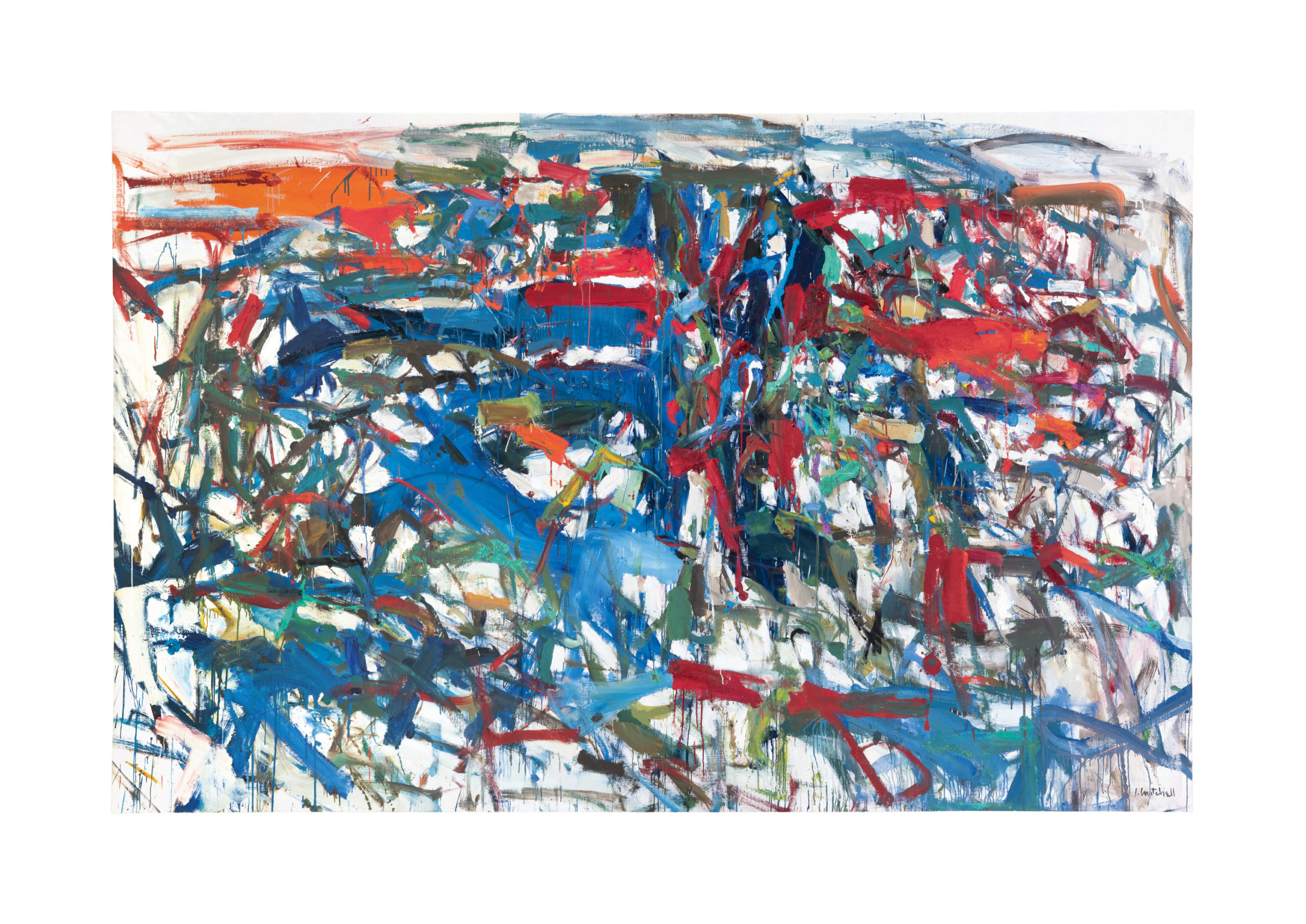 KS: All of that arriving and departing, including the process—gestures emphasized and negated. It’s amazing how many different experiences can go into a single painting, and yet Harbormaster comes together as a gorgeous thing. Coherent, but not easily legible. That capaciousness is abstraction’s always-relevant quality. And Mitchell asks new things of abstraction, although we keep using the same old word.

SR: Totally agree. I always come back, slightly in awe, to how she straddles and defies both abstraction and landscape. There is no word for the territory she created between the two. I like that you chose the word gorgeous—many of the paintings are unabashedly beautiful. Some are also determinedly not. And some are both. Beauty is another danger zone for women artists . . .

KS: Especially for those who came up in postwar New York. Frankenthaler found one solution, which was to court the feminine with enormous scale and ambition. Mitchell chose differently. There is a beautiful/ugly duet, especially in the 50s and early 60s work—in their essay for the book, Eileen Myles dives into that quality in City Landscape, and Mitchell’s openness about her own strength, even when that strength was perceived as abrasive. For a few months “Fierce Beauty” was the working title for the show; in the end, we titled the intro to the catalog “Beautiful Weed,” because that’s how Mitchell saw herself: unruly, out of place, not always valued, and yet beautiful, as she defined it. 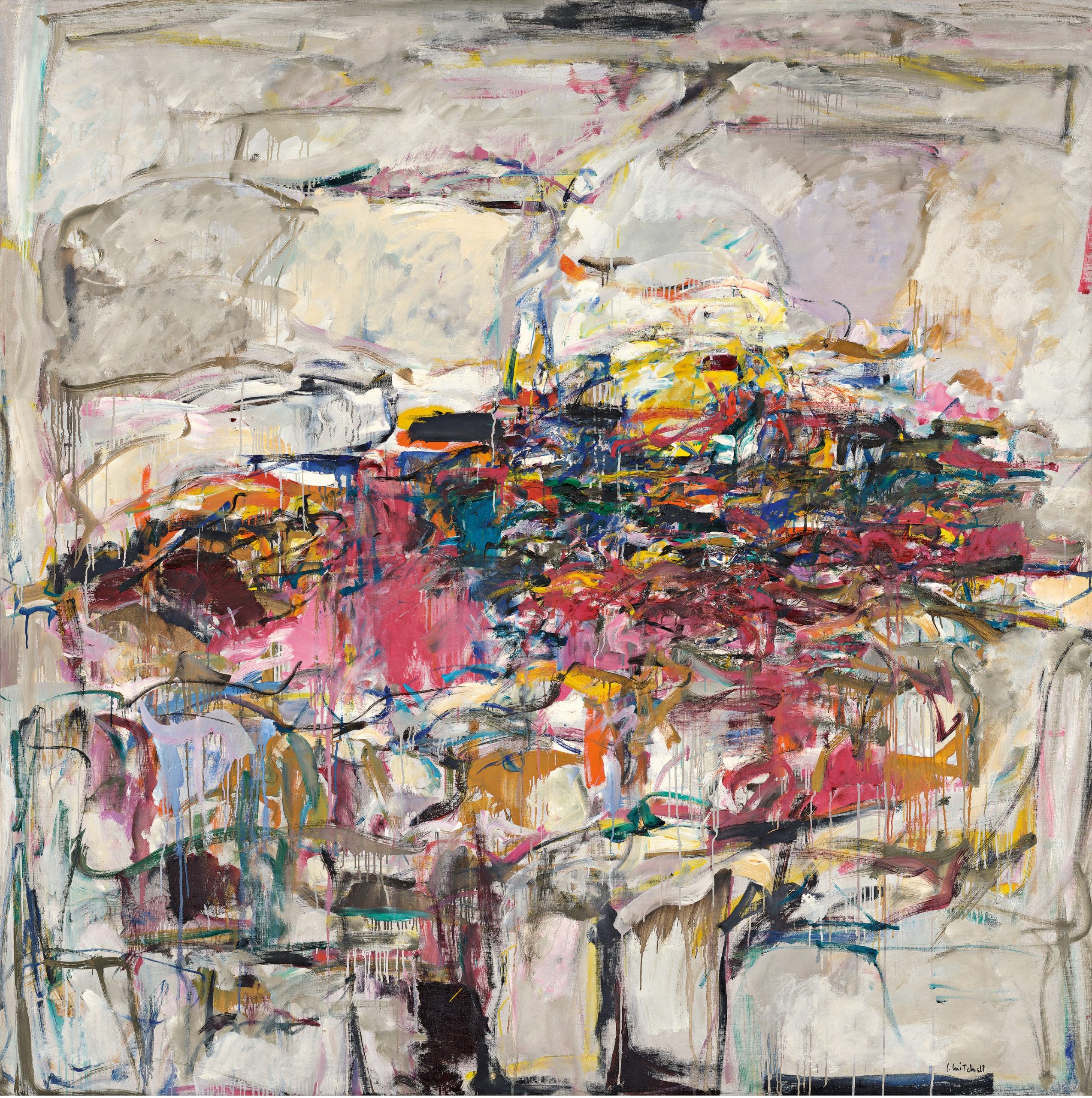 SR: And she had such a specific understanding of beauty. I think we were both surprised during the research when we came to this realization: for Mitchell, beauty largely meant color and nature in French 19th-century painting. It seems so out of sync with the rest of her generation, no?

KS: Out of fashion in Paris as well as New York, at least after that mid-50s late Monet revival. She felt that “old-fashioned” tag acutely, but she doubled down on that sense of color and nature, buying her home at Vétheuil with its gorgeous gardens and historical connection to Impressionism. Although it was van Gogh’s emotional intensity and profound respect for life that really defined beauty for her.

SR: Right—it is a concept of beauty deeply connected to the natural world and embracing cycles of life and death, and the ordinary as well as the sublime. She points us to the fact that looking closely at very small moments in nature can be a profound experience. She worked in small and large scales throughout her life, but generally she was taking on similar problems in both. But then in the late 1970s she makes a turn toward these really close, small views. So, for example, you have her becoming totally absorbed with a small patch of flowers in La Lande, a different way of looking altogether.

KS: Thinking about experiences available to a woman artist at that moment, one might be (as Mitchell’s therapist seemed to suggest) the ability to free oneself from grandiosity—to attend to the pleasure and profundity of everyday life. I don’t want to totalize around gender; even if her male painter peers were magnetically drawn to big statements, the New York poets—O’Hara, Barbara Guest, John Ashbery, maybe James Schuyler most of all—shared Mitchell’s capacity to love a flower or a tree as a handhold in the world. That capacity only grew over time—the Tilleuls, Amaryllis—and it really blossomed in the late 1970s and early 1980s, one of the most difficult periods of her life, alongside her largest paintings.

SR: Exactly, in the 80s, she’s moving back and forth between the close ups and the grand, wide-open vistas, the corners of her garden and the spectacular view overlooking the Seine from the hillside where her house sat in Vétheuil. Both experiences generated what she called “feeling” and both types of looking at nature show up in the paintings—the intimate and the immersive.

KS: Yes, those big three- and four-panel paintings with their sweeping horizontality, like Salut Tom, make you feel like you are inside a panoramic landscape; they are also decisively bounded, driven by complex internal relations. She would often start with a single panel or a diptych, and then frame it on the left and right to make what she half-jokingly told Linda Nochlin was an “altar-piece.” She intended those paintings to freeze or hold a moment in time, but they also hold a space. So they are also very much about painting….

SR: She uses that multipanel format in so many different ways, though she always said it was a practical choice, so she could make bigger paintings and still move them around the studio easily. In some instances, it’s a way of holding a panoramic space, as you say. In others, she uses multiple panels to create a pattern for looking, setting up a sequence left to right across three or four, or a back and forth between two side by side canvases. South has this strange doubling. She essentially made the same painting twice, each tackling the same problems in slightly different ways, and then she put them together in a diptych. So your eye bounces and compares, back and forth between the two. Absolutely a painting about painting, right?

KS: For sure. I am having a hard time not using the word “weird,” which doesn’t capture the assuredness and majesty of South. Maybe “risk-taking” is better. When we went looking for Mitchell’s late style, what we found was not a misty, meditative final five years, but paintings that are shockingly experimental in composition, in color and touch, driven by sheer will and her awareness of the limited time she had left. 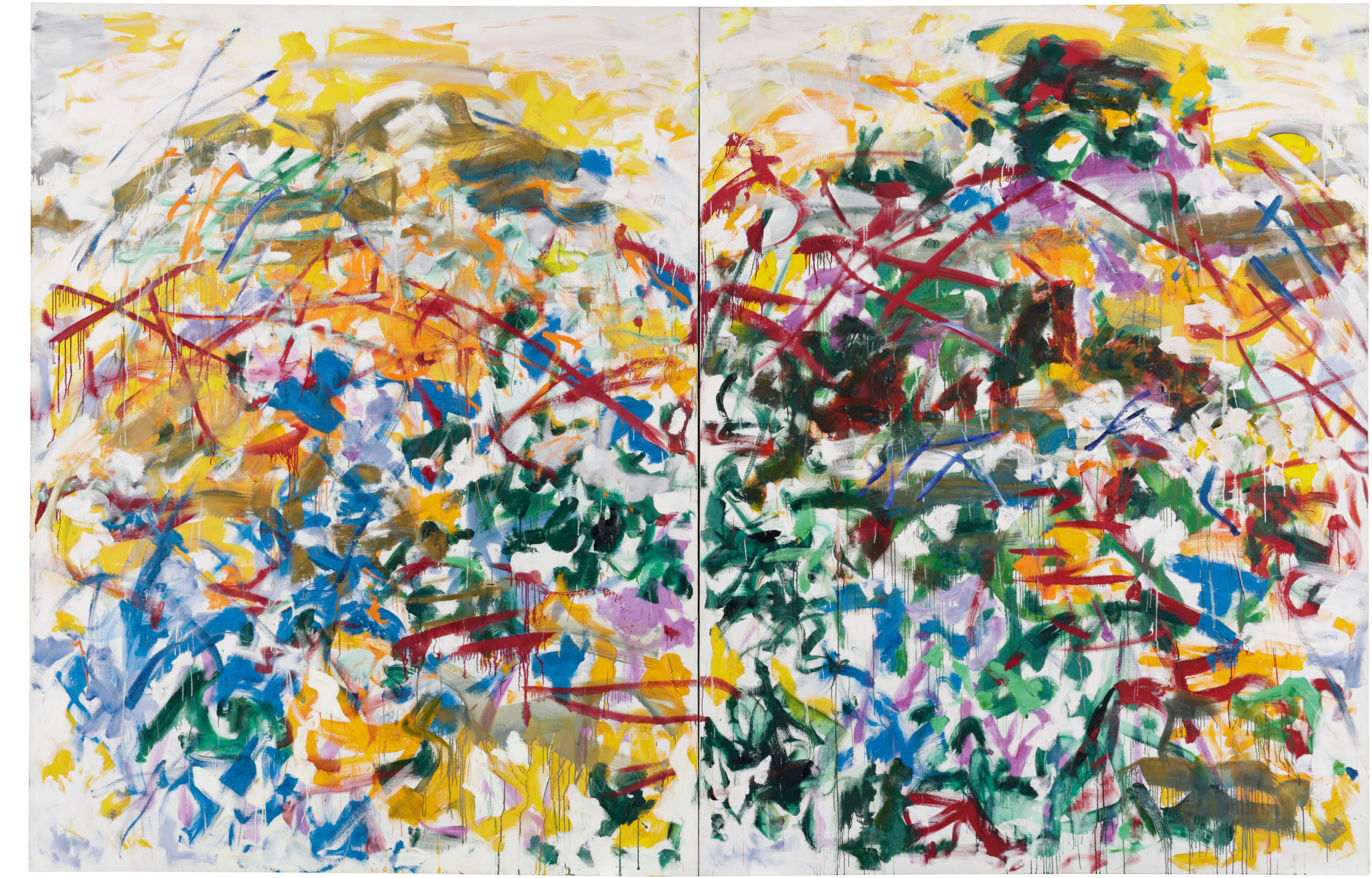 SR: There’s that great quote when Klaus Kertess asked her how she managed to keep painting given her illness late in life, and she answered “I just got up on that fucking ladder and told myself, ‘This stroke has to work.’” She knew the consequence of every stroke and maximized every ounce of energy in service of great painting. Do you think those late paintings have been misjudged?

KS: That line is always on my mind! That fucking ladder. Late paintings: not misjudged so much as not yet really addressed. I think we both hoped that the book would be a definitive (to date) overall statement on Mitchell, and at the same time, open up research avenues for countless focused approaches. There’s a lot of work to be done on Mitchell, across the career, and younger scholars—Marin Sarvé-Tarr, Elise Archias, Erin Kimmel, Amy Rahn, Matthew Holman—are taking that on.

SR: Definitely so much territory yet to study. My mind immediately goes to how Mitchell turned to face and take on Matisse, Van Gogh, and Cézanne very directly in some of those late works. We discuss it briefly in the book, but we just ran out of room! There is so much to think through with that group of works. lt is great to see the interest of young scholars, and here’s hoping that, when the exhibition opens, younger painters also find productive avenues forward in her painting.

KS: Cheers to that Sarah—during her lifetime Mitchell was deeply connected with younger artists, and extending that engagement is central to her legacy. I’m very much hoping that the exhibition, and the book, feel like a resource and also a revelation. 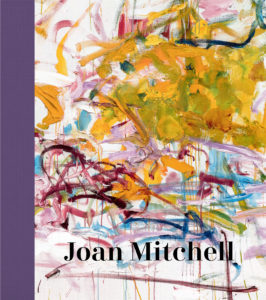 If you liked the conversation, you'll love the book.
Museum Store