In the 1950s, as abstract expressionism maintained its vice-grip over the art market, David Park, Elmer Bischoff, and Richard Diebenkorn met weekly to do something that was a bit subversive for artists of their caliber: they would draw the human form from a live model. The late-night sessions weren’t ambitious — Diebenkorn described them as “exercises in seeing” — but it was there, in artist studios above a Berkeley car dealership, that the Bay Area Figurative style took root.

The casual, sometimes revelatory drawings produced there form the heart of David Park and His Circle: The Drawing Sessions, a quiet complement to the museum’s expansive Park retrospective. Through 33 drawings, two sketchbooks, and a smattering of photos, the show aims to capture the experimentation inherent to the gatherings. It also extends Park’s legacy by emphasizing the artist, teacher, and friend who believed “close proximity to many talented people” was the most important factor in an artist’s education.

Take a look inside 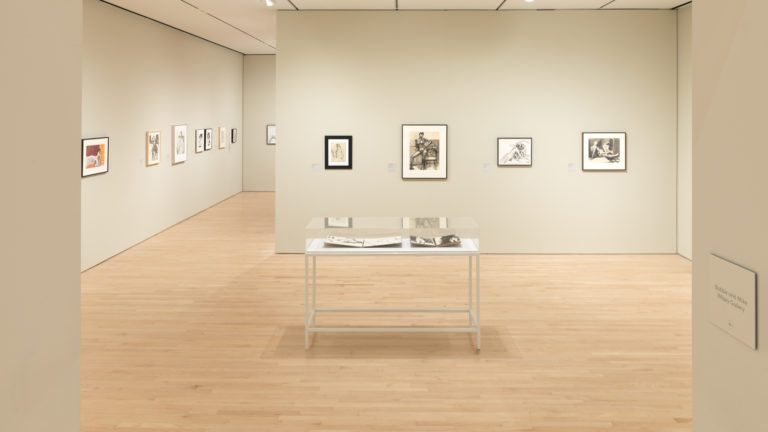 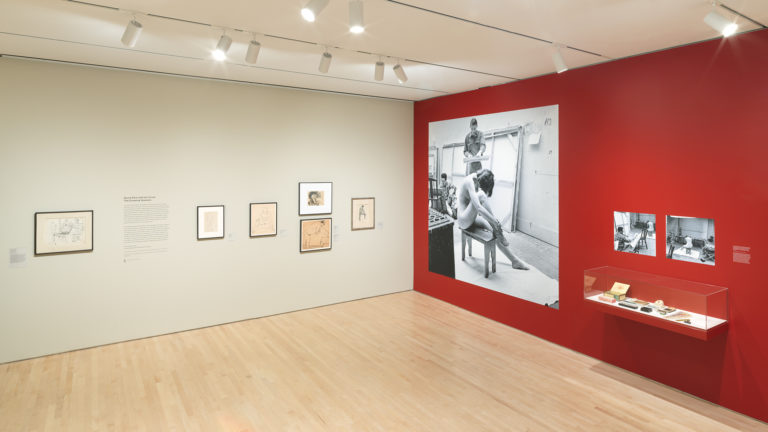 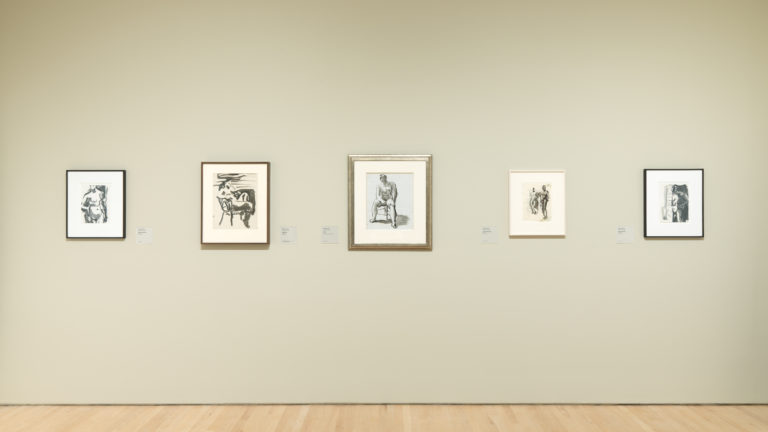 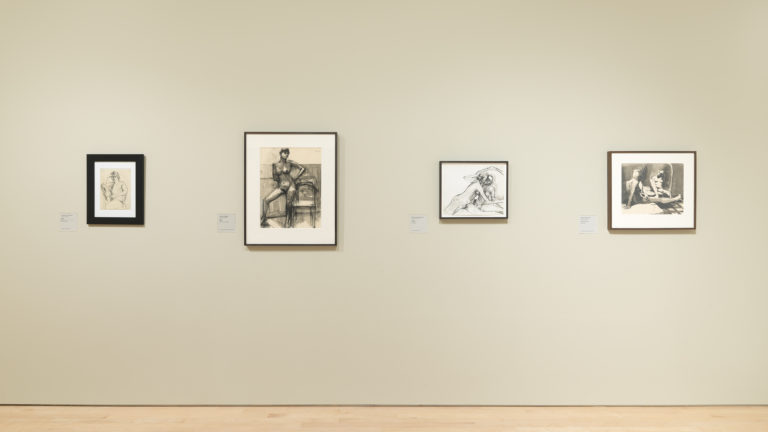 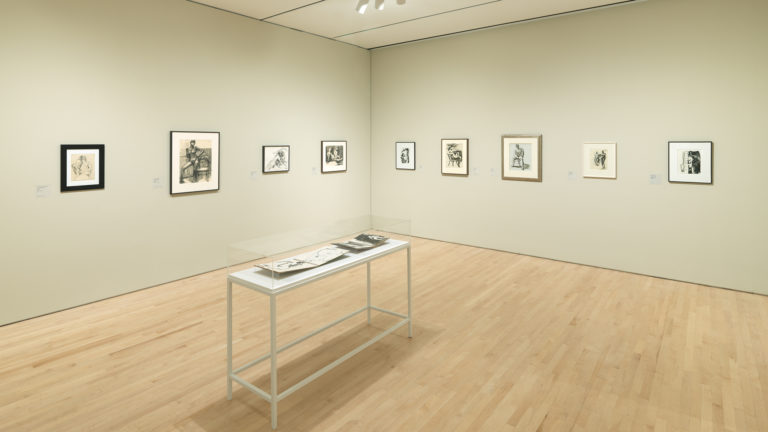 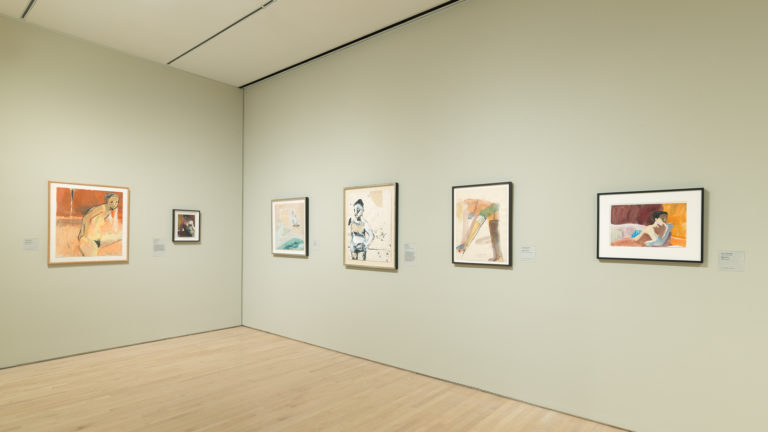 Sara Wessen Chang, curatorial assistant in painting and sculpture, organized the show with assistance from exhibition designers Jody Hanson and Sarah Choi. The largely thematic arrangement shows the progression of the Bay Area figurative style, which revived interest in depicting people and scenes from everyday life.

Viewers see the artists practice the contours of the human form in quick line drawings of live male and female models. If a model didn’t show up, the artists sketched each other — a special treat, considering these artists didn’t often dabble in portraiture. With ink, they examine how light and shadow fall upon the body. Then, onto color with gouache and paint in gestural brushstrokes that hallmark expressionism yet here are applied to figurative subject matter. Underscoring all of it is the permissiveness of the sessions; critics called it a “failure of nerve” when Park abandoned abstraction and lobbed his canvases into a local dump sometime around 1950. From the view in the gallery, the Berkeley studio becomes a crucial enclave for artists to flout the status quo’s aversion to representational forms. 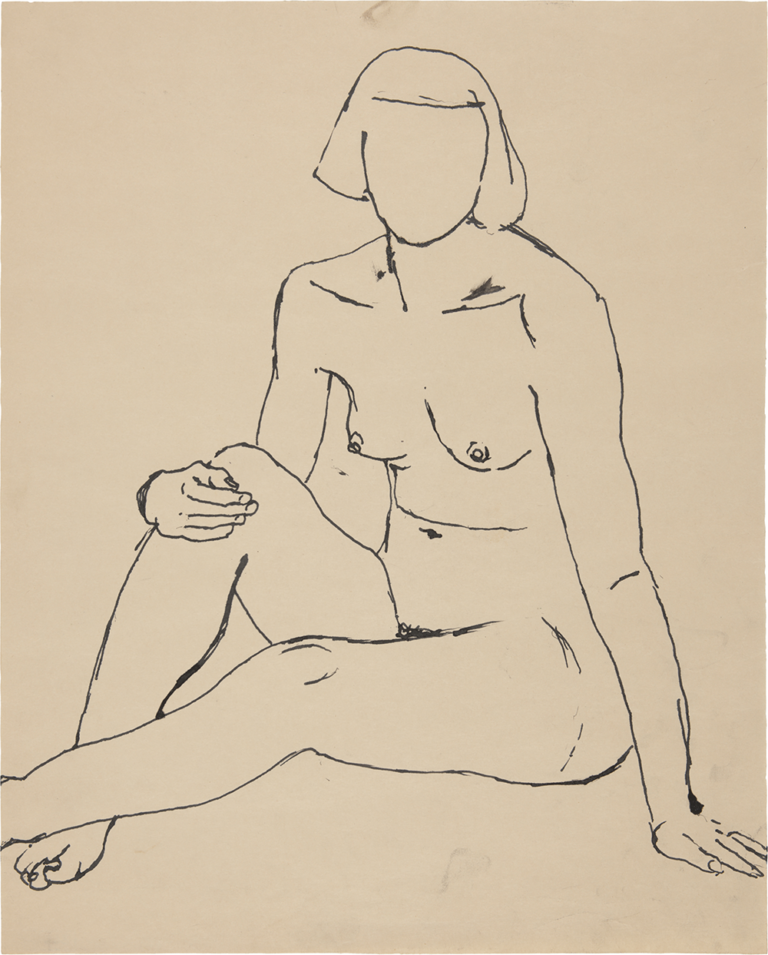 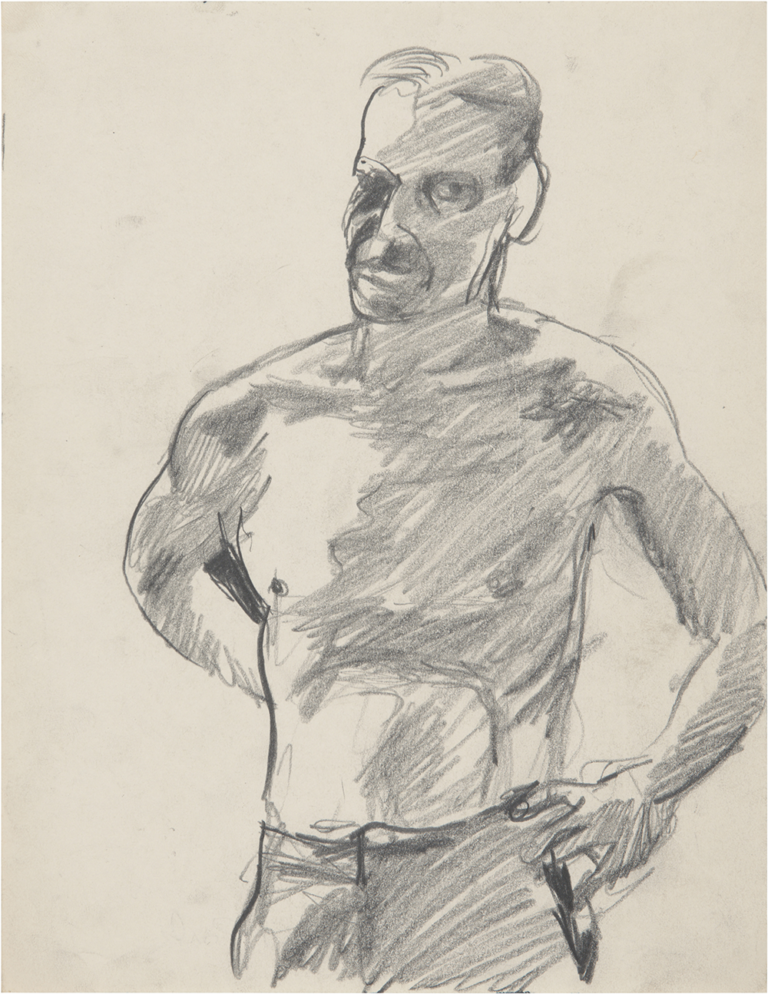 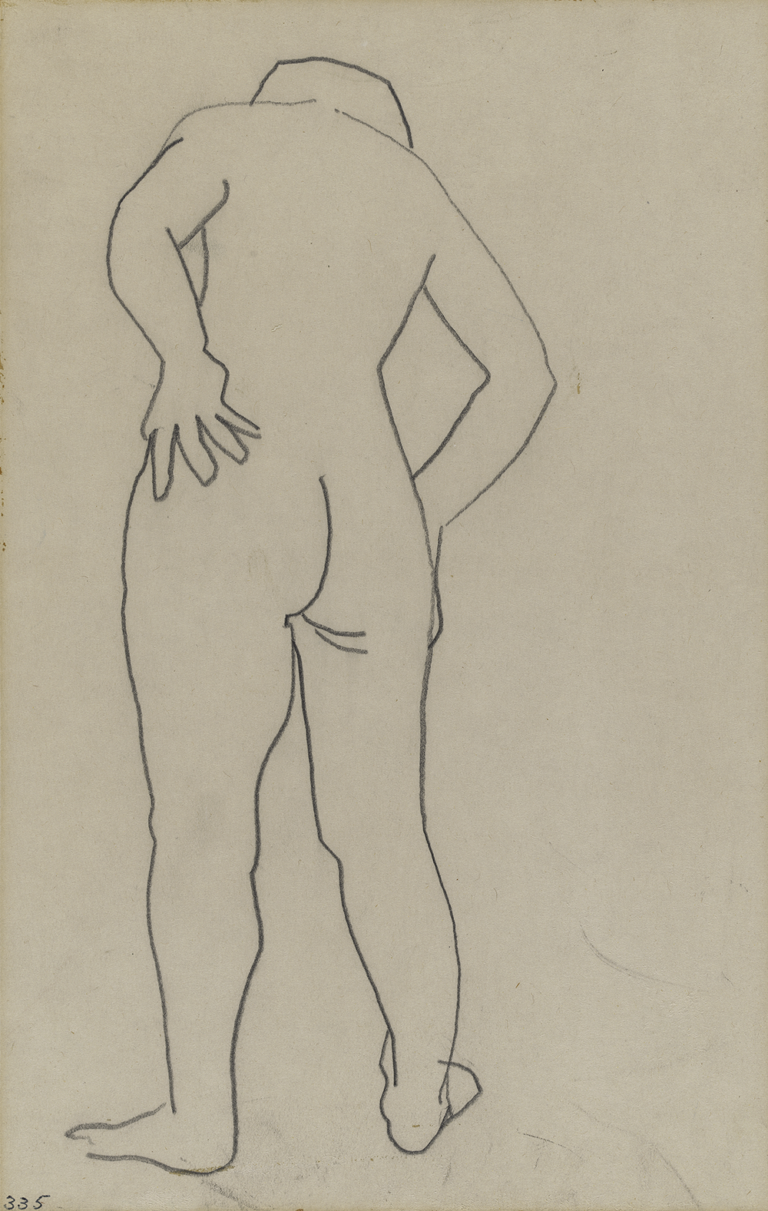 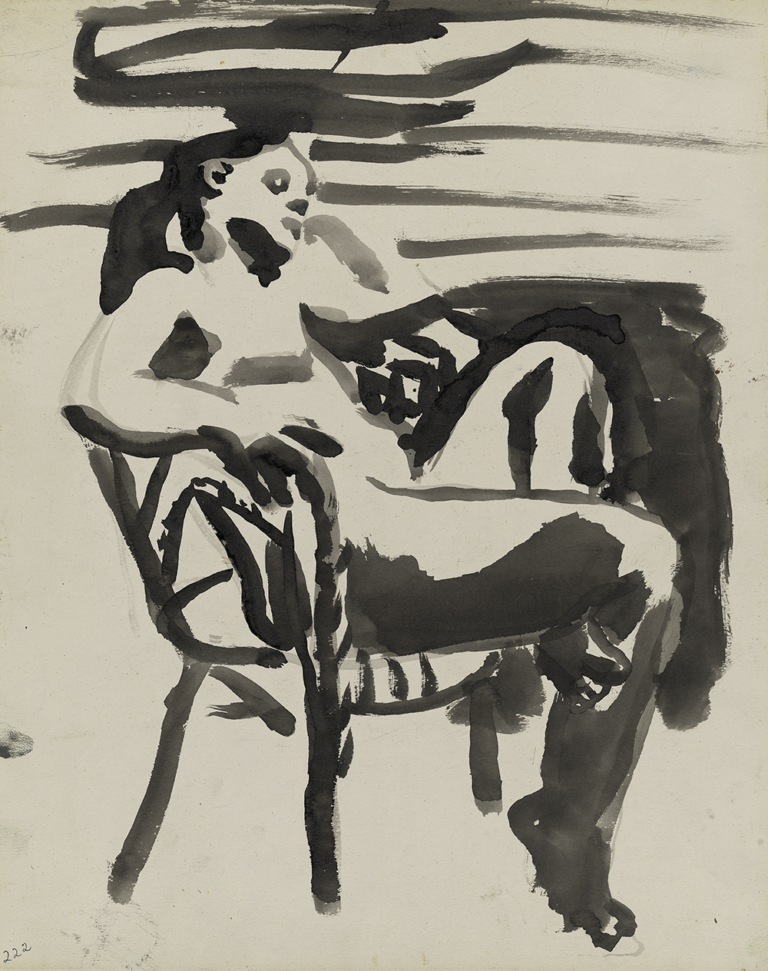 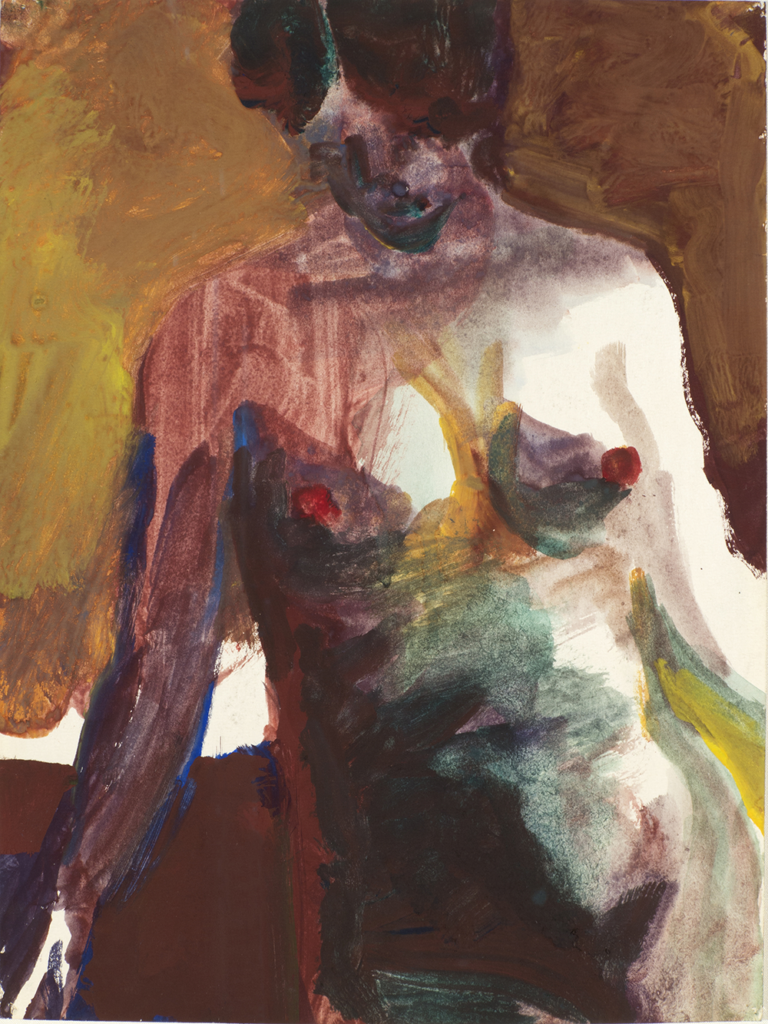 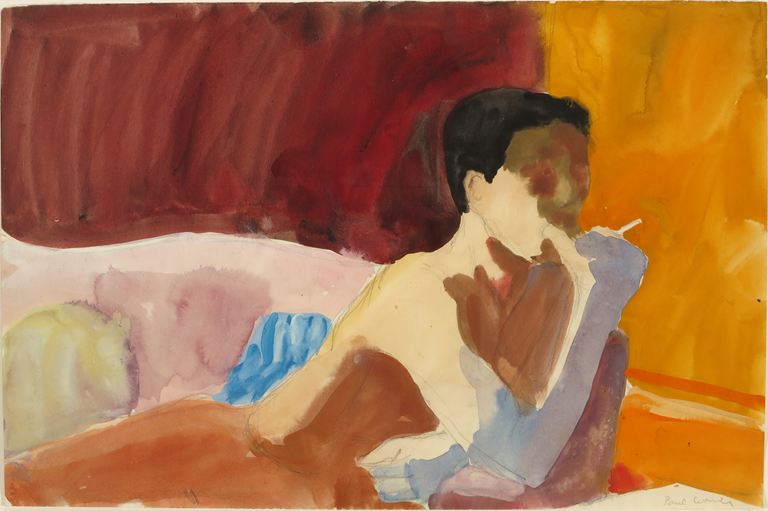 To create that environment, Wessen Chang, Hanson, and Choi chose a neutral studio wall color that offered warmth and complemented the works on paper, along with a deep red that further connects the presentation to the retrospective. They grounded the setting with a larger-than-life photo of Diebenkorn sketching a nude model alongside Nathan Oliveira, one of many artists who would join the sessions. Cases that display actual artist materials add coziness and authenticity. “I love to hear that there is a feeling of intimacy,” Wessen Chang said. “Diving into pockets of research surrounding these artists, there is a tangible presence of camaraderie in the letters, drawings, and photographs. No sense of competition whatsoever.”

The absence of competition is apparent in sketches featuring the same model by different artists, and it’s here where the works become particularly revelatory. A set of untitled drawings of the same seated woman, circa 1955, show Park’s intense shading and Diebenkorn’s quick, rough lines. “This comparison is as extraordinary as it is exquisite,” wrote curator Tara McDowell in an in-depth essay for the exhibition’s catalogue. “A rare opportunity to consider what each artist saw, how he rendered it, and what this might tell us about their respective art practices.”

Wessen Chang, meanwhile, was keen on incorporating works by second-generation Bay Area figurative artists like Joan Brown, whose inclusion represents a continued lineage. Brown was a student of Bischoff’s at the California School of Fine Arts (now the San Francisco Art Institute) and would go on to participate in her own drawing sessions. “Park’s drawing sessions were ad-hoc, after hours, and never included women besides the model,” Wessen Chang noted. “As ever, it’s crucial as curators to expand the story.” 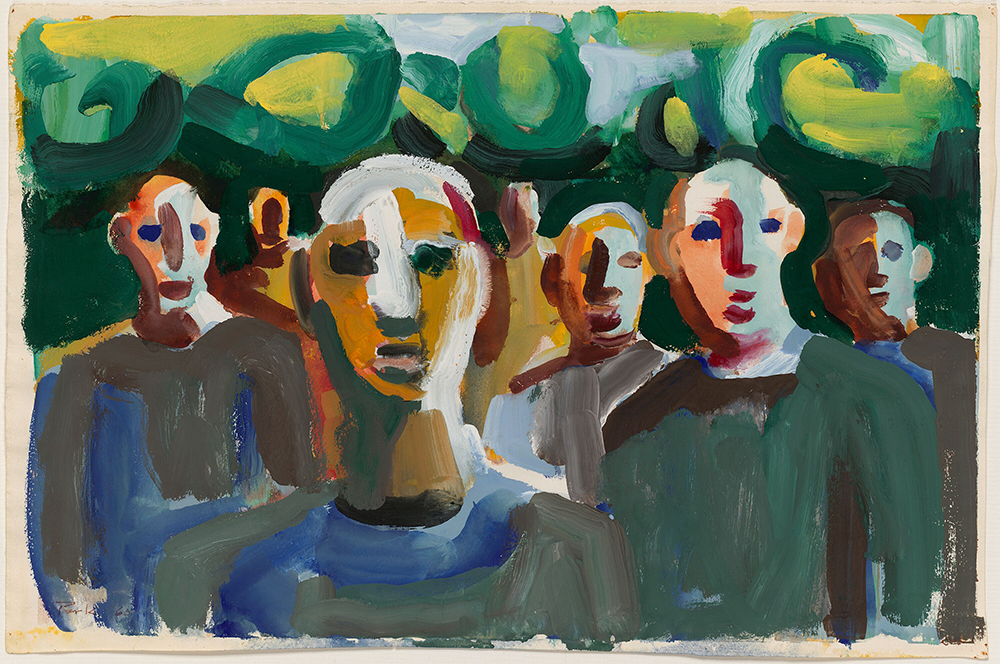 In this free online program, seven distinguished guests take the floor for seven minutes each to reflect on a work by the late David Park. 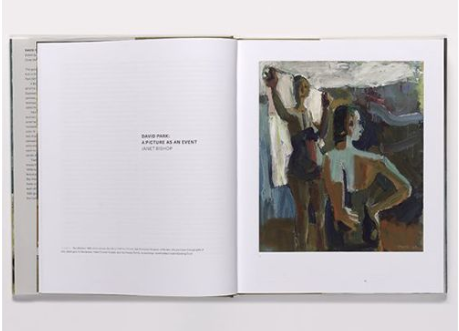 Audioguide for David Park: A Retrospective

Though the museum is closed, you can still learn about Park’s work and legacy through the online audioguide. 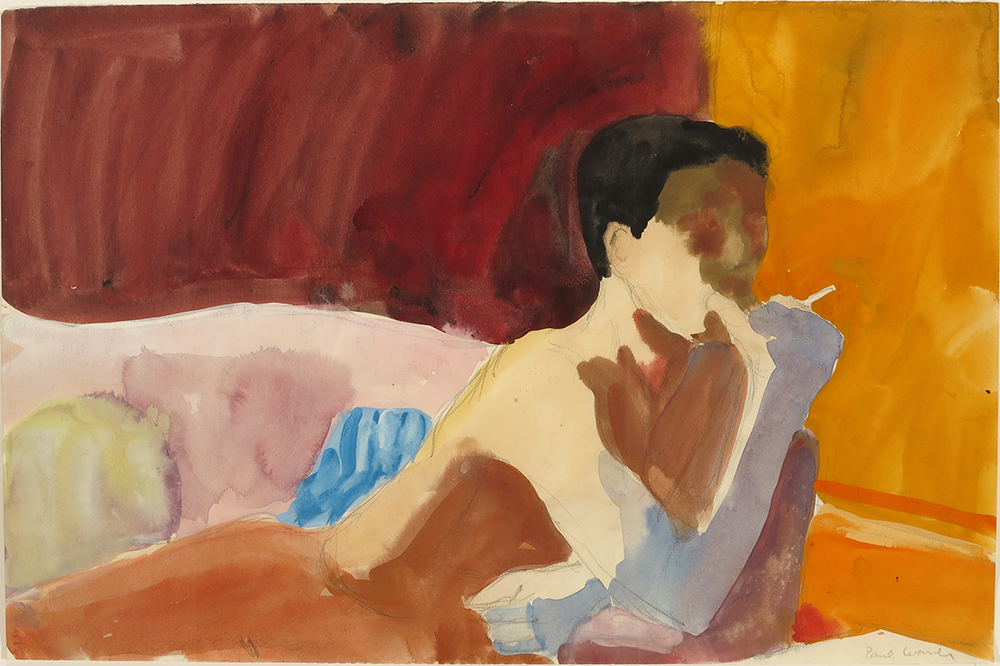 David Park and His Circle: The Drawing Sessions

Visit the exhibition page for David Park and His Circle: The Drawing Sessions.