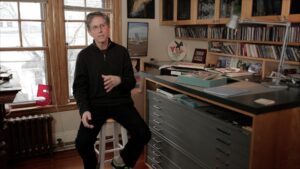 Ah, the 1970s. For some, a decade of dubious sartorial decisions. For others, like Mike Mandel, a decade of tremendous creative productivity. Mandel received his MFA from the San Francisco Art Institute in 1974 and immediately embarked on a plethora of projects, for instance his series of Baseball-Photographer Trading Cards, his motel photography project, and his very well-known collaboration with Larry Sultan, Evidence.

The decade inspired the title of his 2015 boxed collection of work from that time, Good 70s, conceived with the artist Jason Fulford, as well as the title of his SFMOMA solo retrospective currently on view. The show is in many respects an “exploded” version of the box. Mandel and Fulford originally imagined the box as a book, but it quickly became clear, recalls Mandel, that “facsimile editions of all the stuff would be more fun.” The physical box deliberately recalls an Agfa photo paper box, down to the label, and the title recalls Mandel’s tried-and-true way of keeping track of bodies of work he deems “good”: by putting them in empty photo paper boxes labeled with “good this” or “good that.”

But even though a box already breaks some of the accepted rules of art monograph projects, one obligatory element still loomed: the curatorial introduction, which serves to contextualize the artist and frame the publication.

Don’t get Mandel started on the topic of curatorial framing! “Every time I’m introduced to speak, for instance, there’s always this really boring introductory biography spiel that turns me into a great, accredited, acclaimed personality. And when you’re trying to get a curator to write an introduction for your book, there’s always a lot of hand wringing about what they’ll say, and they’re worrying about sounding smart enough, and how in-depth to go. Even the baseball card project was about hating to put things on a pedestal. Yuck.

“So anyway, with the Good 70s box, we decided to take the concept to the next level.”

The idea he and Fulford landed on was to approach Sandra Phillips, SFMOMA curator emerita of photography, to write the intro—but not just any old intro. She would imagine herself corresponding with Mandel back in the 1970s and write fictional letters from her younger self to his younger self. For her part, Phillips decided that the content would be entirely real except for the fact that the two hadn’t yet met at that time.

“But it’s entirely plausible that we might have,” she notes. “The world of photography was tiny then. When Mike did the photographer baseball cards, part of the joke was that there was indeed a kind of team, a small group of identifiable people. We all knew each other, or knew people who knew people in that world. So I knew what was going on with Mike’s work, even though I was a young person living in upstate New York. It wasn’t that great of a stretch to imagine that we were friends.” 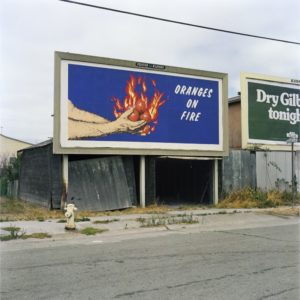 Mandel says that Phillips was the only logical person for this particular job. “SFMOMA has shown Evidence many times, and Sandy supported our billboards and has written extensively about my work and my collaborations with Larry Sultan. She deeply understands the ideas behind it all and is the only curator who is a real friend that I could go to for this.”

“Writing the letters was great fun,” Phillips recalls. In the first one, from “February 1971,” she mentions having seen the work of their mutual friend Robert Heinecken, as well as photographs by Ansel Adams, on a recent road trip in California. “It’s amazing to me,” she observes, “that they both live in the same state and both are called photographers.” In subsequent letters her new baby is born, the Vietnam War rages, Patty Hearst robs the Hibernia Bank, and she paints her creaky, drafty, twenty-three-room Victorian while the baby amuses himself in his playpen and Watergate hearings play endlessly on the TV. (It’s difficult to read the letters and not think of today’s political situation with its shades of “fake news.”)

She references numerous projects Mandel has “mentioned” in his “letters” to her: the billboards (“March 1973”), the Myself: Timed Exposures (“November 1972”), the Seven Never Before Published Portraits of Edward Weston (“October 1973”). That last one she’s skeptical about at first (“I just don’t get it”) but by “April 1974” she’s “grown rather fond of it.”

“Sandy’s letters are wonderful!” says Mandel. “There are many funny moments. She showed she was happy to make fun of herself a little. To my knowledge she hadn’t done anything fictional before. I was so appreciative. It was a wonderful act of generosity to become vulnerable in that way.”

Lindsey Westbrook is a freelance editor and writer specializing in art, architecture, and design. Her clients include SFMOMA, Istanbul Modern, UC Press, Princeton Architectural Press, Kunsthalle Basel, the Museum of Contemporary Art Detroit, the Felix Gonzalez-Torres Foundation, and many others.
Read more