In Conversation with Erin Shirreff

Erin O’Toole: Your exhibition is part of an ongoing series called New Work. Much of the work in the show has never been displayed before, but the most obviously new pieces are two bronze sculptures, one large-scale and one small, that represent your first forays into the medium. What did the material enable you to do that you hadn’t done before?

Erin Shirreff: I was interested in bronze because I wanted to cast—to create a trace of a material that would still be present in the final object but that, for practical reasons, couldn’t exist in the final form. So the sculptures are very evidently bronze—they have the art historical weightiness of bronze—yet they carry the physicality of the original material, which is foam core, a material that I have used pretty consistently in my studio for the past ten years.

I also really wanted the larger work to sit directly on the gallery floor. I have often made sculptures that sit on pedestals, which have a more pictorial relationship to the viewer. The big bronze work here has a more bodily relationship, because you’re standing alongside it, sharing a sense of gravity, and that emphasizes its physical strangeness.

EOT: What was the process for making the large bronze sculpture?

ES: The sculpture is called Maquette, and its origins are in a body of work that I started making a number of years ago. I was looking at images of large-scale mid-century sculptures in old anthologies collected from used bookstores and making my own small-scale renditions based solely on those pictures. I was absorbing the language in a general way, so they were very nondescript “mid-century” forms. Structurally they were very janky, makeshift objects—I was using hot glue and foam core or spray-painted cardboard. They were also frontal, because I was making them specifically to photograph.

I would then take the photographs of these maquettes and, through a very basic splicing and compositing process on the computer, conjoin two different halves at the center margin of the photograph, like the Fig. photographs in the exhibition. I stored all the maquettes over the years, and more recently, when I was thinking about making something with a different, very provisional physicality, I unpacked them all and started looking again at their materiality and the hybrid forms they created across the centerfolds of the photographs. I liked the idea of trying to render those digitally composited forms in real space. It was about trying to make something that had only ever existed in the picture plane stand on its own in real life.

EOT: So you gave the foundry a full-scale foam-core maquette that was then transformed into bronze?

ES: Yeah. I broke it down and shoved it into the back of my car and drove it up to the foundry. [laughs] When I reassembled it, they said, “Let’s Instagram this,” and I said, “No, thanks.”

ES: There are many ways, nowadays, to enlarge something through scanning technology, but I wanted the maquette and the cast sculpture to have a one-to-one scale, so the dents in the foam core from my handling of the maquette would be directly translated. But it’s funny—when I was making the foam-core structure I was using hot glue as my join, and a hot-glue seam, when you cast it, can really look like a standard metal weld. So some aspects of the material translation can be a bit confusing.

EOT: Often with cast bronze you miss the sense of facture, of the artist’s hand, and it can seem a bit remote. I feel like your pieces have a sense of touch to them that I don’t see so much in monumental sculpture of the past.

EOT: I don’t know if it’s because those marks are present, or because it has a slight sense of instability to it. It’s sitting on the ground, and it’s certainly stable, but it has a precariousness that makes it appear light, even though it is clearly very heavy. It’s an interesting duality.

ES: I feel that, too. I was actually surprised by how heavy the smaller sculpture was when we were handling and placing it.

EOT: Do you want to continue working in bronze?

EOT: Do you have some ideas for how you want to move forward with it?

ES: Well, as soon as you start making things that can feasibly go outside, you start thinking about scale. This is tricky for me because I like to work with materials that I can handle myself. Even though I worked with a fabricator here and relinquished a lot of control, I still wanted to be able to put my arms around the process and work with material that I could source myself, bring to my studio, and shape myself. I work alone in my studio, which I like, so to go any bigger would require some adjustments. But I’m curious about how that smaller sculpture would feel if it were at a scale where you could walk under its arches. What would it feel like to have something that had a very precarious quality, as you say, but that was more physically imposing?

EOT: What do you see as the connection between the bronze works and the photographic works in the show? Are there overarching themes that you planned or that you’re seeing more now that they are together in the space?

ES: They all allude to objects that had a currency in the past. I like reframing or looking again at things that have had their moment but that still exist everywhere with us now. When you encounter a large-scale modernist sculpture in a park or in a corporate plaza that was made in that era and that was probably really unconventional and surprising at the time, what remains of that experience now? How do our contemporary bodies experience those works? I like thinking about what is left and what is lost there, as well as about the possibilities in new translations and confusions. I still love looking at those old sculpture anthologies. The pictures can be so crazily, profoundly mysterious. I think about the new stories you can make with this stuff from the past—the imaginative space you can carve out of this material.

EOT: I’ve heard you use the word “uncertainty” when talking about your work, which I think is a really good word. Each of the various types of work that you have included in the show plays on uncertainty in some way, whether it’s the uncertainty of scale or the uncertainty of whether something is a picture or an object, a sculpture or a photograph. In your work there is a sense of familiarity—references to modernist forms—but you undercut it in a way that people may not be entirely aware of. Your work makes viewers stop and wonder what they are looking at, forcing them to think in a way that maybe they wouldn’t have if the work were more straightforward.

ES: I will say that I never intend to be tricky.

ES: It has become cliché to talk about the erosion of attention spans these days, but I end up thinking about it a lot because it affects the experience of looking and seeing, which I think can only truly happen with time and patience. Creating moments for direct, prolonged encounters—allowing for or encouraging a slowing down—has always been central to my work, which is maybe one reason why this uncertainty of materiality or image keeps surfacing. It can destabilize and extend what is otherwise a very familiar invitation, as you say. But I come to it without this intention in place; it’s a byproduct of my studio practice, moving from page to screen to metal and back again.

Excerpted from an interview conducted at SFMOMA on July 17, 2019. 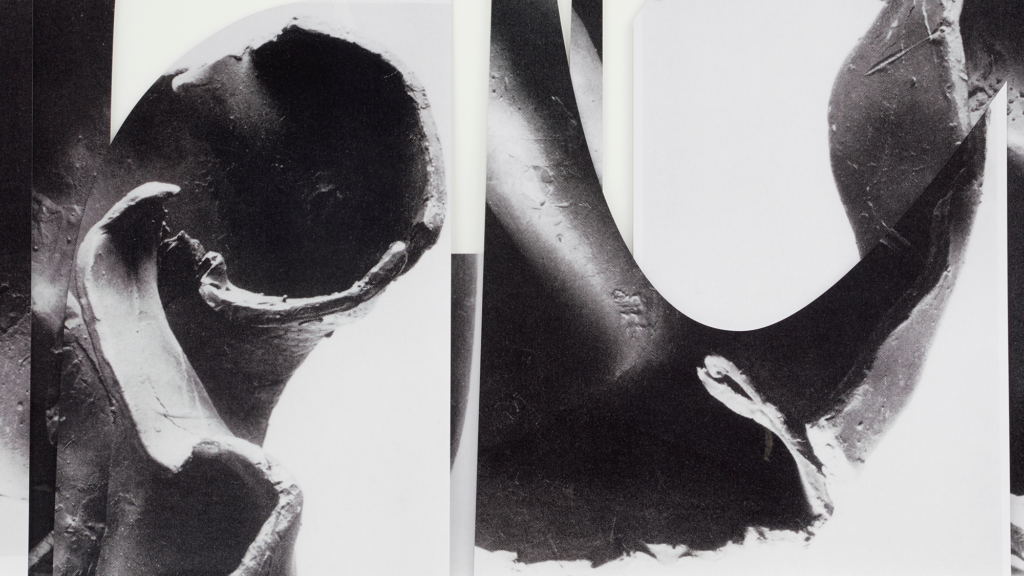