“It’s Like Being in the Picture”: The Dominion of Light at SFMOMA

The French title, L’empire des lumières, is ambiguous in translation, becoming either “empire” or “dominion.” In our catalogue, Sandra Zalman discusses the distinction: “While an empire exists in relation to a ruler, a dominion does not necessarily require this.”

Throughout his career, the Surrealist painter René Magritte (1898-1967) painted from his home. His most Surreal creations were crafted from his living room and kitchen studios, so it’s perhaps unsurprising that even sleepy mundane residential streets had poetic power for Magritte. SFMOMA will present a gallery that allows you to step into Magritte’s world, an immersive space showcasing the incredible imagery of Magritte’s most famous residential streets.

In a series of paintings, each entitled The Dominion of Light, Magritte depicts a sleepy residential street, a row of ordinary houses where street lamps glow and light shines through empty windows. Above this quiet nighttime scene is a daytime sky—a striking, impossible collision of night and day that makes the ordinary extraordinary.

Magritte created this image 27 times in his career, in oil and gouache, and in slightly different dimensions, but always with the same haunting, glowing effect. In René Magritte: The Fifth Season, there will be six oil paintings and one gouache hung together in one gallery—the largest and the smallest versions, horizontal and vertical compositions, each offering a different view, a different house, and a new set of colors and juxtapositions to view. And this mysterious street isn’t just a painting subject for Magritte; a fraction of it crops up in another painting in an adjacent gallery.

All of this may sound as though Magritte’s vision for the series was planned in advance, but The Dominion of Light was not originally planned as a major series. In fact, his thorough investigation of this scene was prompted by a bit of accidental market demand.

At the 1954 Venice Biennale a version of The Dominion of Light in a Magritte retrospective proved so desirable that it was promised to three separate buyers, and ultimately sold to Peggy Guggenheim.
Magritte painted four versions of
The Dominion of Light—one for each of the potential patron who went home empty handed.

Though the multiple 1954 versions were created to remedy a specific mix-up, Magritte was clearly drawn to the image’s mysterious poetry, painting variations for more than a decade. In his 1956 Guggenheim Prize speech, Magritte spoke to the Dominion of Light specifically, saying: “I find the evocation of night and day is endowed with the power to surprise and enchant us. I call this power poetry.”

Given how important the series clearly is in Magritte’s career, it’s even more surprising how infrequently the images are exhibited together. Until now, there have only ever been three oils in the same place at the same time—and that was 50 years ago. In René Magritte: The Fifth Season, there will be six. It’s a once-in-a-lifetime gathering made possible by generous and enthusiastic lenders.

According to Gary Garrels, Elise S. Haas Senior Curator of Painting and Sculpture, and Caitlin Haskell, Associate Curator of Painting and Sculpture and curator of René Magritte: The Fifth Season, no gallery in this show has required so much diplomatic work to create the presentation, but it was absolutely worth the effort. Garrels is thrilled these masterpieces are coming together for the first time in San Francisco.

“These paintings were not conceived of or developed in the same manner as Monet’s grain stacks, for example, but they can lend themselves to this type of configuration,” explained Haskell. “It’s not that this idea is so exceptional—people have wanted to give this a try—but the difficulty in assembling the loans is such that it hasn’t been attempted until now, fifty years after Magritte’s death.” 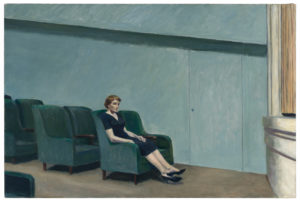 The particular staging of these canvases in a single gallery within The Fifth Season will reveal subtle differences between the works and amplify the immersive qualities of each of these paintings. It has never been possible before to compare the works directly, creating an unparalleled research opportunity to see the development of an idea across Magritte’s career. Are the skies the same color? What of the glow of light in the houses? How did the houses change?

The canvases are large—most are over three feet wide or tall, including the gargantuan Guggenheim version that is over six feet in height—and all are devoid of human figures, which makes it possible to imagine yourself inside this scene. They present eerie, empty places reminiscent of other quiet nighttime scenes being produced around the same time in America, by artists such as Edward Hopper. Magritte and Hopper share a similar interest in the lone protagonist—for Hopper, it might be a woman in an empty theater, as in SFMOMA’s Intermission, while in Magritte’s Surreal world, it’s a seemingly-alive street lamp on an empty street. 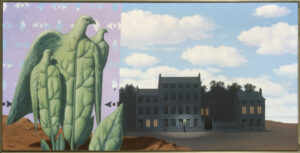 In the 1950s, Magritte created several murals in Belgium, including a 360 degree panorama entitled The Enchanted Domain. Several models for this project will be displayed at SFMOMA.

Creating an immersive exhibition space resonates with other work Magritte was producing around the time he painted this series. That’s why the curators moved forward with this particular display configuration for the series, according to Haskell.

This unique, unparalleled presentation of this series will allow an audience to experience this mystery in a dedicated, immersive space. Just as Magritte found himself stepping into his pictures, museumgoers will enter a Surrealist world by walking into this gallery. Surrounded by The Dominion of Light, visitors will bear witness to the power of art to create magic and the power of light to reveal it.

Though the scene he depicted over and over in Dominion of Light seems impossible, full of magic and mystery, Magritte believed real life offered such beauty. He once remarked that the villa where he lived “is surrounded by gardens and the houses looking directly on the boulevard Lambermont stand out against a wide sky. In the evening, it’s like being in the picture— The Dominion of Light.”

Alex Zivkovic is a Project Research Assistant in Painting + Sculpture at SFMOMA. A recent graduate of Stanford University, Alex is a writer and editor based in San Francisco. Academically, he is interested in Surrealism, animal studies, and queerness in modernist media and will pursue a PhD in Art History and Archaeology at Columbia starting Fall 2018.
read more