It’s Not Not Art: An Interview with the Curators of Nam June Paik

Opening May 8, 2021, Nam June Paik is the first-ever West Coast retrospective dedicated to the visionary multimedia artist who bridged art, music, performance, and technology in groundbreaking ways. Here, the exhibition curators Rudolf Frieling and Andrea Nitsche-Krupp discuss key works in the show and reflect on the artist’s lasting legacy.

SFMOMA: I’m curious about Paik’s enthusiasm for collaborations. It seems he saw himself as an outsider, but was drawn to Charlotte Moorman, John Cage, Fluxus, and others.

Rudolf Frieling, curator of Media Arts: When he started his artistic career, Paik was in exile from his native Korea. He was a stranger in post-war Germany who grew up under Japanese occupation and sometimes spoke a mix of languages all together, and he would always stand out as someone who wouldn’t ‘belong’ there. I think he compensated by aligning with a dedicated group of avant-garde artists. People who met him said, “what an extraordinary personality,” and “what an energetic artist.” He clearly had a quality of making things happen, of energizing people. Paik has really never gone out of fashion, but for some reason he has never had a major show on the West Coast. We thought it was time we correct that. 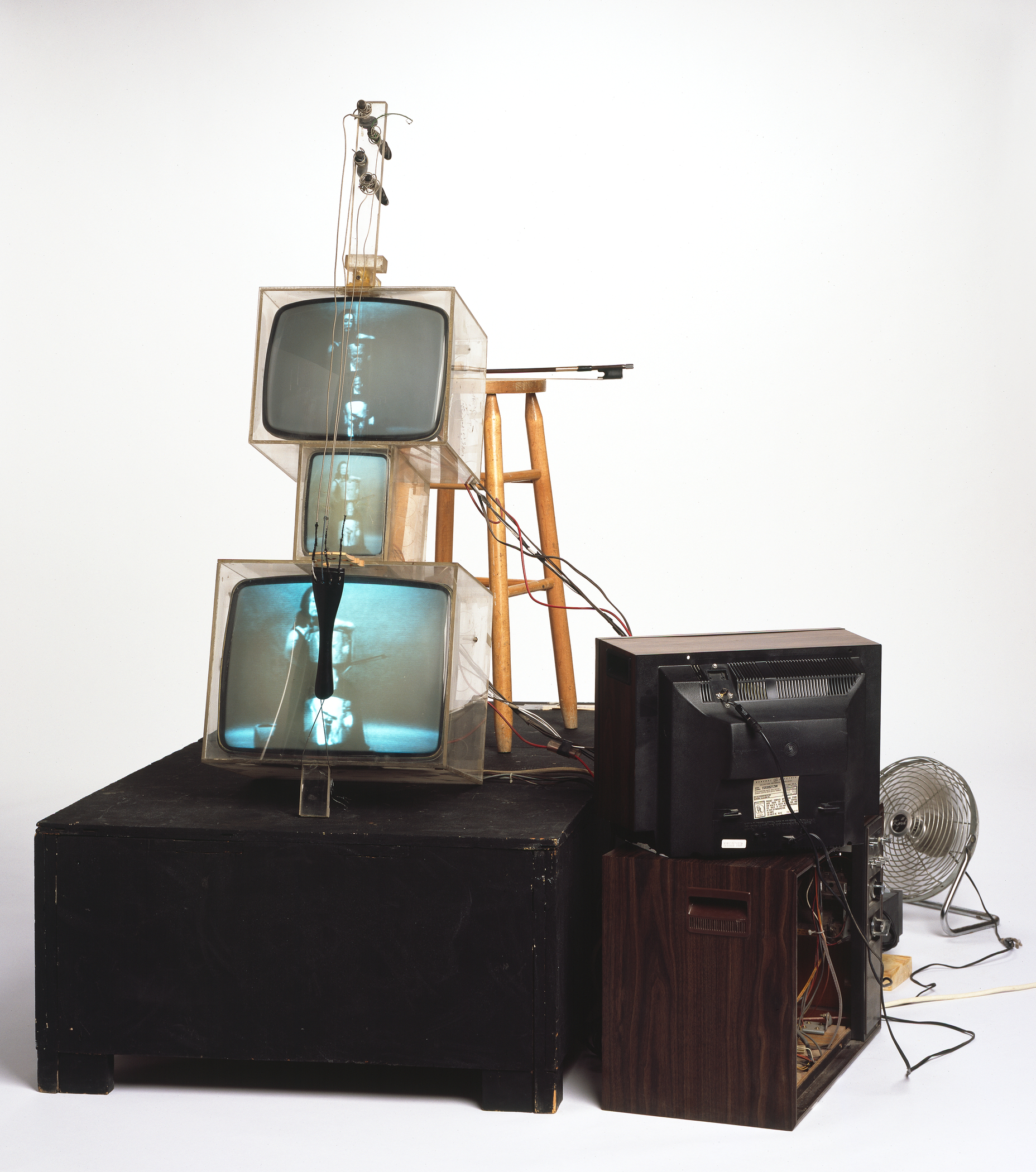 SFMOMA: What was Paik looking for when he met Charlotte Moorman in the 1960s, and what did she bring to his practice?

Andrea Nitsche-Krupp, assistant curator of Media Arts: We are devoting an entire gallery to the collaboration between Paik and Moorman. They worked together for almost 30 years and shared a sort of antiestablishment attitude despite their formal classical training — Moorman was a Julliard-trained concert cellist, and Paik started his career as a composer.

Paik famously said in 1964 that “sex is very underdeveloped in music as opposed to literature and optical art.” In Moorman, he found a kindred spirit and game collaborator to push the boundaries between music, sexuality, and performance.

There’s the famous incident in 1967 when Paik and Moorman performed Opera Sextronique—their solution to the lack of sex in music — which resulted in Moorman’s arrest for indecent exposure and salacious headlines in the New York papers. In the four-part cello composition, Moorman was to wear various costumes before ultimately playing nude with a fake bomb turned into a cello. The police got wind of this and stormed the stage before Moorman could complete the performance.

Paik felt responsible, so he made clothing for Moorman as a way of getting around the indecent exposure issue while still pushing the limits of art and sexuality. He made a TV bra and TV eyeglasses for her. TV Bra still was provocative, but above the law. Both are in the exhibition, along with fantastic, rare footage of their performances.

RF: TV Cello is one example where we apply Paik’s quote, “Is it music? Well, it is not not music,” from his manifesto Post Music.

Paik reacted not just against classical music but against his training as a composer — or, in Moorman’s case, against her training at the Juilliard School — to create something new, something not seen before, and a nude cellist was definitely not something you would see at Carnegie Hall. 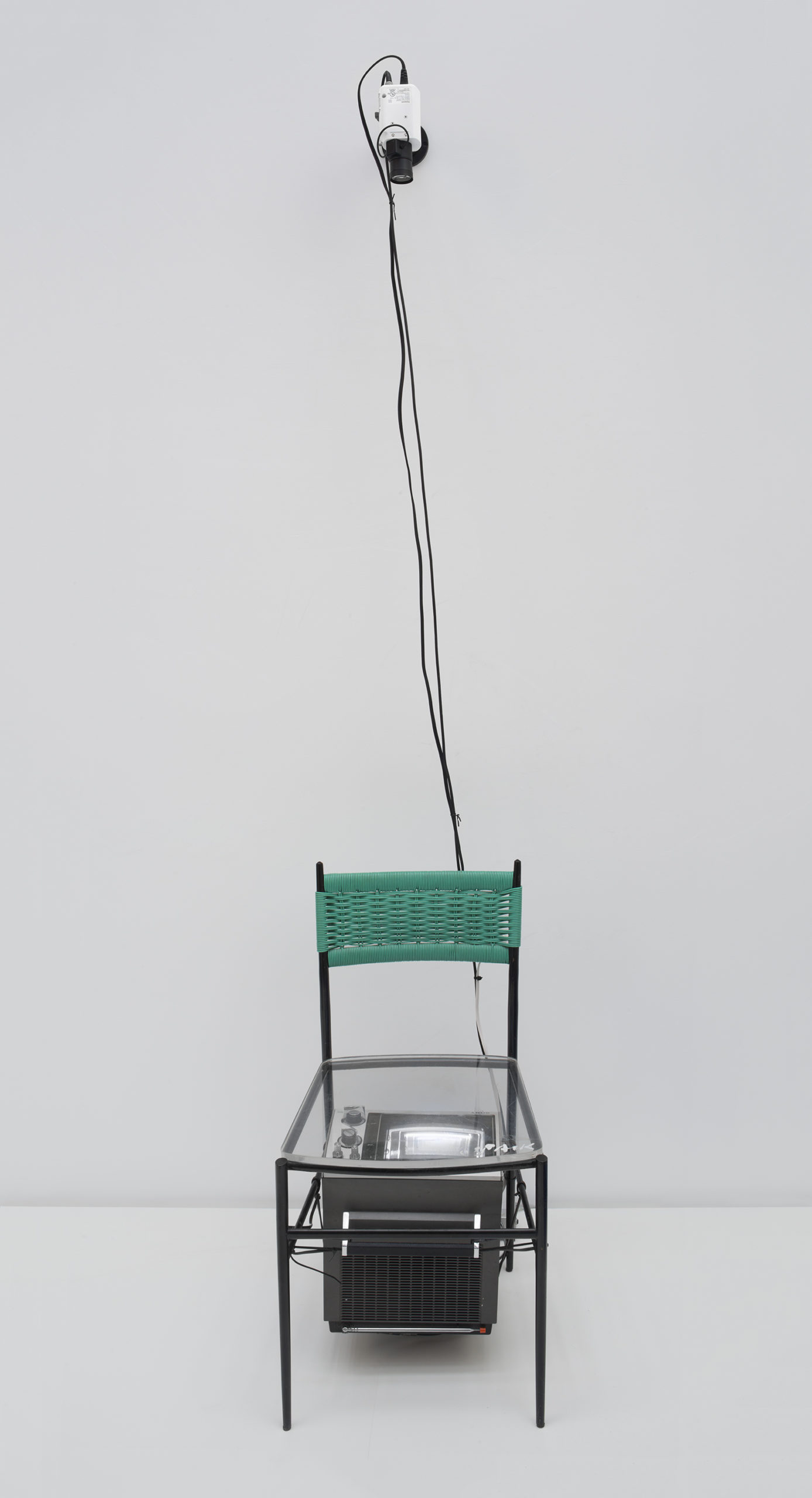 RF: TV Chair is one of Paik’s iconic early video sculptures from the ’60s, and we were extremely proud to acquire this piece for SFMOMA’s collection in 2020.

It is humorous — not to the extent that our visitors can sit in the chair and experience their own image being broadcast against their backside, but in the idea that we like to mirror ourselves, that there is an inherently narcissistic quality to taking pictures. We see that in the culture of taking selfies today. In TV Chair, Paik embraces the idea that you could immediately play with the representation of an object, person, or action in this absurd gesture of sitting on a television that shows you from the top. Keep in mind that in the ‘60s and ‘70s, even seeing yourself on a television set was mind-blowing. One did not simply show up on television. That was inaccessible for most people.

ANK: TV Chair is accompanied by a small print from our collection called Do you know…? . It presents a “utopian” mid-century suburban living room with a couple sitting watching TV, but Paik has drawn in TV Chair underneath each seat, asking, “How soon will TV Chair be in most museums?”

RF: And when will that be in every museum? At last, TV Chair is in our museum. 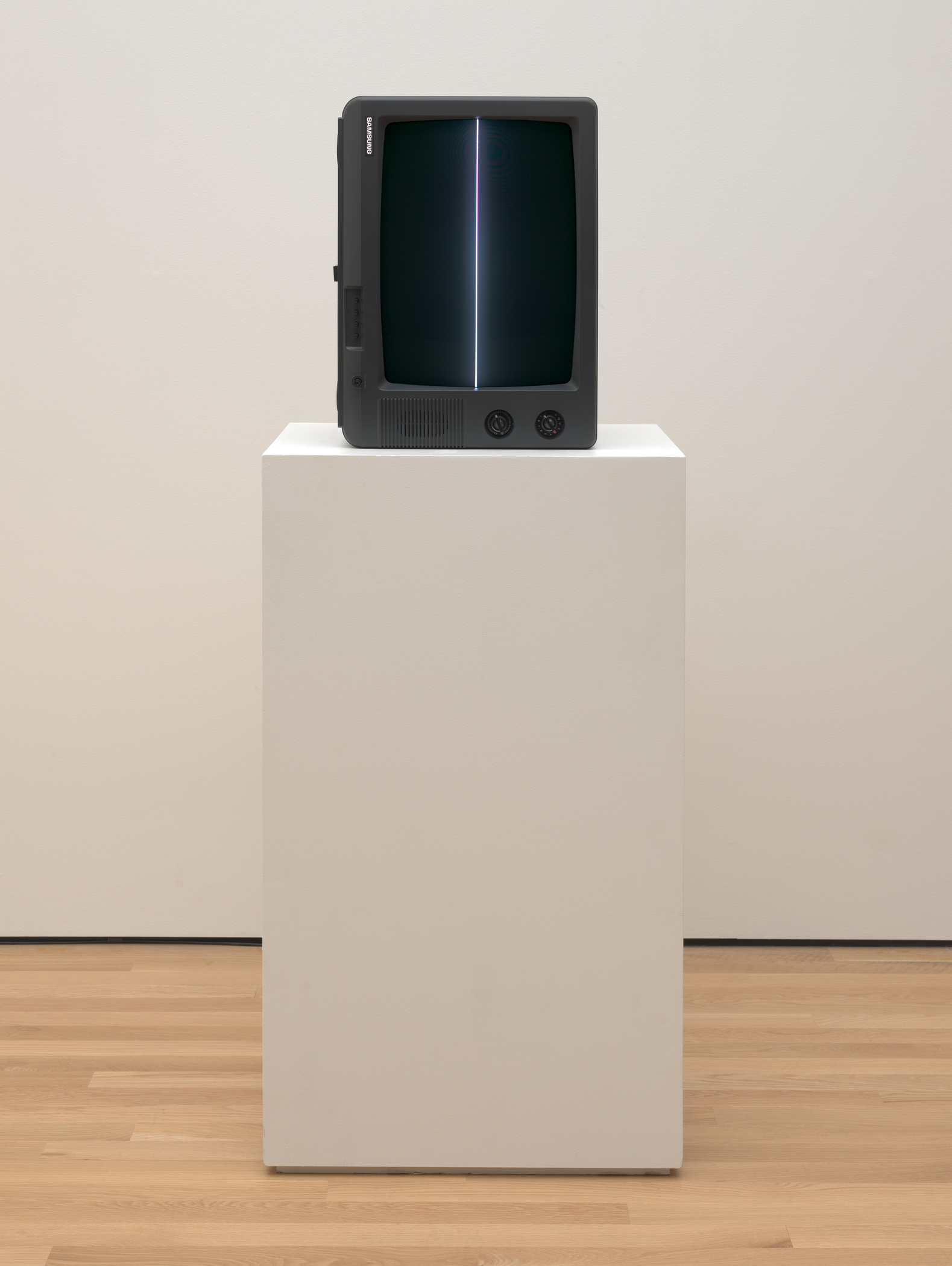 ANK: Paik credits his interest in Zen to his lifelong friendship and collaboration with the composer John Cage, and this work specifically recalls Cage’s 4’33”, an entirely silent composition in three movements which takes in whatever random, ambient noise occurs during those four minutes and 33 seconds.

Like 4’33”, the content of Zen for Film is contingent upon its setting: a reel of blank film is projected onto a white screen, so if you see anything at all, it is the incidental stuff that accumulates on the film material — dust, dirt, scratches — or on the screen such as your own shadow. Zen for Film is open to everything around it, similar to Robert Rauschenberg’s White Painting [three panel]. It’s simple enough that you get a sense of it right away, but when you slow down and take it in, you are rewarded by that not-nothingness. 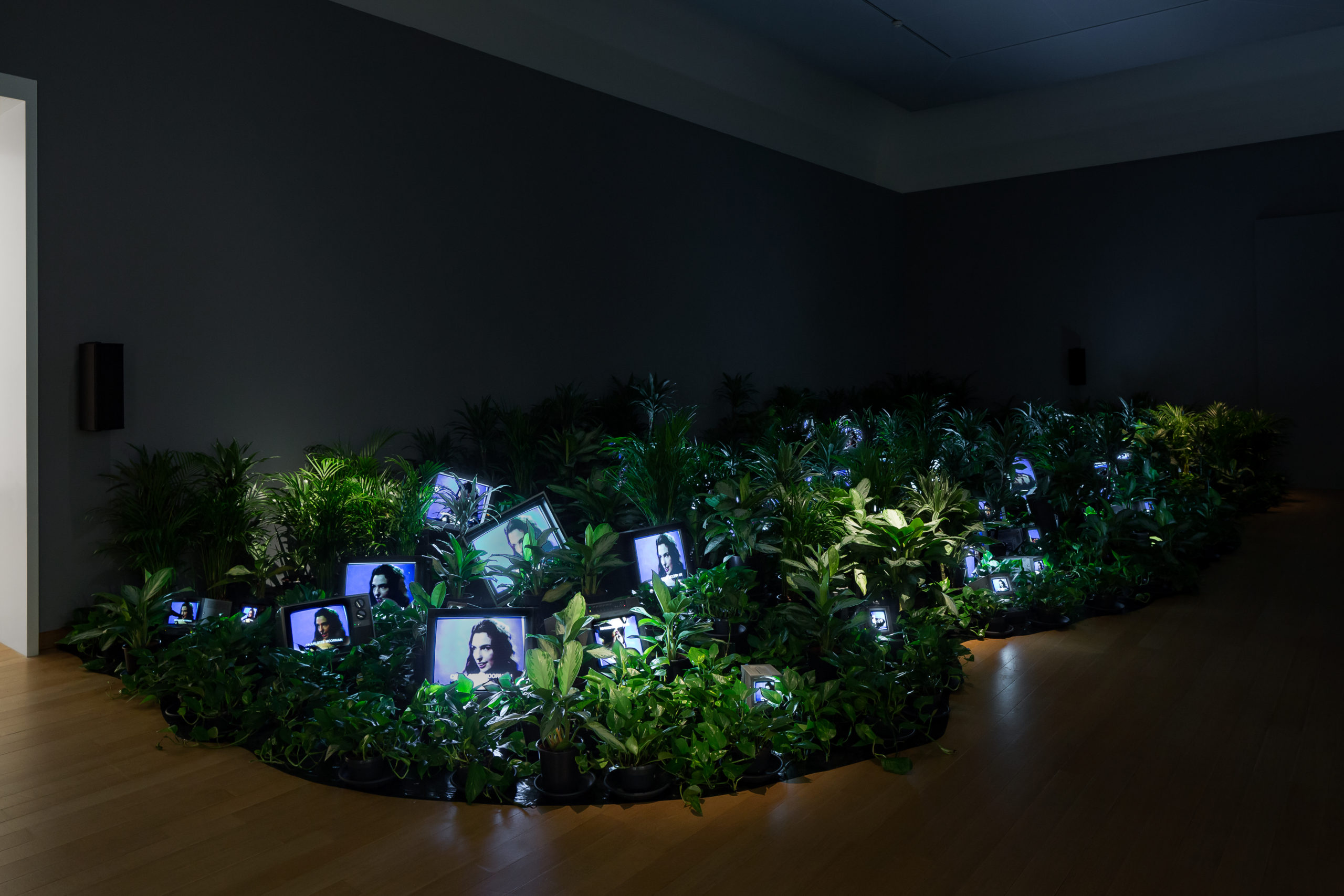 RF: TV Garden is a room-size installation. With this work, Paik would densely mix live plants with “live” cultural artifacts, meaning his videos on television sets. You walk through a garden where the flowers are images, and the sounds include John Cage, Allen Ginsberg, and his circle of friends who just keep popping up throughout the show. This video playing in this installation, called Global Groove, has arguably prefigured a whole future generation of MTV-style clips.

IT RAINS IN MY HEAD AS IT RAINS ON TV

ANK: Well, we wanted to be sure to really encompass the breadth of Paik’s practice. He’s not just a video installation artist: he painted, he made elaborate collages, and this piece is an example of a really beautiful, small drawing that points to another career through his career — his interest in text.

He was an avid reader and writer, and spoke many different languages he’d often interweave. This work, It rains in my TV as it rains in my heart, references that most famous Paul Verlaine poem: Il pleure dans mon coeur / Comme il pleut sur la ville, or, “It rains in my heart / As it rains on the town.”
This equating of his lived experience with what’s happening on TV is already fascinating, even before considering the poetry and language he uses in expressing those connections.

RF: Paik would not make a distinction between himself and television. It just goes through him, and he did not see the need to separate himself from information in general. He was an avid reader of newspapers, obviously an avid watcher of television, and he probably would have become an enthusiastic Instagram user had he seen the day of Instagram.

This juxtaposition between nature and culture, or technology and the human being — for him these are not juxtapositions, but a productive relationship. 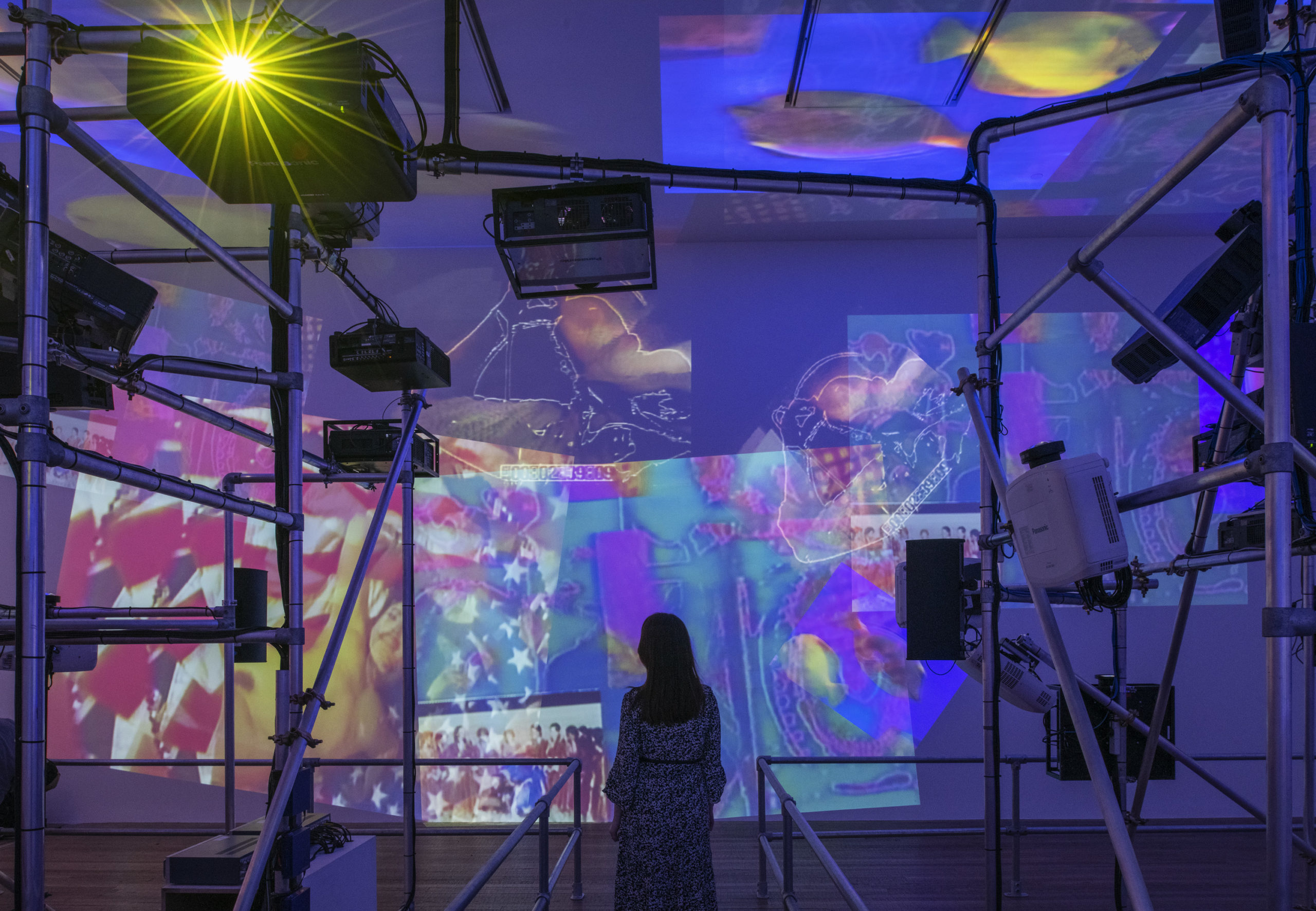 RF: Very few people have actually seen Paik’s Sistine Chapel. The Venice Bienniale in 1993 had Paik’s very site-specific installation in the German Pavilion, but remember, the restoration of the actual Sistine Chapel in Rome by Michelangelo had just aroused intense emotions and debate in the years prior. It was a major debate when Paik arrived, How could a Sistine Chapel possibly have these colors?

When we started planning this show, it was our ambition to bring something to the retrospective that would actually be new, that would be unique, and a reconstruction of the Sistine Chapel was our answer to this ambition.

Sistine Chapel is the highlight of the exhibition — it’s the ‘bang’ before you exit. The creation of this immersive environment demonstrates Paik’s artistic mastery, and it summarizes and remixes the components of his career you will have just walked through.

Paik had no problem mixing everything and anything. It was his signature, literally, all folded into his fast-paced, complex, high-colored, and exuberant mix of electronic images. Some even called it “electronic wallpaper.” What I find fascinating is not only the images themselves — complex, fast and loud, sometimes silent — but his way of treating those images. He literally threw them on the walls, blurry, distorted, overlapping, and interfering with each other.

ANK: We tackled many unique conservation questions for this show — Paik is an artist who early on established that his work should be upgraded with whatever new technologies arise over time. It’s not about the specific material, that fetishized object, but about the work. It can evolve over time, and to Paik it was natural that it would.

RF: His main goal in installing this electronic Sistine Chapel was to give us a sense of complete 360-degree immersion, including the ceiling, which, according to Paik, is one of the most neglected parts of modern architecture. The ceiling has information. It’s not just architecture, and that’s what he was trying to amplify.

Think about the world of television, where we have a wealth of channels at our disposal and we just keep zapping through them. That’s a random mix in itself, and then each channel is a random mix of formats and genres. Paik’s appropriate response was to embrace that mix, and he did that by devaluing single images to emphasize and amplify the flow of images.

We sometimes feel we need to understand everything. For him, it was more important to be open to what he called the gestalt, the overall impression. It wasn’t necessary to catch every reference, as long as you got the flow. 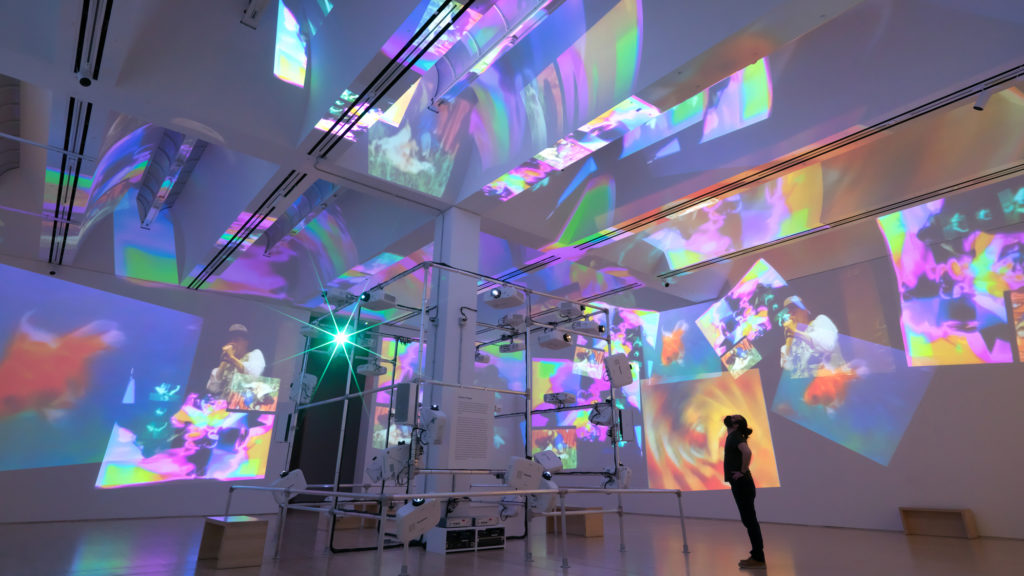 A mesmerizing riot of sights and sounds, Nam June Paik brings together more than 200 works by the visionary experimental artist who bridged art, music, performance, and technology in groundbreaking ways, and whose influence is still felt in the art, pop culture, music, and film of today.