Leading the Way to LEED Gold

It’s a lovely May day, and I’m up on the roof of SFMOMA’s new ten-story building, about to get a private tour of the guts of the structure. Chief engineer Jeff Phairas unlocks an enormous enclosure that houses — to pursue the metaphor — the building’s respiratory system. Of course most museum visitors never think twice about the air they’re breathing, but the registrars on staff spend considerable time monitoring the galleries’ air quality, temperature, and humidity. As discussed in a previous piece, these numbers are crucial to the welfare of SFMOMA’s collection; additionally, the museum’s adherence to desired levels is required in order to secure artwork loans for temporary exhibitions.

Phairas likewise cares immensely about the physical side of the new building, since throughout the multiyear process of its design and construction, he was one of the key individuals charged with ensuring that it could maintain the rigorous LEED Gold standards into perpetuity. According to San Francisco’s Green Building Ordinance, passed into law under then-mayor Gavin Newsom, all new construction in the city must be certified at least LEED Gold. Minimizing energy expenditures was the single biggest task during the new SFMOMA’s construction, given the size of the building and its many precise lighting and environmental requirements.

The building really does live and breathe for Phairas. It’s been about a year since the new structure opened to the public, and he says its current state is a mostly known quantity, although it still occasionally exhibits a new behavior. (I immediately imagine a racehorse whose parentage is impeccable, but whose personality on the track is still in the discovery phase.) He and his team spend about half of their day monitoring the EMCS (energy management control system) from their computer screens, where custom software shows them in real time the temperature and humidity of hundreds of independently monitored interior spaces (as well as other data, for instance the health of the Living Wall). They spend the rest of their time on the move, watching how those readings are influenced by actual live conditions.

“Sometimes I’ll see a sudden spike in a particular gallery and run up to investigate,” says Phairas, “and realize it’s simply because a guard is standing in front of the sensor. So I’ll ask them to please stand a bit to the side. We’re all still learning.”

As we walk (and occasionally duck, as there are pipes everywhere, carrying not just air but also chilled water, steam, and both potable water and collected rainwater) Phairas mentions that the LEED Gold certification is official, just as of this week. “We knew academically that it would happen, but it’s still a very happy moment.” We joke that otherwise they’d have had to tear the building down and start over.

He shows me the two enormous fans that pull air out of the building, part of the original 1995 construction, and they seem bigger than the engine rotors on a passenger jet. Imagine, he says, the human and machine power required to replace one of those. Whereas the airflow through the system that feeds the new building is powered by a “fan wall,” with twenty-four much smaller motors running in concert. So if one — or even several — go down, it’s no big deal. And they’re easy to swap out because they’re of a manageable size.

The apparatus is basically an enormous swamp cooler (the technical term for it is “adiabatic” or direct evaporative cooling), as big as a studio apartment. It’s an ingenious setup devised by Taylor Engineering, the primary firm responsible for the new building’s systems, that takes advantage of San Francisco’s mild climate to condition the air destined for the building’s interior with the least possible energy expenditure. To Phairas’s knowledge, it had never been deployed in a museum before this.

“Steve Taylor convened a group of his peers, described his idea, and asked them for a critique,” Phairas recalls. “And they decided that it would absolutely work — here in San Francisco, that is. Not in a place that is hot or very humid for a large part of the year.” The passively conditioned air (in other words, requiring not much energy to condition) is fed into the galleries, offices, and basement after being treated as needed with minute amounts of heat (from hot water) or cooling (from the massive air conditioning units in the basement).

He opens a series of doors to reveal the sequential stages the air passes through. The first compartment of the unit simply opens to the outside via wide-louvered vents — you can see the city through them. Opening the next door over reveals the first set of filters and adiabatic mechanisms. The wind here is now getting stronger, and noticeably damper. As we approach the end of the enclosure, Phairas mentions matter-of-factly that the last set of doors will stay closed, since the air pressure in there is so strong it’s unsafe.

Instead, we peer through the windows and see the motors churning away in near silence.

Besides the city’s Green Building Ordinance, another crucial instigator behind this innovative system was, interestingly, the National Endowment for the Humanities, which has taken a strikingly forward-thinking stance with its (relatively new) Sustaining Cultural Heritage Collections award. Jill Sterrett, SFMOMA’s director of collections, and her team recognized that the engineering acrobatics required to attain LEED Gold status would be of interest to the wider museum field, and that an NEH grant would bring with it opportunities to tell the story to peer institutions. Of course the $300,000 grant was a minor portion of the total construction effort, which ran to the hundreds of millions, but it was an inspiring spark for the creative and dramatically collaborative thinking that involved architects, engineers, art conservators, and many more.

“There were so many standout ‘aha’ moments among the various team members — moments that absolutely changed the way we think about how we work,” Sterrett recalls. “Our primary pitch to the NEH, since the grant is to support cultural heritage, was about our desire to have the entire photography collection — representing the countless black-and-white and color processes invented since the medium was born in 1839 — live on site.” And thus the desire to somehow design the building’s overall energy budget to accommodate the extra electricity required for a very large walk-in refrigerator maintained at 40 degrees Fahrenheit, the optimal temperature for storing color photography.

“But the grant is about more than that,” continues Sterrett. “There’s nothing inherently groundbreaking about having a huge freezer in the basement. What is groundbreaking is to enable ready access to this important photography collection and to uphold the highest standards for its care in a way that also meets twenty-first-century demands in terms of your building envelope, your budget, and your resources. We want to see SFMOMA, as a museum, contribute to progressive change in sustainable building across an array of industries throughout California and the world.”

The project was written up as an NEH White Paper and evaluated at a wrap-up roundtable on September 9, 2016. The latter reconvened the parties who attended the initial sustainability roundtable in 2012 (in which the seasonal set points and other game-changing environmental measures were first discussed publicly). Further, many of the parties involved are publishing within their respective fields to broadcast their insights and takeaways.

Says David Heinzerling of Taylor Engineering: “The prestige and size of the project make the fact of continuous seasonal adjustments in humidity and temperature very significant in our field. So many of the strategies we devised for SFMOMA, for instance recovering heat from process cooling loads to preheat domestic hot water, are very interesting. We’ve used this system approach on two museums now and plan to continue to use it on future ones. And we’re planning to publish our discoveries in our professional journal, ASHRAE.”

Shruti Kasarekar from Atelier 10, a firm specializing in sustainability optimization that cooperated every step of the way on the new building with the architects, engineers, and conservators, notes: “The energy conservation strategies developed for SFMOMA represent a new generation of thinking that addresses the crux of the high-energy-use issue in museums — the ‘elephant in the room’ of museum sustainability. Many of our past projects relied on making systems as efficient as possible without necessarily questioning their underlying design and operation. It helps tremendously that we have an example to share that is of SFMOMA’s scale and level of international recognition, and we have been citing it as a case study at industry conferences.”

The many appendices of the NEH White Paper — detailing LED lighting specifications, fan power calculations, even a whole page of nothing but HVAC component abbreviations (!) — may be opaque to the lay reader, but it’s a treasure trove of shareable knowledge that the contributing parties plan to carry with them and deploy in future undertakings. The pages enumerate in detail the key new approaches that cumulatively led to the shiny new sign above the door: LEED Gold certified.

Lindsey Westbrook is a freelance editor and writer specializing in art, architecture, and design. Her clients include SFMOMA, Istanbul Modern, UC Press, Princeton Architectural Press, Kunsthalle Basel, the Museum of Contemporary Art Detroit, the Felix Gonzalez-Torres Foundation, and many others.
read more
Scratch the Surface 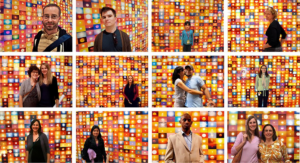 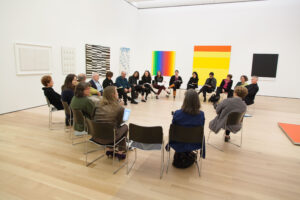 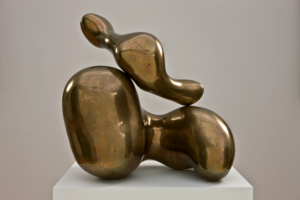 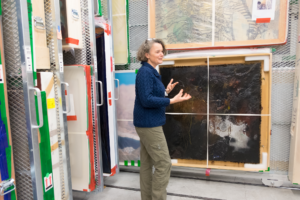