Christopher Night,‘Magritte’–This Is Not the Whole Picture, 1996

In 1996, Christopher Knight wrote a review of a Magritte show at the Armand Hammer Museum of Art in Los Angeles. While his review praises many aspects of the show, he devotes a great deal of attention to the absence of Magritte’s “bizarre, long-suppressed 1940s pictures” which he believed was a fatal flaw of this presentation.

“Their absence from the Hammer show diminishes its entertainment value — not because the missing period is necessarily great, but because it represents an inescapable development that can no longer be ignored.”

In March 2018, shortly before her own Magritte exhibition opened at SFMOMA, curator Caitlin Haskell happened upon this review and read its decades-old call-to-action. It became even more clear to her just how long the art world has needed attention cast on Magritte’s 1940s — a period of change, turmoil, and great insight into the heart of Surrealism. Fortunately, she had always envisioned that René Magritte: The Fifth Season would actively highlight these decades, opening with Magritte’s wartime experiments as an essential way of understanding Magritte as a painter, artist, and Surrealist in the mid-to-late 20th century.

Magritte asked himself, and now the exhibition asks us: what use is painting such scenes in the midst of war? What use is beauty amid chaos?

During the German occupation of Belgium, Magritte changed his point of view on the Surrealist movement. Surrealism did not rattle society; Nazism did. As war devastated Europe, René Magritte wrote in a letter to André Breton, “the confusion and panic that Surrealism wanted to create in order to bring everything into question were achieved much better by the Nazi idiots than by us.” To respond to the changes of the 1940s, Magritte believed Surrealism had to change too. Over the next decade Magritte produced two sets of revolutionary experiments that barely resembled his earliest art. Those sets of paintings are now known as his sunlit and Vache period.

Though there were drastic visual changes, these creative periods did not represent a clean break from his earlier paintings. Some of the images he created were directly lifted from earlier drawings or paintings while other new compositions still reflected an intense desire to confront mystery and truth in painting. Only now the quality of the paint itself became part of that mysterious presentation. The underlying impulse to estrange and intrigue remained, but his new experiments also asked how colors and paint quality affected ways of seeing and, consequently, making meaning.

Long considered aberrations, dismissed as terrible or immoral in their time, the sunlit and Vache period works are essential for contextualizing the historical world in which Magritte lived and also the ends to which he employed stylistic experiments throughout his career. As a painter who was also a commercial artist, Magritte had a different relationship to the notion of artistic hand — rendering images in a variety of styles as suited his client needs. Thus, in his art, he was able to create a series of styles that nevertheless consistently preserved his unique Surrealist sensibility. As such, a gallery of works from these two periods opens René Magritte: The Fifth Season, an exhibition focused on where Magritte’s work went after his break with the Surrealist group in the middle of his career.

The term “Renoir period” is also used because his paintings look like those by Pierre-Auguste Renoir (1841-1919).

In the midst of fighting and the destruction of society and nations around Belgium, Magritte found a painting style that seemingly embraced the light. In a short time, his painting changed from a dark color palette to one filled with impressionistic brushstrokes and vibrant colors. Between 1943 and 1947, he produced about 75 oil paintings and 30 gouaches in this new, sunlit style. He coined his new method of painting “Sunlit Surrealism” and while his iconography remained just as strange—pears with faces on them, nude women changing colors—the style, sometimes referred to as his Renoir style, had more in common with impressionist painting than his earlier, smooth brushstrokes.

Though bright and colorful, it is open to debate whether these images were sincerely meant to be pleasant, or if there were subversive aims under the cover of delightful imagery. Magritte himself remarked that “Charm and menace can enhance each other through their union.” Perhaps then, these colorful colors are not escapist, instead enhancing and calling attention to the violence of the times. Some of his paintings underscore that reading, with gruesome subject matters, like a girl eating live birds—hardly charming.

“Vache” literally means cow, but “vacherie” means “playing tricks” which Magritte was certainly doing with this series which was ultimately ridiculed.

Again intimately tied to the war, Magritte underwent another stylistic shift. In 1948, over the course of five or six weeks, Magritte went into a frenzy, creating caricature-style, Expressionist-tinged paintings in a series of 17 oil paintings and 22 gouaches for his first Parisian solo show at the Galerie du Faubourg. Again, the works were very different. His brushstrokes were thick, like in paintings by Vincent van Gogh (1853-1890), while the subject matters and cartoon, mask-like faces evoked the work of fellow Belgian James Ensor (1860-1949).

The effects of World War II inspired many of the so called “Vache” works. Works like Famine, The Cripple, and Sea Sickness — formerly titled Daily Evacuation — harken to the hunger, black market trading, wounds, and migrations that served as reminders of the recently ended war.

Because they were not commercially successful, many of these works were owned by Magritte’s friends Louis Scutenaire and Irene Hamoir who then donated them to the Royal Museum of Fine Arts of Belgium.

When presented together, these two phases reveal drastic — yet very different — reactions to war. The first responded to an ongoing and perilous situation with sweetness and vibrancy while the other made caricature of serious issues and conveyed chaos through the slathered paint applied to the canvas. Though there have been European presentations of these paintings, this will be the first presentation of the two periods together in a dedicated gallery. This framing asks the audience to consider the two series as affiliated experiments addressing a related set of questions about the purpose of art.

Reading the series alongside one another reveals common subject matter. There is a cartoonish quality to the sinister pear-man in the Renoir-tinged Lyricism even if he seems turned to strike something, while the thick outlines of Magritte’s Vache figures also seem lifted directly from comic books.

But what stands out even more is the shared interest in radical painting techniques. While his earlier work is composed — as is his later work — the painting style of the 1940s embraced choppiness and chaos on the level of paint. The colors are part of his artistic break. His altered style is an essential part of his experiment — drawing on modernist masters but combining humor, irony, and strange visuals seemingly in conflict with the nature of these earlier artists’ styles.

From the Impressionists, he took their painting style, but did not take their focus on leisure activities. In Magritte’s “impressionism,” there are no beautiful landscapes, only strange unsettling skies during war. While the Impressionists created art rooted in subjectivity — with each brushstroke representing a point of light as perceived by one point of view at one time — Magritte thought of these brushstrokes as a filter, applied over whatever image he imagines, even ones drawn from decades prior. By removing the temporality and uniqueness of each brushstroke, Magritte sapped Impressionism of its subjectivity for his own ends.

Vache, with its meaning of ‘cow’ plays on the beastly-moniker “Fauve” given to Henri Matisse and other painters in 1905. 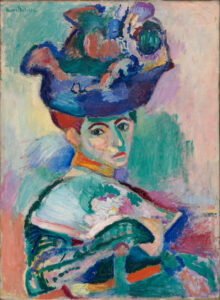 Similarly, many Vache period works look like Expressionist and Fauve paintings, but the vibrant palette they share is used with more irony here. The fauves celebrated bright colors, while Magritte’s colors distract from the grim psychological reality apparent in his humorous, yet deeply damaged renderings of people affected by war. Thus, while there is a surface similarity, the ideological drive of Magritte’s work is more indebted to dark caricature than fauvist portraiture like Matisse’s Femme au chapeau.

Because of their focus on style, these series are essential to understanding Magritte’s evolution as a painter. SFMOMA’s presentation of Magritte begins in the 1940s with these radical changes in order to call attention to his relationship to painting as a practice, a major concern for the rest of his life. While Magritte ultimately returns to a compact manner of painting, he brightened his palette and refined his brushwork in ways that, while less overt than the experiments of the 1940s, mark a significant change from his paintings of the ’20s and ’30s. As his sunlit and Vache periods demonstrate, the turmoil in his painting was greatest in the war-torn ‘40s, and Magritte, like the world, remained forever changed afterwards.

Alex Zivkovic is a Project Research Assistant in Painting + Sculpture at SFMOMA. A recent graduate of Stanford University, Alex is a writer and editor based in San Francisco. Academically, he is interested in Surrealism, animal studies, and queerness in modernist media and will pursue a PhD in Art History and Archaeology at Columbia starting Fall 2018.
read more